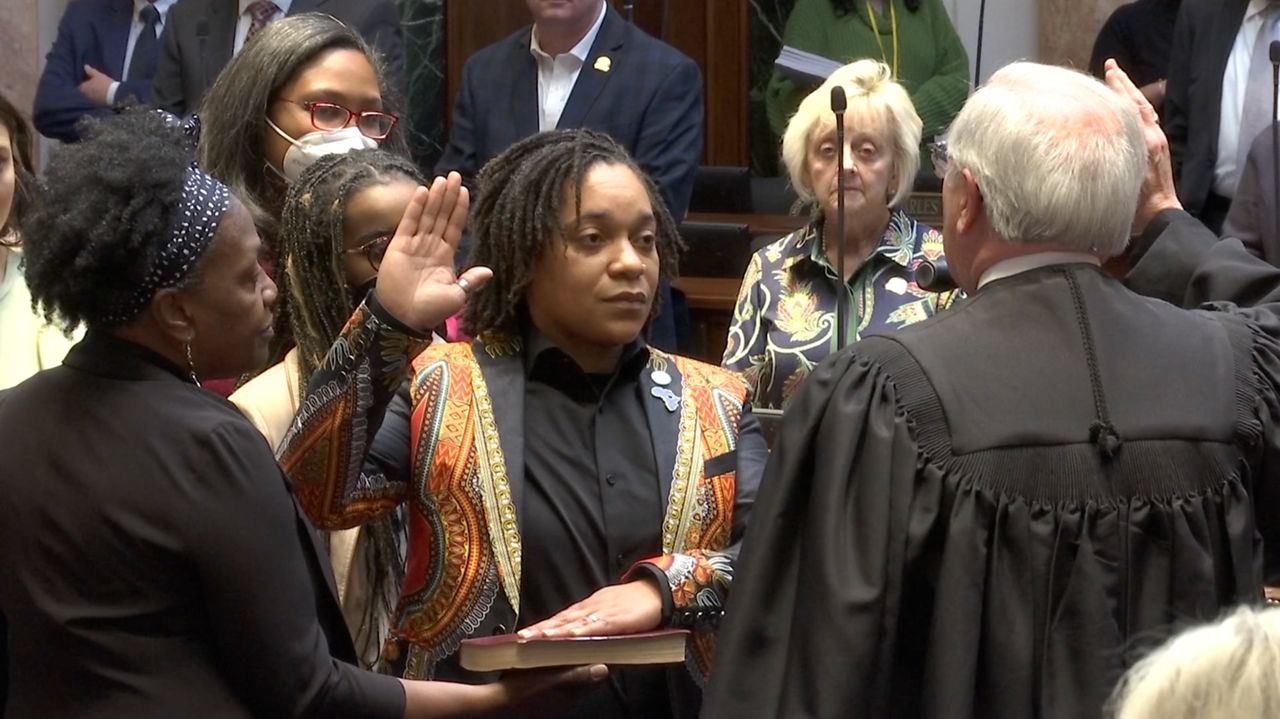 FRANKFORT, Ky. — When Democratic Rep. Keturah Herron was elected to the Kentucky State House of Representatives during a special election on Feb. 22, 2022, she made national news.

Louisville’s 42nd district voted her in to serve them, which also made her the first openly LGBTQ House representative to serve in the Commonwealth’s history. The lawmaker told Spectrum News 1 that while history is important, “I have these different layers.”

Rep. Herron’s mom was by her side, holding the Bible her daughter’s left hand was placed upon, when Kentucky’s House floor erupted with applause after Herron was officially sworn in as a Kentucky House representative.

“We already talked a lot, but in the last couple of weeks, it’s like sometimes I’ll talk to her three or four times a day,” Herron told Spectrum News 1. “And I had to tell her the other day like, ‘Moms, I can’t talk that much during the day,’” Herron added, while laughing.

The soon-to-be-42-year-old then went back to being serious and said her mom has spoken a lot recently about how she used to speak about what it meant to ‘create a sense of fairness’ with Herron and her siblings.

“Sometimes you learn things as a child, but you don’t really know all of different things that you learn, and so when I think about who I am, and like the bedrock and where that comes from, you know, I just think that that’s what it is. It’s to create an environment where things are just and fair for people,” Herron said.

Right after her swearing-in ceremony, Herron got to work on the House floor and filed her first bill, HR 644, which aims to establish an office of gun violence prevention.

“And one of the things that I believe is that when we talk about gun violence, we don’t talk about the long-term trauma,” Herron said to two lobbyists with Passport Health Plan with Molina Healthcare during a meet-and-greet meeting in the lawmaker’s office last Thursday.

Herron said most of her days in Frankfort are packed with meetings, with constituents to caucuses. Plus, with the General Assembly still in session until April 14, 2022, she also spends a lot of time on the House floor.

“I think we really need to change the narrative of gun violence and really talk about how that impacts the victim’s family and also the perpetrator’s family,” Herron said. “So I want to look at gun violence from a public health standpoint and really figure out how we can come up with solutions to curb the violence.”

The path she took to become a state lawmaker wasn’t straightforward.

In high school, Herron played soccer and then attended University of Louisville (UofL), studying sports administration and marketing. She was UofL’s women’s soccer team student manager and also a walk-on player who aspired to work in sports marketing one day.

That one day never came, though, because Herron’s first full-time job working with youth at Maryhurst in Louisville, changed her career path.

“I don’t know that Maryhurst prepared me for this exact moment, to be a legislator or to create policy, but I do believe that if it wasn’t for that experience, I probably wouldn’t have gotten into this field,” Herron explained. Maryhurst offers a residential program for girls who have a history of trauma, abuse, and neglect and don’t have a safe place to call home.

Herron, who has a Masters in Corrections and Juvenile Justice from Eastern Kentucky University, said she learned important lessons about creating policy from leadership training she took part in with JustLeaderhipUSA. The New York-based organization advocates for criminal justice reform by training emerging leaders who have been directly affected by the system.

“And everybody has a different outlook, but the main thing is understanding what the value is in the issue,” Herron said.

On YouTube, there is a video of her sharing her own story about how incarceration affected her family.

“For four years, I supported you. I was at every basketball game. I made sure you had everything you needed. You were a star. Actually, you still are a star,” Herron told the audience as she continued to speak about her second-cousin, who she took care of when his mother was incarcerated for five years on felony drug charges.

Herron told a hopeful story of her second-cousin going to college on a scholarship. However, he eventually dropped out and months later was incarcerated for drug charges.

“Forgive me for not seeing that you needed to heal. Heal the loss of your mother. Heal the pain of seeing your mother on drugs. Of knowing your family sold drugs. Healing of the shame. Heal five generations of incarceration, mental health, abuse, and abandonment in our family in Kentucky,” she said.

Walking the halls at Kentucky’s State Capitol, Herron is a familiar face, even if in a new role. Prior to being elected, she was a policy strategist for ACLU Kentucky, who lobbied Kentucky General Assembly regarding criminal and juvenile justice issues.

Herron was also instrumental in the Louisville’s ban on no-knock search warrants, spurred by Breonna Taylor being fatally shot by LMPD on March 13, 2020, during a no-knock raid, and the social justice protests that ensued. Then, in April, SB 4 became law, which made some changes to Kentucky law regarding no-knock warrants, which Herron also lobbied for.

“One of the things that I’m realizing is that the goal is to listen more than I talk,” Herron replied when Spectrum News 1 asked her if being back in the Capitol feels different as a lawmaker versus a lobbyist.

“At the end of the day, you have to be willing to sit down and talk to people, and it doesn’t mean that you are going to agree. Just because you don’t agree on this one policy, doesn’t mean that you can’t agree on two or three pieces of policy down the road,” she explained. “But at the end of the day, I do believe that we have to be creating policy that creates justice and equality for all people in the Commonwealth.”

On Sunday, USA TODAY announced its honorees for Women of the Year across all 50 states, Washington and Puerto Rico. Honorees include Simone Biles, Melinda French Gates, and Vice President Kamala Harris, among several others. Herron also made the list.