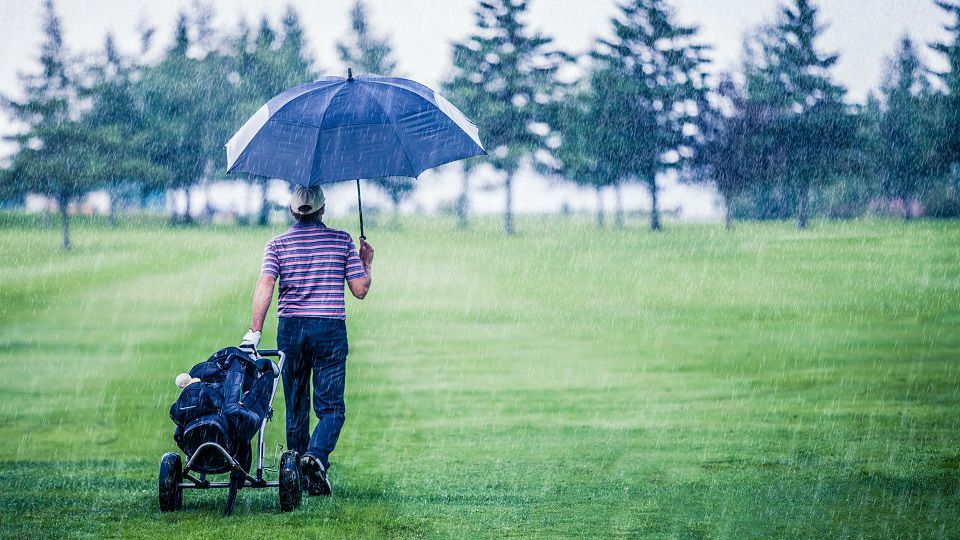 What the chance for rain really means

When it comes to a chance for rain in your forecast, there's a lot that can get lost in translation when your meteorologist tells you showers are on the way.

I recently sat down with Sydney Kelly, a woman who lived through the recent weather-related catastrophe that devestated the electrical grid in Texas. She and her family made it through the event together, but her new claim to fame was through the creation of a viral TikTok post that reached millions of people in a matter of days.

Her post was about what the "probability of precipitation" or "chance for rain" actually meant and it gained international attention when comments began to flood in from opposing opinions across a spectrum of answers.

Sydney and I talked about how she felt about the post and about what "probability of precipitation" meant to her as the dust started to settle.

Sydney used a TikTok tool called "Stitch" to respond to another woman's video. The woman posed the question, "What is something you found out late in life that you should have known earlier but you just didn't."

What does “chance of rain” ACTUALLY mean?? Not what we think. pic.twitter.com/n33z3ZPCNi

She responded by saying, she thought the probability was simply that - a probability! It never occurred to her that it reflected on the specific area that was forecasted for.

Sydney told me that while she would be able to explain to someone else what the term means now that millions have taken to talk about the matter on social media, it is ultimately much more complicated than she originally thought. Despite the events that unfolded from extremely cold weather during the middle of February in Texas, Sydney told me that her dive down the weather-lingo rabbit hole was unrelated to the record-breaking cold in the Lone Star state.

Going forward, it is Sydney's opinion (and one of dozens of other meteorologists across the country) that the most effective way to communicate the chance for rain in a forecast is to do away with the percentage altogether. In its place, she feels that phrases like "scattered showers" or "isolated heavy rain" will speak louder than numbers when informing people how likely rain will be for their area.

How it's used at Spectrum News

At Spectrum News, we may often indicate a chance for rain for a local audience or across a larger area. 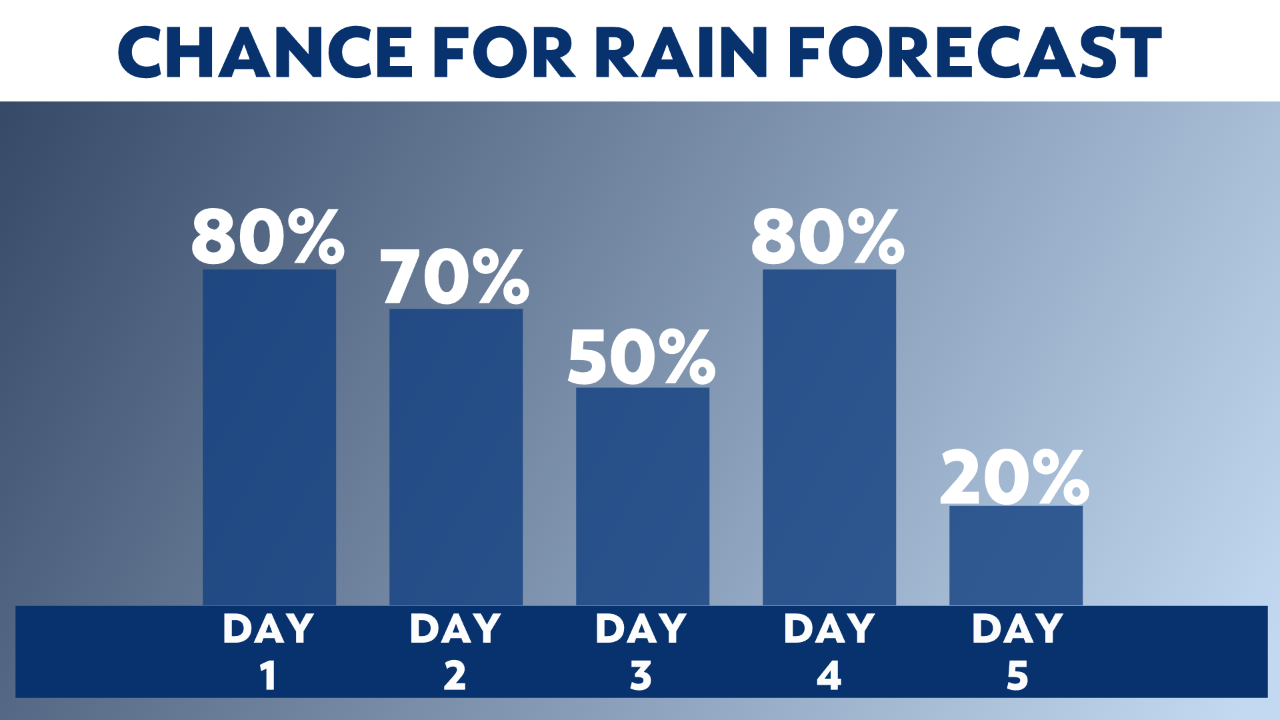 A 7-day forecast will usually show daily chances for rain throughout the next week. This is typically issued for the most populated part of your area, likely a large city and its surrounding neighborhoods, and indicates a chance for rain for the daytime hours of each day. 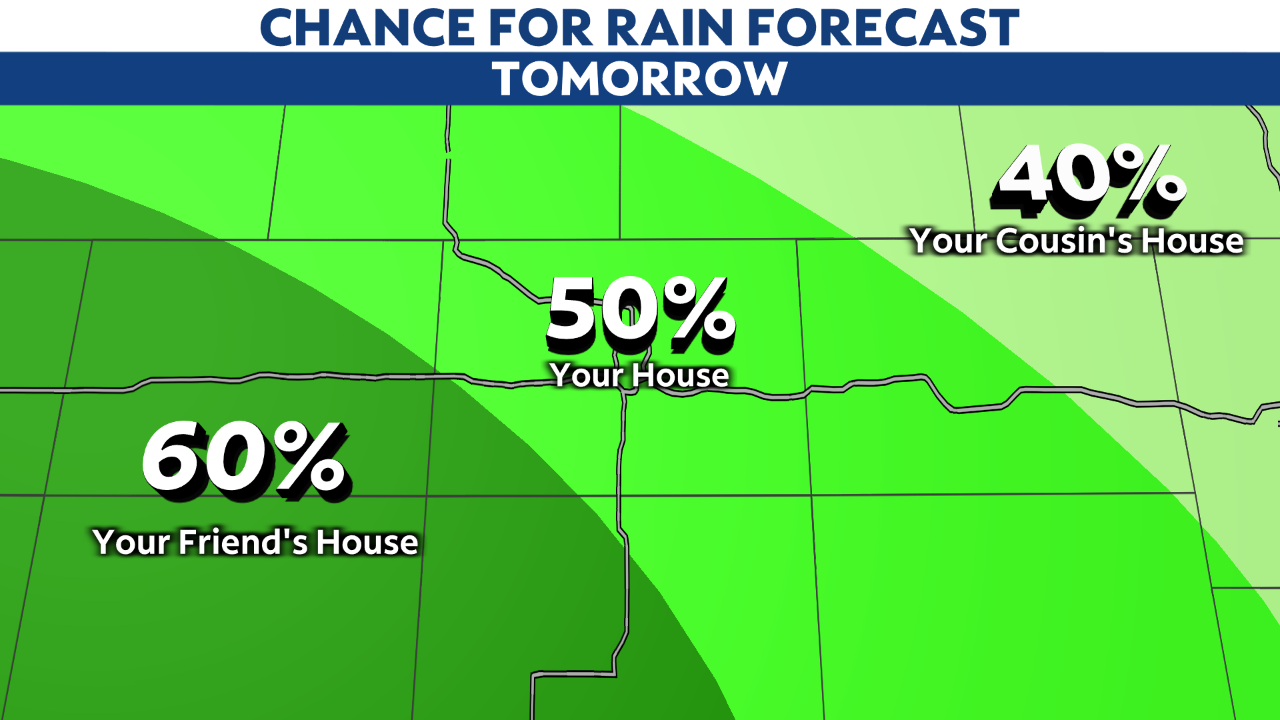 When you are making your plans based on the forecast, the most important thing you can do is listen carefully to where and when the meteorologist expects rain to fall. It also doesn't hurt to pay attention to how the forecast changes over time so that you can see if the confidence in rain is trending more likely or less likely as you approach a specific day of the week that you're watching for.

Sydney ended our interview realizing that not knowing what the chance for rain meant, changed her outlook on how accurate weather forecasters really are.

"I feel like weathermen and meteorologists are getting a rap. They're wrong less than we thought!"