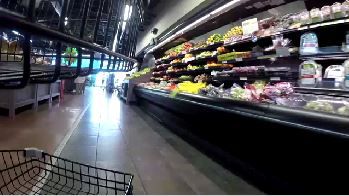 LOUISVILLE, Ky.-- As some 120,000 Louisvillians face food insecurity, some are pushing for new types of grocery stores to open shop within the areas of town designated as food deserts. The Louisville Association for Community Economics (LACE) is hoping to establish a cooperative grocery store called Louisville Community Grocery, much like the Good Foods Co-Op in Lexington. At least one resident of Old Louisville says it's desperately needed, and suggests allowing neighbors like herself work at the stores.

Lauren Gawthrop touts the purpose of the Lexington grocery co-op, Good Foods, "you're part of our mission, which is to make local food accessible to all people," she explains. The cooperative literally has community buy-in; consumers can buy shares, and thus vote on business decisions. This way, Gawthrop says the store is not likely to leave the community it serves.

That's what sounds appealing to Louisville resident Linda Vidales. She lives in an area that's deemed "food desert," with lack of convenient access to nutritious foods. "You wind up eating a lot of crappy food, you know. Canned whatever," says Vidales.

"There's a store half a block away. No eggs. No bread. No milk. But lots of beer," Vidales adds.

This is why LACE has been working to found the Louisville Community Grocery. The group wants to open one, maybe two, smaller grocery stores in areas that lack them.

Herron, who volunteers with LACE, has been helping head-up the push for the stores. She says funding is their first mission. They expect it to take $1-2 million to build the stores, so they're working on fundraising while they meet to plan the business once a month. They will launch an ownership campaign this summer, when neighbors can buy shares of the future store. They're looking to build in the area of Old Louisville, Smoketown, Shelby Park, and Russell, Shawnee, and Portland.