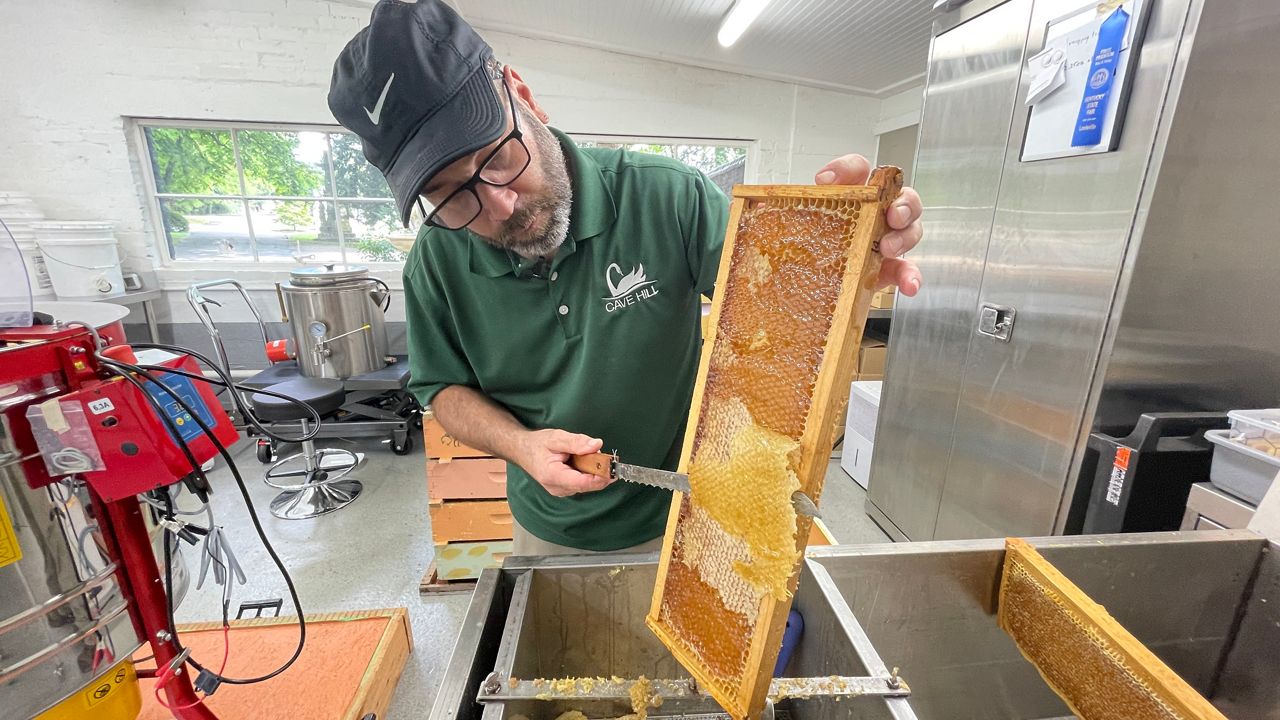 How Kentucky's largest cemetery got into the honey business

LOUISVILLE, Ky. — Cave Hill Cemetery is the final resting place for legendary Kentuckians like Colonel Harland Sanders and Muhammad Ali, but over the last few years, the Louisville landmark has broken into a new buzzing market; beekeeping.


The cemetery’s head arborist of over 15 years and now head beekeeper, Roger Martin, explained that around 2016, leadership at Cave Hill backed the idea of caring for its own colony of bees. Before this, an independent beekeeper named Rodolfo Bernal kept bees on the property, and still does today. 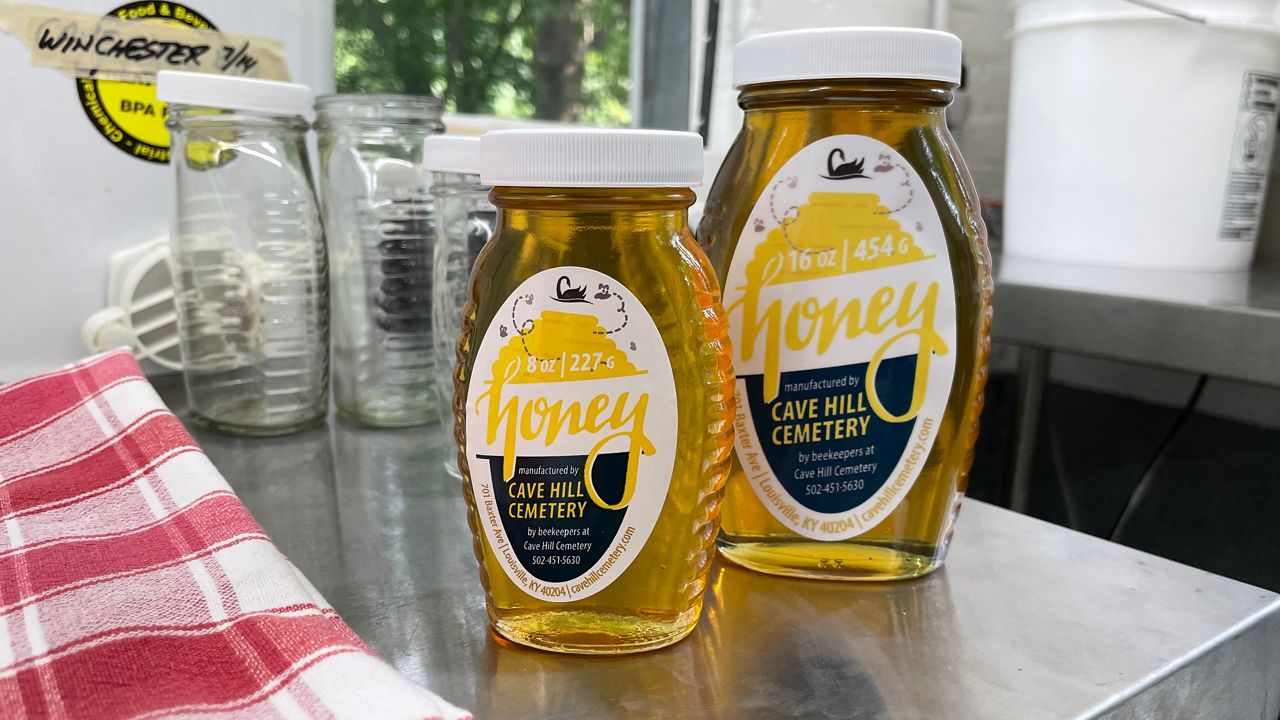 In 2017, the first jars of Cave Hill honey were sold. Since then, the cemetery’s bees have produced hundreds of pounds of raw honey—even gaining statewide recognition by winning first place in the 2021 Kentucky State Fair.

“I absolutely never thought I would be a beekeeper,” Martin said.

Martin, who’s an arborist by trade, said this wasn’t where he thought his career would end up, but he’s not complaining. In his years as an arborist, Martin recalls many times when they would have to call in beekeepers when trees had to be cut down.

“It only makes sense that after almost 30 years of doing tree work that I would’ve evolved into a bee and tree guy,” Martin said.

These days, Martin and his team tend to the bees year-round. They also educate others about their program, attend beekeeping conferences and sell honey at festivals and farmer’s markets. 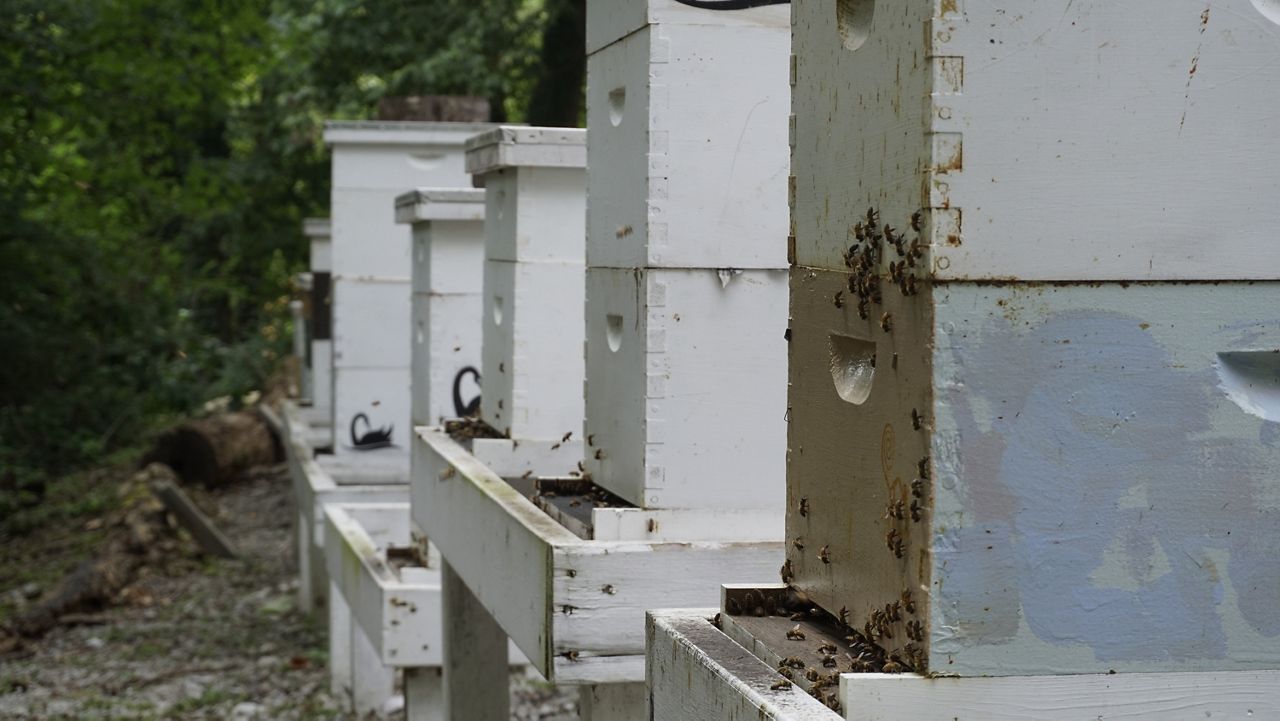 From start to finish, the entire process of producing and bottling honey happens on site. Their work mostly happens inside a converted gardener’s shed near the cemetery’s main entrance.

It was late August when Spectrum News visited the cemetery, right in the middle of a honey harvest. There are gallons of already processed honey ready to be bottled. The processing room is warm and there are dehumidifiers on.

Martin explained there’s a certain moisture level the product has to be in order to be considered authentic honey. Being warm also makes the honey more viscous and easy to pour.

The bees produce honey inside wooden frames, sealed by a “cap.” The caps are cut off and melted down into beeswax. Honey-filled frames are then placed in a machine with an extractor, which spins the frames at a high rate of speed. Honey is then released and filtered, ending up in five-gallon buckets.

After sitting overnight, it’s ready to be bottled.

“And that is the freshest bottle of Cave Hill Honey in existence,” Martin said, holding a bottle of honey.

It’s not unheard of for cemeteries to keep bees. Martin said there’s a growing trend of more locations starting up programs.

“There are bees here, more than we will probably ever know, so why not take the benefit of the bees pollinating everything in our gardens?” Martin said.

Bottles of Cave Hill Cemetery honey are sold on site and sometimes at farmer’s markets or festivals. Bottles are sold by the pound and half-pound.