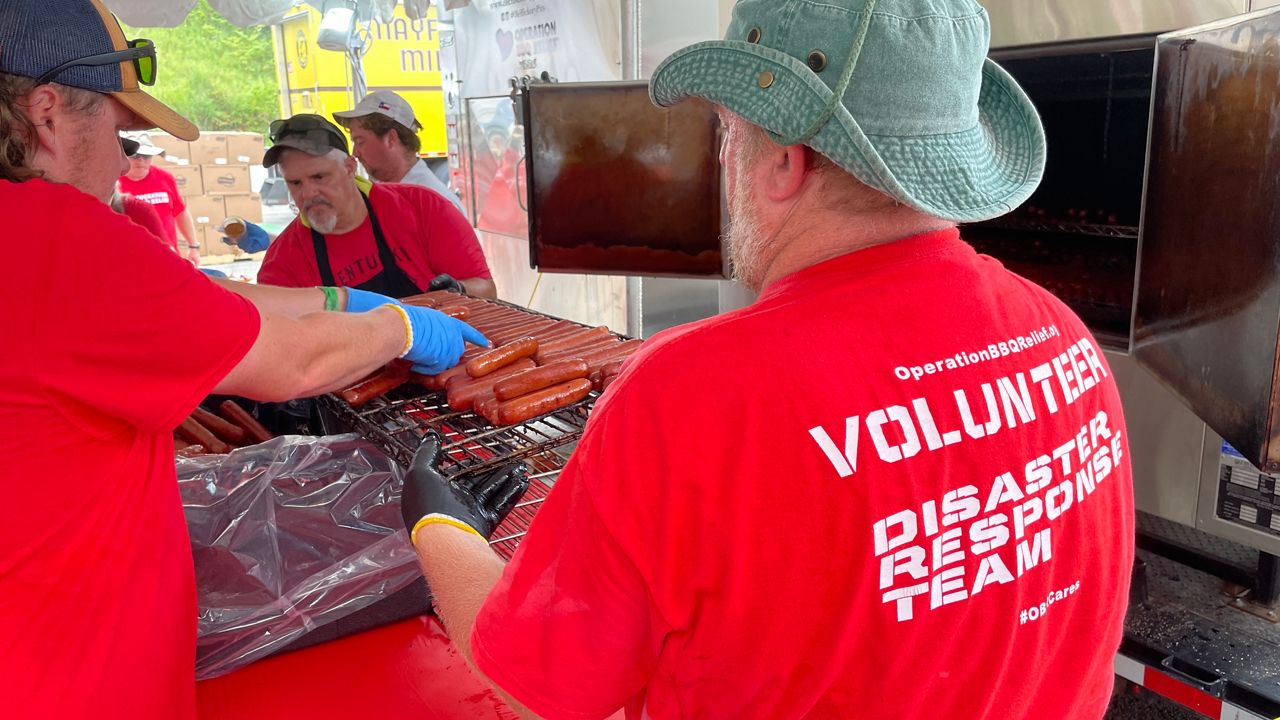 HAZARD, Ky. — In Eastern Kentucky, a small army of volunteers with Operation BBQ Relief has set up their base of operations, cooking enough barbecue to feed thousands of people affected by the historic flash floods. 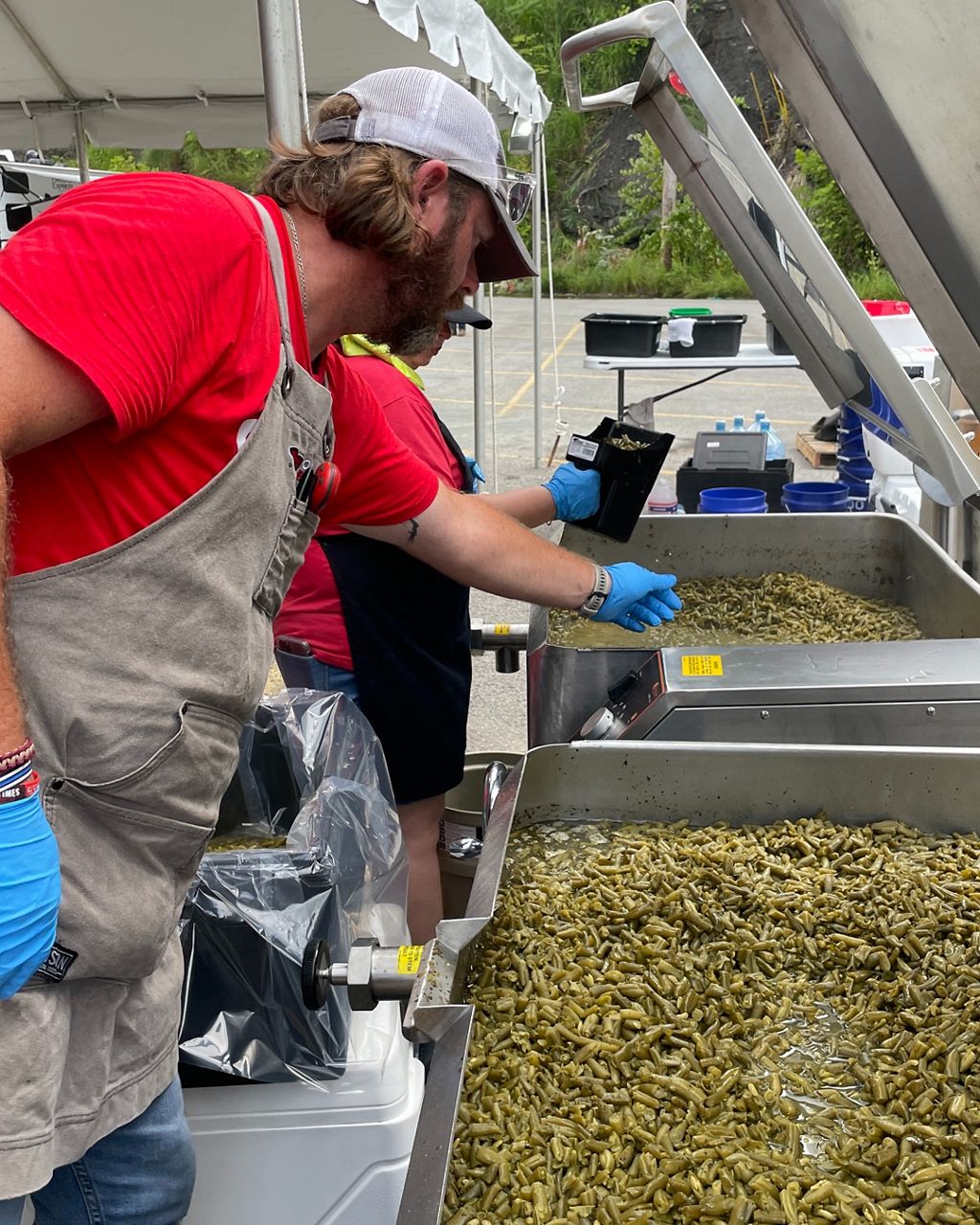 “They’ve been hit with a major catastrophe, a natural disaster, so we try to bring a little comfort food back into their lives, let them know that there are still people that still love them, still care about them and the community is still here to support them,” Jason Perrigin, a seven year volunteer with the organization said.

Normally, Perrigin runs a catering business back home in Tennessee and competes in cooking competitions across the country. But when disaster strikes, he dropped everything to help and arrived in Hazard on Monday.

“They’ve got that kind of need, and so you make sure that they know that they can come back. You know, twice a day and we’ll do it again. If they need a thousand or if they need ten thousand, they just need to let us know and we’ll make it happen,” Perrigin said.

Each day, more volunteers and equipment show up at their base camp in Hazard. By Tuesday, they were able to serve 6,000 meals at a time.

Various organizations like the Red Cross and area churches call ahead to let the team know how many meals they need. Individuals can also receive meals twice a day.

For Linda Combs, who was taking 600 meals to her church, there are no words to describe what having this means to her.

“It’s just amazing. It shows there are still good people, good stuff going on in our country,” Combs said. “People can stop by and get a meal, but our volunteers are also going to load them up, the meals up, and they are going to transport them out to people who can not get out because they are stuck.” 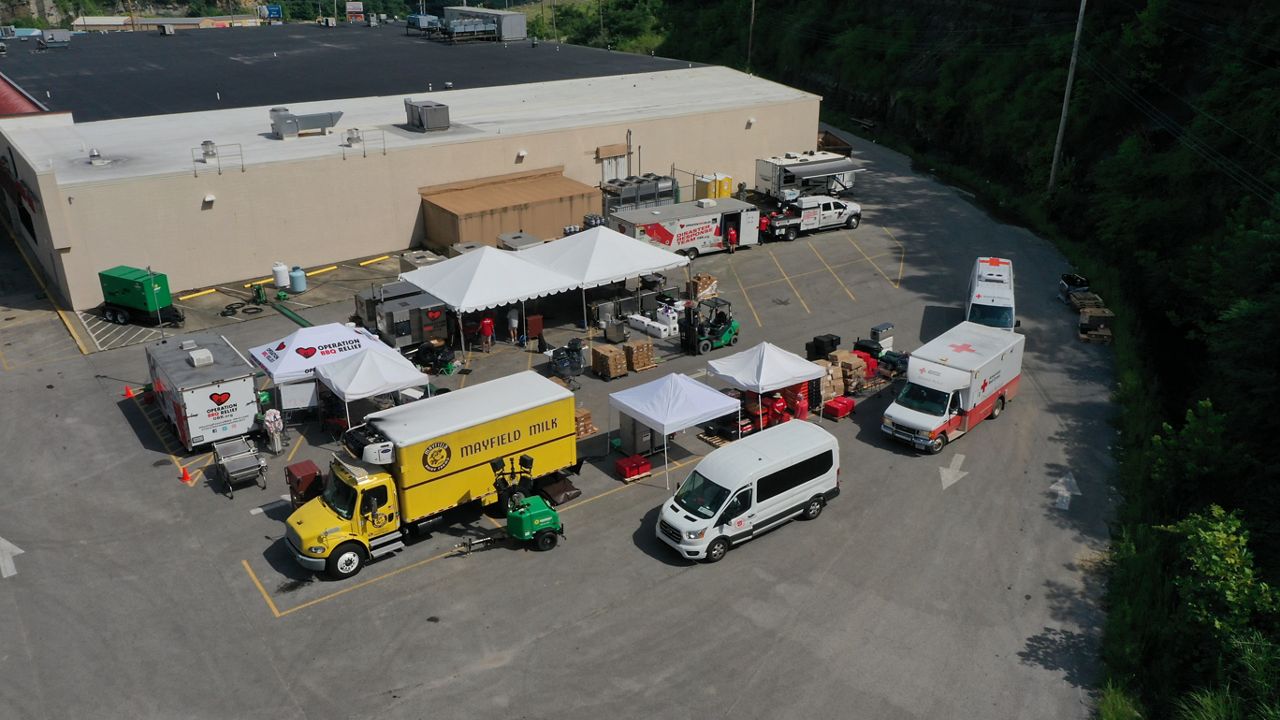 For Perrigin, being here is his way of using his skills to give back.

“Doing something humble in a time of desperate need and you see complete strangers coming up and quivering, shaking, hugging you and shaking your hand and emphatically thank you and tell you how thankful they are that you are here, that never goes away, and that never goes old,” Perrigin said.

Operation BBQ Relief started back in 2011 after the catastrophic tornado in Joplin, Missouri. Since then, they’ve responded to dozens of disaster sites around the globe and have given out nearly 10 million meals.

Their deployment in Eastern Kentucky is still just getting started and leadership with the organization says they’re here for the long haul. Currently, there are around 20 volunteers on site and they could use over a dozen more.

“Funny thing is, most people come out here and they don’t even have any kind of culinary experience. Like we were talking about earlier, they just wanna help and you know you show them the steps, kind of walk them through and next thing you know they’re kind of taking team leads and taken over different things,” Perrigin said.

Operation BBQ Relief is stationed in Hazard at the Food City grocery store and hopes to set up other distribution areas in Eastern Kentucky soon.