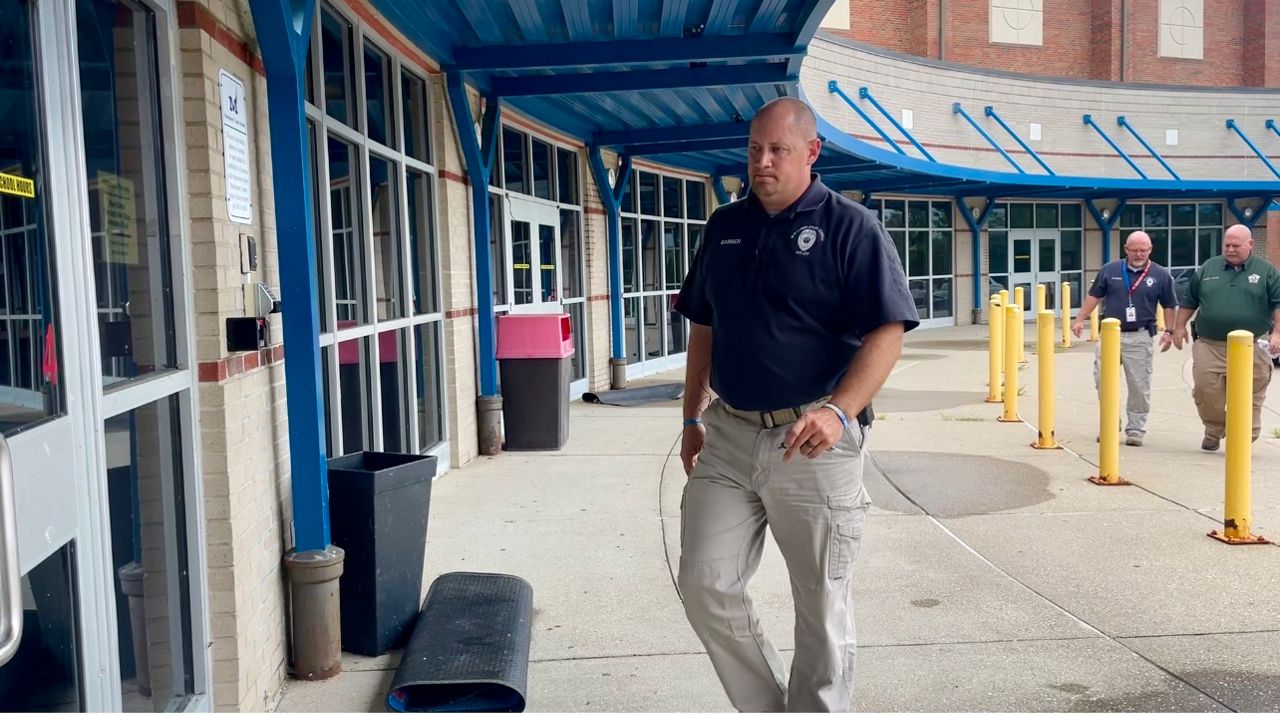 MOUNT STERLING, Ky. — House Bill 63 mandates there must be a school resource officer at all school campuses in Kentucky. That date is now here, but Kentucky is still about 600 SROs short of that goal. That was a number the Kentucky Center for School Safety provided to lawmakers during an Interim Joint Committee on Education meeting on July 15.

In 2019, Senate Bill 1, the School Safety and Resiliency Act, brought about new security programs and encouraged schools to hire an SRO. House Bill 63 takes that a step further by requiring officers on every school campus in Kentucky by Aug. 1, 2022. That date is now here, but there will not be an SRO at every school as students come back to class.

Spectrum News 1 spoke with Ben Wilcox, the State School Security Marshal, about what happens now, knowing many districts could not get an SRO in every school by this set date. He said if funds or personnel are not available, schools need to work out a plan with his office.

Montgomery County Schools has been using SROs for years now. Even with an established force, the district’s Director of Law Enforcement, Chris Barrier, said they still need two additional officers to be in compliance with HB63. For him, funding is the hold-up.

“We are fortunate in Montgomery County that we have been board funded for several years, but in order to reach the mandate that HB 63 requires, we are going to need to have additional funding sources,” said Barrier.

HB63 is an unfunded mandate, so it leaves school districts trying to figure out how to pay SRO salaries. That’s just one common challenge Wilcox hears from school districts.

His office is putting together an annual report at the moment that will provide more information on where the state currently is, and what next steps could be. That’s expected to be presented later this month.

Until then, school districts are preparing to make the next school year as safe as possible with available resources. In Montgomery County Schools, that includes Barrier inviting all first responders in the county out for a tour of the schools.

“I may be the actual first responder, but the calvary is coming. These guys are all going to come. It’s important that they know what we do and how our building is laid out and how they can access areas quickly,” said Barrier.

He said mass shooting incidents like Columbine and Uvalde have taught him that SROs have to be proactive.

“We have to move to the threat, engage the threat and eliminate the threat. That sounds harsh and dry and really militant, but, at the end of the day, if we can engage the threat, we stop losing kids in schools,” said Barrier. “In Kentucky we teach that. It’s called rapid deployment.”

That’s one of many things SROs learn during a required 120 hours of training. While critical incidents are top of mind for many parents, Barrier said safety goes far beyond that.

For example, doors at the school are locked, so guests need to ring in and come to the front office. The doors are also tinted so people cannot see in from the outside. There are security cameras throughout the building. All of these things play a role in overall safety.

Barrier’s daughter attends Montgomery County High School, where he is stationed. His son is at the middle school. Plus, his wife is a teacher in the district. With that personal connection, he handles his job with care.

While safety is top priority, Barrier said a major component of an SRO’s job is to build connections with the students.

“You can see a kid kindergarten through 12th grade. You can see their growth and maturity. It’s really cool to see that. It’s what we do,” said Barrier.

When HB63 was signed, there was push back from the ACLU Kentucky. The organization argued the presence of police in schools disproportionately pushes children of color and children with disabilities into the criminal justice system. Barrier disagrees.

“There’s a train of thought that SROs are bad for schools and there is a school to prison pipeline and all these things. I promise it’s not our intention to come and arrest kids in schools. Our primary focus is to keep them safe in schools, so they can be successful members of their community and go on to college or whatever they choose to do in life,” said Barrier.

Barrier said, while there may not currently be an SRO in every school, he is glad the state is moving in that direction.

The answer to those questions remains unclear. Wilcox said the first step is talking to the districts about challenges, to understand what the state needs to do moving forward. Those discussions are underway.