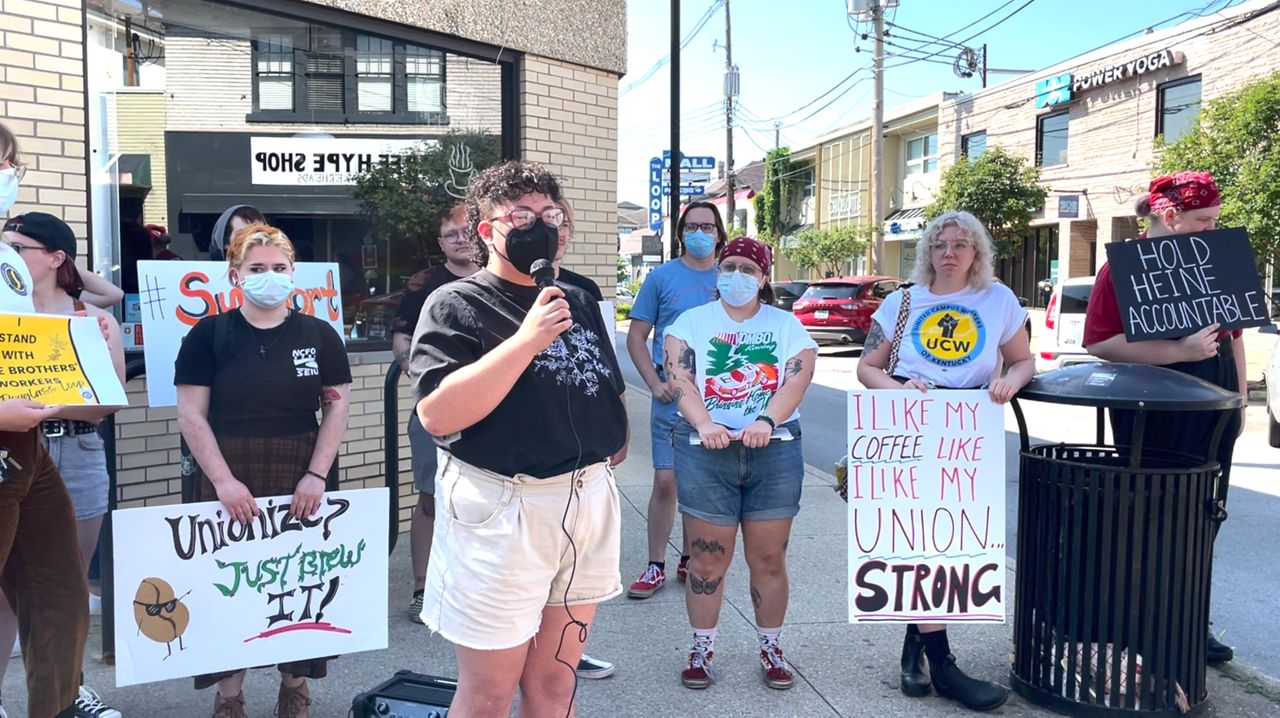 LOUISVILLE, Ky. — Kentucky-based coffee chain, Heine Brothers’ Coffee, closed down its Douglass Loop location in Louisville’s Highlands neighborhood June 30. Employees who protested the following day say they received no notice, and that if they were part of a union, notice would have been given.

On Tues., June 28, 2022 Gami Ray got a text from their employer Heine Brothers’ Coffee to celebrate one year working for the company.

“With a GIF from [the television show]‘The Office,’ which I guess alludes to the fact that we are a fun, cool place to work,” Ray said, while laughing.

Ray told Spectrum News 1 just two days later, on Thursday, when they were finishing their shift, around 2 p.m., some Heine Brothers’ corporate employees came in and held a brief meeting. They asked employees like Ray to help usher customers out because the coffee shop would close early that day. 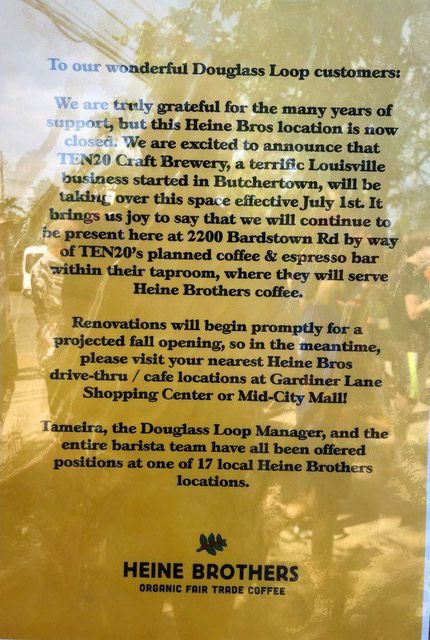 “And then when my coworker for the next shift showed up, they were all standing. It was not like a sit down thing, it was brief. Basically, [Heine Brothers’ Coffee was] like, ‘After much consideration, we are closing the Douglass Loop store effective today,’ “Ray said.

On Friday July 1, less than 24 hours later, Ray and fellow employees gathered Friday outside where they worked just the day before, protesting, and chanting things such as, “What do we want? Unions! And when do we want them? Now!”

The Heine Brothers’ sign at that Douglass Loop location was gone. However, there was a sign posted on the door to explain TEN20 Craft Brewery has taken over the space and will open in the fall. TEN20 also announced these plans on Instagram.

Arthur added that he and council member Keisha Dorsey (D, Dist. 3) are currently working on draft legislation for a “Community Benefits Ordinance.” He said it will require businesses to meet certain requirements, such as minimum wages or allowing workers to form a union if they choose, in order to receive support from Louisville Metro Government to set-up.

In April, several Heine Brothers’ workers announced their plan to join a union and have been working with the Service Employees International Union (SEIU) to make that a reality.

In a Twitter post, Heine Brothers’ Coffee employees organizing to unionize stated, regarding the Douglass Loop closing, “This is outrageous and highly suspicious, considering this location has some of the most outspoken and visible union supporters who have been leading our organizing campaign.”

“Yea, I’m stunned, and I’m still processing that this is happening,” Ray said at Friday’s protest, regarding the coffee shop’s sudden closing.

Spectrum News 1 called and emailed Heine Brothers’ Coffee, but have not heard back from the company.

In a news release Thursday, Heine Brothers’ Coffee co-founder and President Mike Mays stated, “We’ve had a great run at the Douglass Loop and are now turning our attention to operating coffee shops with drive-thrus.”

Spectrum News 1 confirmed Douglass Loop employees received an email from Heine Brothers’ explaining the company “decided last October that Douglass Loops was not viable.” So the company began thinking about a replacement tenant for its lease, which ended up being TEN20 Craft Brewery.

“TEN20 will operate a taproom and a coffee bar in the space,” the email said.

The company also offered Douglass Loop employees two choices: take severance pay or choose to transfer to another Heine Brothers’ location with a stipend also given to help with the transition.

The email stated employees have until Tues., July 5, at 4:00 p.m. to make their decision, otherwise they will be ineligible for both options.

In an emailed statement to Spectrum News 1, Secretary-Treasurer Robert Smith of the National Conference of Firemen and Oilers (NCFO) 32BJ SEIU said in part, “A unionized store with a contract would have received advance notice of a store closure, and the opportunity to negotiate terms to address the impact of the closure on workers. That is why it is so important to support the Heine Brothers’ workers in their unionizing efforts and to meet them where they are.”

As for Ray, they are choosing to stay with Heine Brothers’ Coffee. A big part of that decision is to continue to organize alongside co-workers.