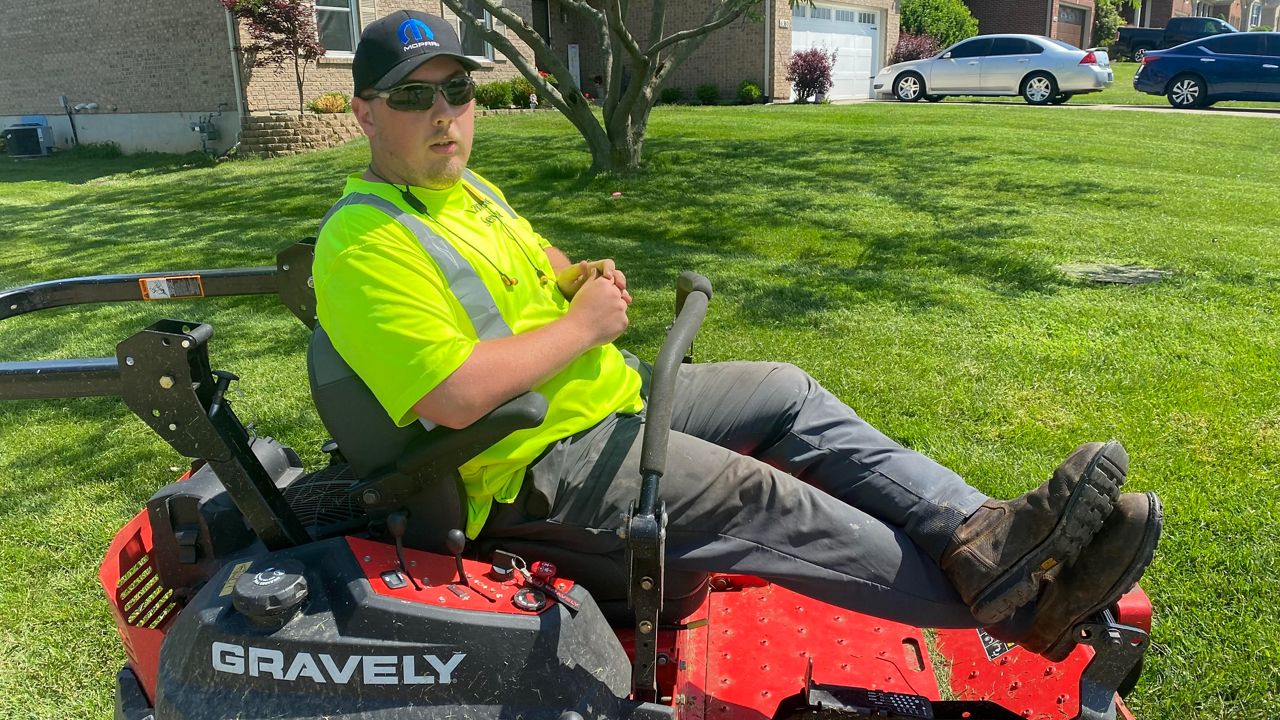 FLORENCE, Ky. — Disbelief in the cost of filling up at the gas station accompanied by subsequent head shaking, is a scenario many people have lived through, especially in recent times, as already high gas prices continue to rise.

For small businesses that depend on fuel regularly, these moments happen even more often, and are even more financially debilitating. To remain viable, businesses often have to pass those increased costs onto customers. That means expensive gas is ultimately draining the bank accounts of people who depend on the services said businesses provide in more ways than one.

At 22 years old, Charles Ackman is young for a business owner, but he’s quickly learned what all of this means for him. Being a quick learner is nothing new to Ackman, who’s had an interest in lawn care for most of his life.

“17 years. Starting when I was five, back where I used to live over in Hebron. [I] Decided to make it a lifetime thing,” he said about mowing lawns.

That certainly is a rare dedication to a particular line of work, but Ackman said that’s what it has taken to establish his business, Lawn Care Services, at a young age, with regular customers who trust his work. 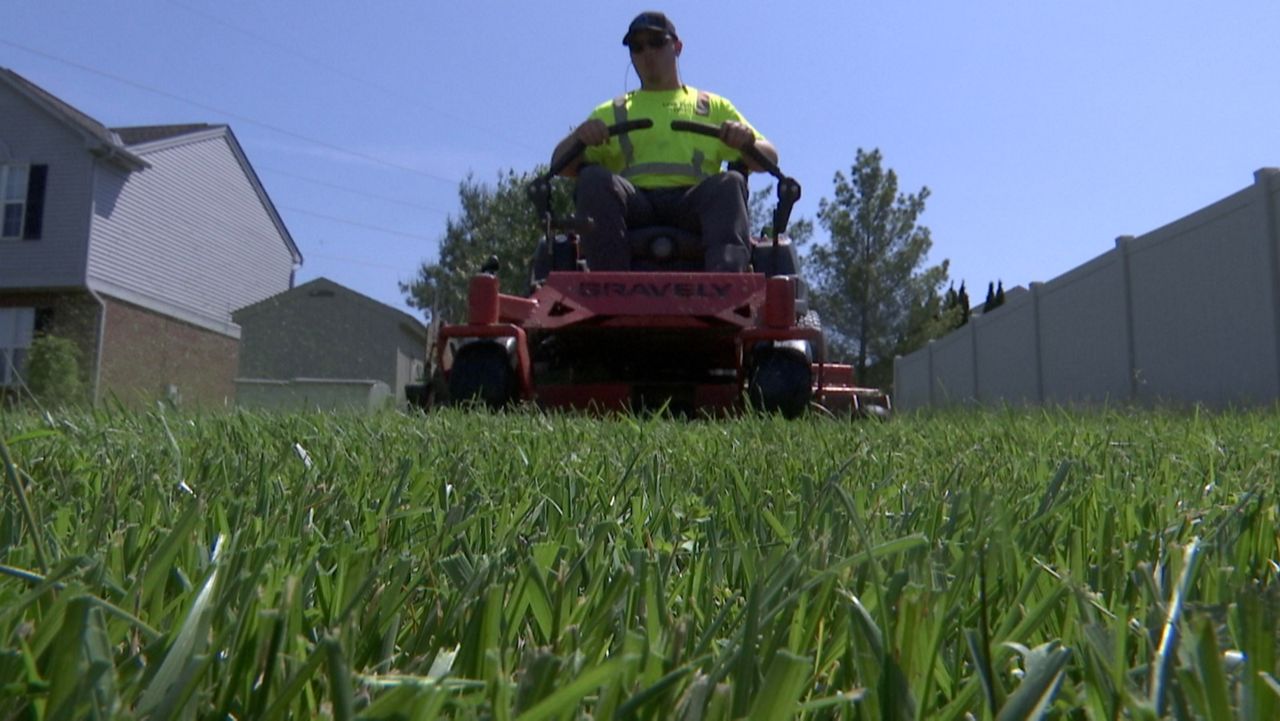 He started out with a humble John Deere push mower, and built his way up to owning both a zero-turn riding mower and walk-behind mower, which are standard for credible lawn service companies. Owning both came with a lot of help from friends and family.

“If it wasn’t because of the people who helped me, I wouldn’t have the things I have today,” he said.

Ackman uses both mowers to give his customers the sharp, uniform lines people expect to see in a professionally cut lawn.

But they both use up a lot of gasoline.

In previous years, Ackman said it might cost him $25 to fill up his zero-turn mower. Now it’s $40 to $50 with average gas prices well above $4 a gallon in Kentucky, according to AAA at the time this story was written.

That adds up quickly when Ackman is mowing 20 lawns a week, eating through a full tank when mowing bigger yards.

“With the way gas prices are nowadays, for small businesses, it’s barely making a buck. It’s terrible,” he said. “I barely make it. I make roughly about $200, if that.”

So while he’s an expert at cutting grass, cutting costs for customers is not an option. He has to do the opposite to be sustainable. This summer he’s charging $35 for average yards, and $45 for corner lots. But there’s a fine line between raising his prices to the point he’s still profitable, and keeping his customers happy and loyal.

“I try to [raise prices]. Some people don’t like it. So I got to stay with the same price I gave them the first time,” he said. “It’s hard, because the way things are going nowadays, no one’s making enough. And I know how that feels, because right now I’m struggling as it is.”

In neighborhoods like Oakbrook in Florence, where many of Ackman’s customers live, homeowners associations require clean cut lawns. So the price for customers adds up, too.

Tonya Barnett said the value she loses with higher costs is at least somewhat recouped in hiring someone who’s reliable.

“It’s a matter of convenience for us at this time,” she said. “You want it to look nice.”

Barnett said the person who cut her grass last summer stole her mower, so she hired Ackman.

“In this day and time, the better you can get the price, the more help it is for yourself economically,” she said. “He’s only been doing it for a few weeks, but he was an answer to prayer. He came by, and started mowing right away. He gave us a very reasonable price. And he’s doing an excellent job.”

Barnett said she pays Ackman extra for his effort.

“He offered us one price, and we actually said that we would give him a little bit more than what he offered. Because we felt like if he did a good job, it would be worth that to us,” she said. 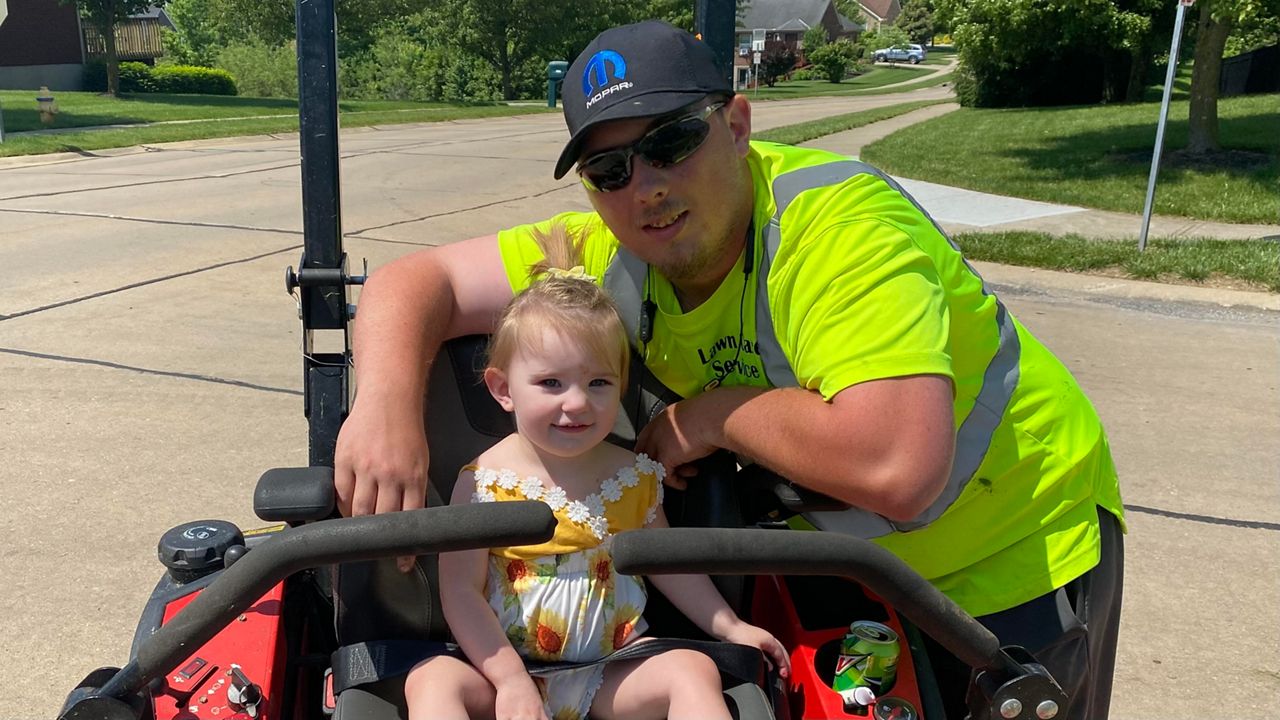 Charles Ackman, seen here with is daughter, says his family is what motivates him (Spectrum News 1/Sam Knef)

Ackman said family drives him. He only spends two days a week mowing, using the other days for other business matters, and to spend time with family, including his young daughter.

“Money can be replaced. Family can’t,” he said.

The challenges may keep growing for Ackman, but as long as the grass keeps growing, too, he said he’ll keep chugging along. Again, he’s dedicated, especially for someone who, in a cruel twist of irony, is allergic to grass.

“Mother nature just doesn’t like me, is all it is,” Ackman said, showing off the red bumps on his arm after finishing a lawn. “She don’t like nobody that cuts yard.”

If Barnett is any proof, though, at least his customers seem to.

Ackman said his business also offers other services like gutter cleaning and pressure washing. Lawn mowing, though, is his primary focus during the summer months.