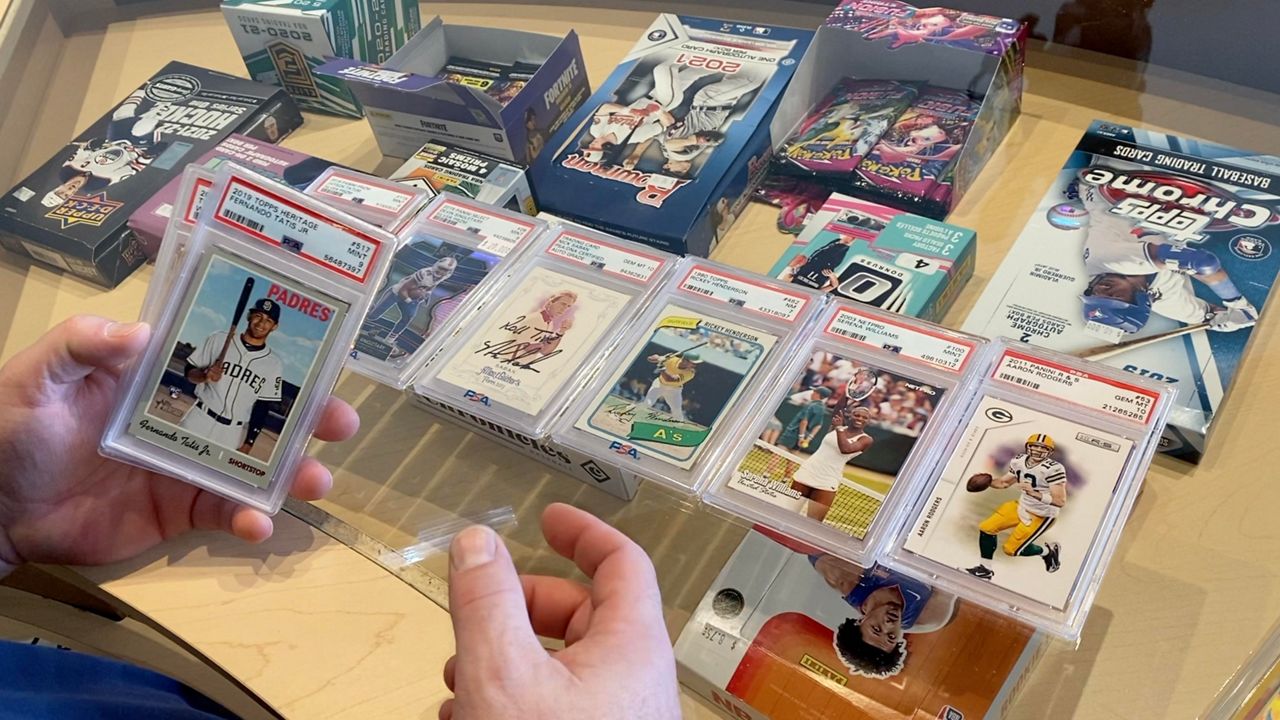 FORT MITCHELL, Ky. — For anyone in possession of an old binder full of baseball cards from their childhood, it might be time to dust them off. The buying, selling and trading of sports cards has skyrocketed in popularity during the COVID-19 pandemic.

One northern Kentucky store is taking advantage of the trend.

Greg Rouse has a lot of sports cards.

“I’ve been a collector since 1971, since I was seven,” Rouse said. “I do personally have close to a quarter of a million cards. And yeah, it’s too many.” 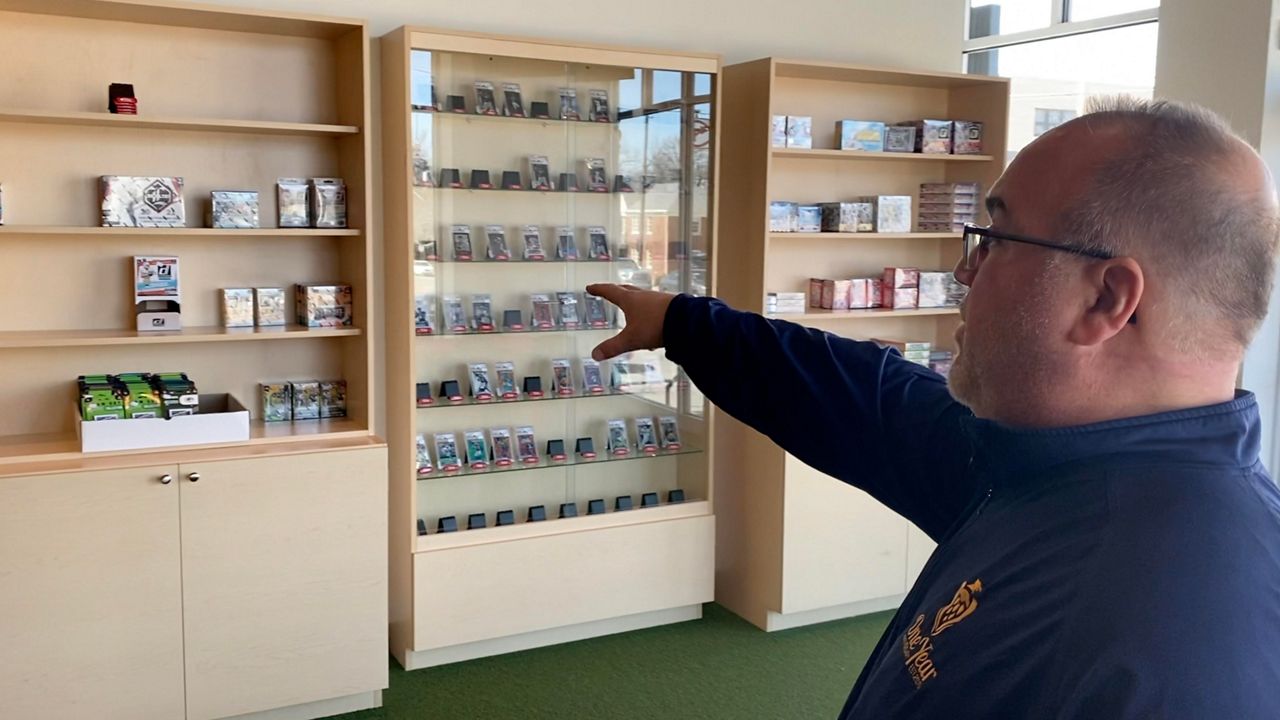 What got him into the hobby?

The “chase” was off and on for Rouse throughout the decades. But during the pandemic, it was back in full swing, for him and many others.

“What I found out about this hobby, a lot of people wound up with a lot of extra time. And it gave me the opportunity to kind of just rekindle my collection, and look and see what I had,” he said. “The card world had been on an upward trajectory, a steady incline. The pandemic put it like this.”

As indicated by Rouse’s hand pointing up toward the ceiling, the industry boomed with record sales and the values of rare cards shooting sky high. Old collectors started coming out of the woodwork, and new ones discovered a new obsession.

Rouse discovered online breaking. “Breaking” in this context means opening cards. People can take part in group breaks online, in which a breaker opens a case of cards, and ships the cards a customer pays for to them.

“You’re paying someone to open cards that you are eventually going to receive some of them,” Rouse said. “And it’s like, you know what, we could do this. We could do this.”

He and his family gave it a shot, building up a Facebook community, HIt Seekers Card Breaks. It now has almost 4,000 members in it.

“We believed that we could be really good at this. And brick and mortar has always been something that we had talked about. Because we’re card shop guys. If we ever traveled, or whatever, we would seek out a local card shop. And at least just stop in and see what they had,” Rouse said.

He gave collectors a place to go with his store, Hit Seekers Sports Cards, which opened March 19, 2022.

“It’s been really amazing. Very well received by the community. We’ve been having a lot of fun. We’ve had great crowds,” Rouse said.

He said the sound of rustling foil wrappers as a fresh pack is ripped open never gets old. 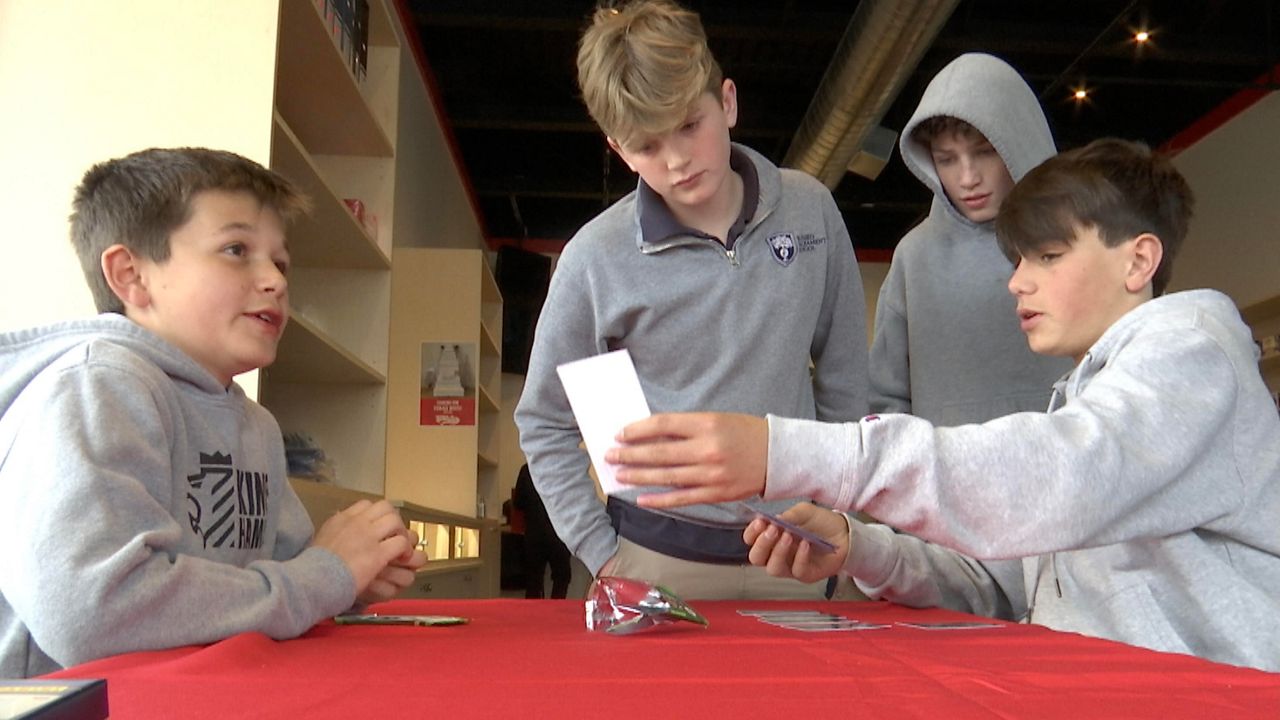 A group of kids who come into the shop everyday after school look at their latest haul of sports cards. (Spectrum News 1/Sam Knef)

“It’s absolutely amazing to see these kids come in. They come in every day after school. There’s swarms of them,” he said. “They ask great questions.”

Some of Rouse’s younger customers agreed.

12-year-old Henry Wahoff said he’s in it for the excitement.

“It’s just fun to get a pack and open it, and see what you get, because you might get something really good, it’s just kind of the thrill of it,” Wahoff said.

This family business is run by a business family. Rouse and his two sons Jake and Evan also founded the Braxton Brewing Company, which just celebrated its seven-year anniversary.

Rouse continually restocks his supply because of the high demand from the kids that come in, and their parents sharing in the fun.

The store also continues to employ four full-time streamers. They stream 15 hours a day, seven days a week. Anyone who doesn’t want to shop in person can pay a streamer to open a pack of cards over a live stream, and ship them the cards.

“So he pulled a redemption card of a one-of-one, that means one of a kind. There are no others. Joe Burrow autograph card. It was such an amazing experience, because he had only been collecting for less than a month. And he really didn’t understand what he had,” Rouse said.

What he had, Rouse estimates, was worth tens of thousands of dollars.

Rouse said he wants people coming in who are looking to sell to be prepared, have an asking price, and know, at least somewhat, what they have. He said he won’t sit down and go through thousands of cards.

Rouse said he may eventually expand to sports memorabilia as well, but for now he’s honing his focus on cards.