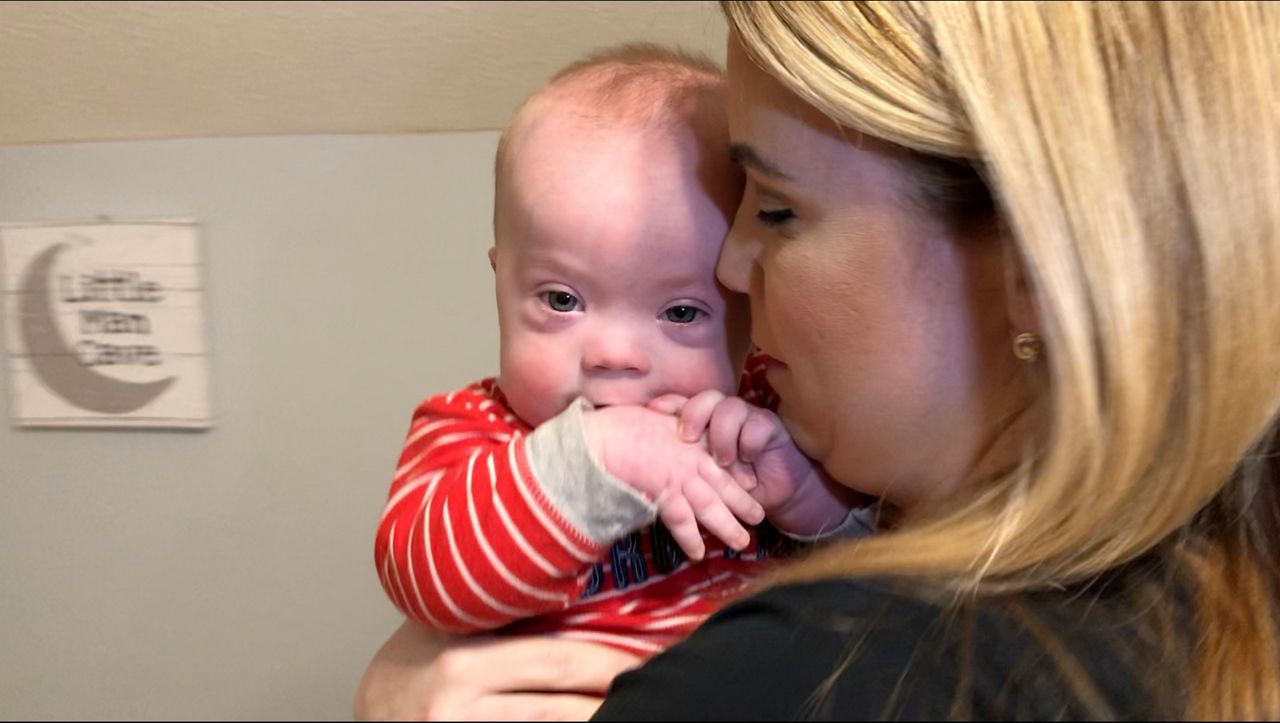 Mom Carolyn Callahan and her eight-month-old son, Brady, right after she picked him up from his crib after a night's sleep. (Spectrum News 1/Eileen Street)

‘He is perfect’: Louisville mom talks about her infant son’s Down syndrome diagnosis

LOUISVILLE, Ky. — Every year, on March 21, World Down Syndrome Day is celebrated to raise global awareness for the chromosomal genetic disorder. It’s a day that has been observed by the United Nations since 2012. It’s celebrated on the 21st day during the third month of the year to signify the uniqueness of an embryo having three copies of chromosome 21, instead of two.

Carolyn Callahan and her eight-month-old son, Brady, have a morning routine that probably looks like most parents who have or has had a baby.

Brady definitely dictates the wake-up time, and once he’s in his mom’s arms, they find their way to the love seat in the living room. Then, it’s breakfast time.

“He was born in the triage room of the hospital because when we got there, I basically walked in, and I said, ‘I have to push.’ So there was no time for medicine or anything, not even time to get the delivery room,” she told Spectrum News 1.

He’s only eight-months-old, but he’s already full of personality.

“Oh my goodness, he has the best smile, and he loves to laugh. He’s very ticklish,” Callahan said, after being asked how to describe him. She also said he lights up every time he sees his big sister, Baker.

While 10 weeks pregnant, Callahan said she took a test to find out if she was having a boy or girl. Instead of getting the news they wanted, she and her husband learned there was an 84% chance their baby would have Down syndrome.

“And so, of course, immediately I start crying. I mean, I was just bawling my eyes out because it wasn’t even on our radar,” Callahan said.

“And then the next words were, ‘So we need to talk about if you want to end the pregnancy,” she added, regarding the phone call she received with the news.

Callahan said she and her husband always planned to have their baby. The option to not have their baby was never an option for them. However, what followed that diagnosis was a wave of emotions, ultrasounds, and unknowns because there was a 16% chance their baby also wouldn’t have Down syndrome. In fact, Brady’s official diagnosis didn’t come until he was one-month-old.

“It’s scary because that’s your baby, and you don’t want anything to not be 100% right with them, and there’s so much unknown,” she explained. “… but now I’m like, ‘Oh my gosh, he is perfect, and he’s our little boy, and I wouldn’t change anything about him.”

So far, Callahan said Brady’s doing great, and he’s hitting most of his milestones.

“But he’s so young; so we still have no idea what the future holds, but that’s the same with every baby. You know, you never know, but we have the extra worry of he’ll likely of speech issues, some delayed speech, so we don’t know what that will be like. We don’t know if he will have some other health issues,” she explained.

Callahan said Brady has already made her a better person.

Callahan admits it took some time to talk about her baby having Down syndrome.

However, when she was ready, she had an instant support group, especially since the nonprofit Down syndrome of Louisville helps families and those with Down syndrome navigate life from the womb to adulthood.

“I have been where you are. I have cried. I have been scared. I have thought, ‘How am I going to do this? Am I going to be a good mom for him,’ and you are,” Callahan said in response to a question by Spectrum News 1 about what she wants to tell other parents who have just received a Down syndrome diagnosis for their baby.

Callahan said kids with Down syndrome are the same as other children.

She added, “They are going to do everything. It’s just going to take them a little longer. They just need what every other kid needs, love and support.”

She said there is nothing to be sorry about, and what helped her the most was receiving the support and encouragement of friends and family who reassured her everything would be okay, and that there are many opportunities and experiences for children with Down syndrome, too, such as participating in the Special Olympics.