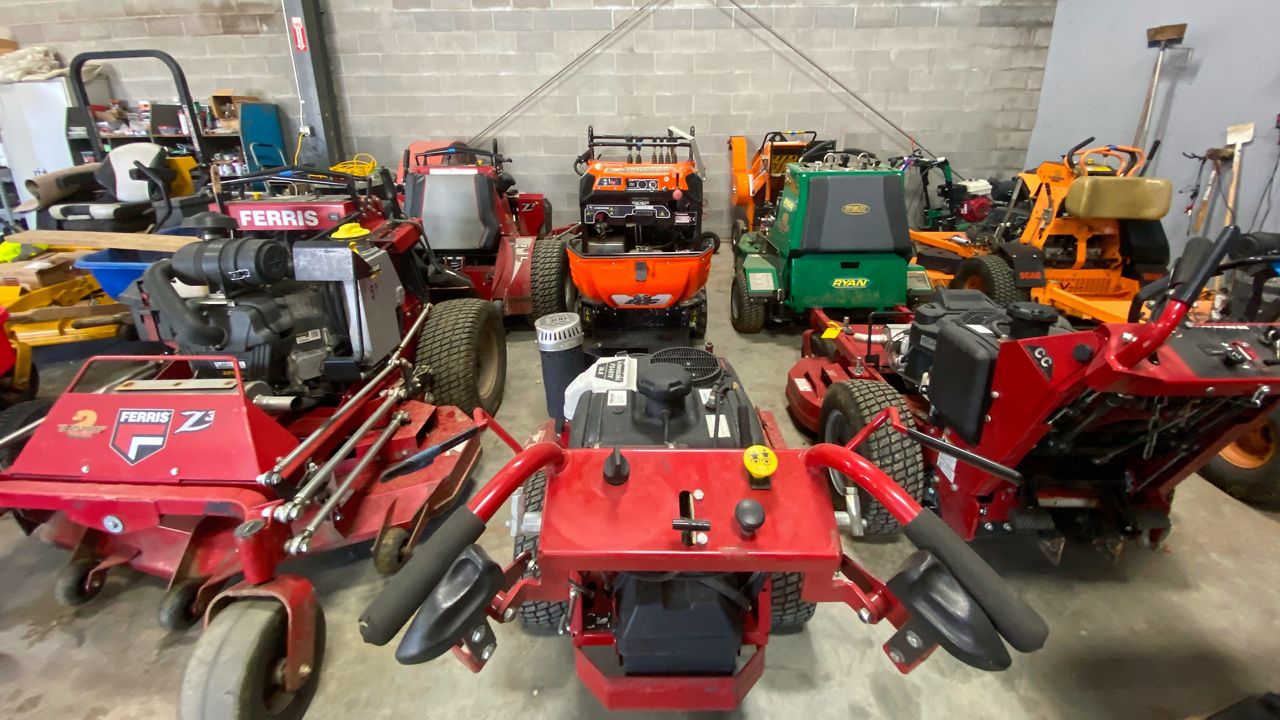 Many pieces of gas-powered lawn care equipment sit at 2 Yard Pros in Louisville. Owners of lawn care businesses have had to adjust to rising gas prices. (Spectrum News 1/Erin Kelly)

LEXINGTON, Ky. — With gasoline prices at near record highs, many businesses are adjusting to offset the cost. One type of business that needs lots of gasoline to operate is lawn care, and as it gets closer to Spring, owners of local lawn and landscape businesses are prepared.


“With the businesses just starting up for the season, people are facing this situation off the bat,” said Allen Caldwell, owner of Allen’s Lawn Service in Lexington. “It's definitely a game-changer and dictates how you operate your business. It makes you look at your business plan and tweak things to survive out here.”

Caldwell said this year marks his third operating the lawn service full time. The first cuts he made were employees, going from five to two.

“It’s unfortunate any time you have to let people go,” he said. “Personnel and fuel are your two biggest overhead expenses. I've cut back on a lot of the landscape work and things of that nature and I'm looking into getting battery-powered equipment, but that's an issue as well, because batteries, in this business, when you're out full-time working, they don't last that long.” Another cost-cutting measure Caldwell will try to implement is “route density,” saying the tighter the routes, the less spent on fuel.

“Sometimes that can work, but you can't just snap your fingers and automatically have a really tight route you service,” he said. “You can go out and market and try to get routes closer to your other customers, so you basically have to look at your routes and try to switch days you mow certain customers to different days. That's the tweaking I'm talking of is trying to draw it in as close as you can each day, so you're minimizing your driving time.”

Another tweak contributing to Caldwell’s effort to conserve fuel is not running the air conditioner in his truck.

“Everything I’m doing is significant even if they seem minor,” he said. ‘But when you go from running an air conditioner system in your truck all summer to not, there's a significant saving on fuel. I’m doing everything I can to keep from reflecting the high cost of gas onto my customers. Everybody manages their business differently and looks at different ways of cutting costs. I'm actually willing to absorb some of this cost rather than put it on my customers to compensate.”

Dave Miller owns Epic Lawn Care in Lexington. He has 15 employees and said he plans to absorb much of the increased cost created by high gas prices.

“We had just raised prices on our customers at the beginning of the year before the gas went up to offset inflation, higher costs for labor and material and everything else,” he said. “After we raised the prices, gas skyrocketed. We're hoping it doesn't last forever, but right now, I'd say we're just going to eat it.”

Miller said he usually deploys eight trucks with trailers hauling equipment every day and, just as Caldwell said, switching to battery-powered equipment is not an option currently.

“Everything is chugging gas,” he said. “The mowers are all gas. I'm very much for spending more money to get battery-operated equipment, but it feels like the technology is just not quite there yet. I'm not going to go buy a bunch of stuff for my guys when the battery's going to die quickly.”

Spectrum News 1 reporter Erin Kelly spoke with David Holobaugh, operations manager for his family’s lawn and landscape business, 2 Yard Pros. He estimated his business uses up to 12,000 gallons of fuel a year to keep equipment and trucks running.

This year, the Louisville-based business is paying about 50% more for gas and diesel, he said.

With five trucks requiring diesel and 10 mowers running on gas, they are considering putting fuel tanks at their shop to cut back on trips to the gas station. They are trying to do what they can to keep costs down for clients and looking at their options, but can only absorb so much, he said.

“It seems like every day it’s gone up, so I’m really not sure what I’m going to pay tomorrow," Holobaugh said.

Louisville Metro Council Member James Peden (R-23) on Monday filed a resolution urging Gov. Andy Beshear and the General Assembly to ask for an emergency waiver from the EPA waiving requirements on the use of reformulated gasoline Peden says costs Louisville drivers more than surrounding communities.