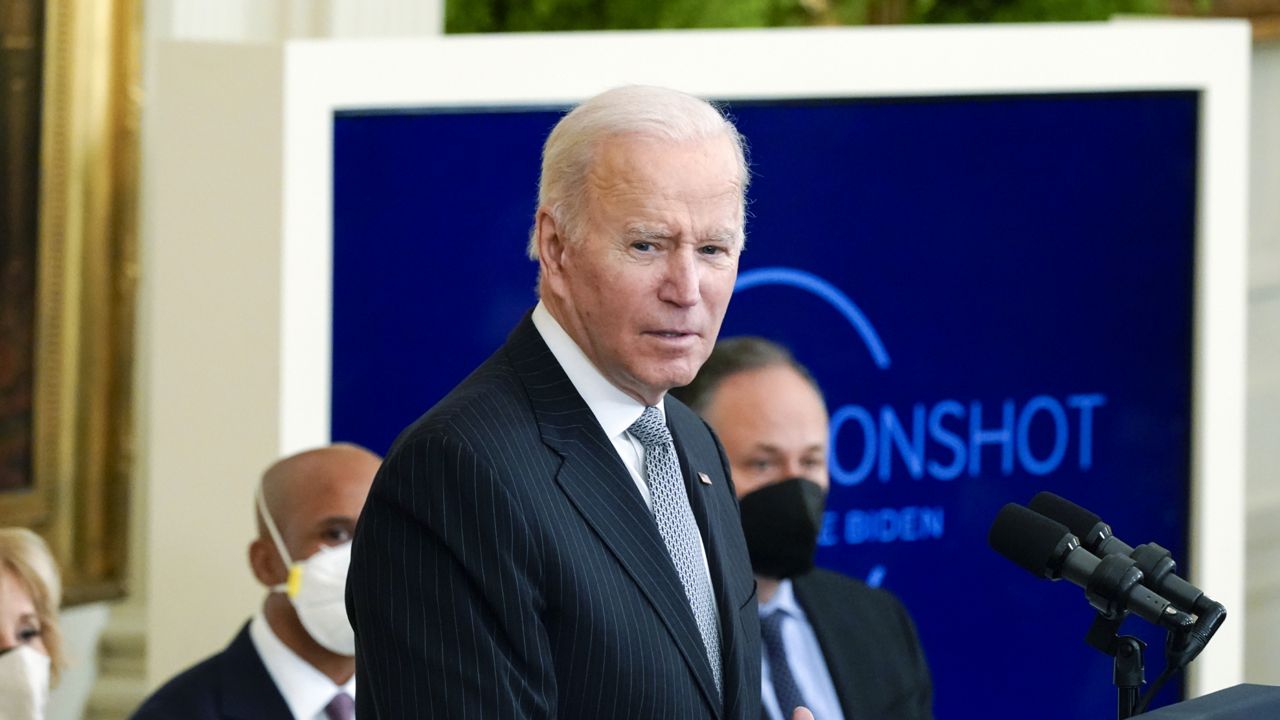 Biden sets ambitious goal to cut cancer death rate in half: 'It's bold. It's ambitious. But it's completely doable'

President Joe Biden on Wednesday delivered his plan to relaunch the Cancer Moonshot initiative, with the ambitious goal of cutting the death rate from the disease in half over the next quarter of a century.

"Today, I'm proud to announce our plan to supercharge the Cancer Moonshot as a central effort of the Biden-Harris administration," Biden said from the East Room of the White House. "It's bold. It's ambitious. But it's completely doable."

"Just as we harnessed science to develop cutting-edge COVID-19 vaccines and treatments, we'll bring a fierce sense of urgency to the fight against cancer," he added.

The announcement, just days before World Cancer Day on Friday, is a personal one for the president: Biden’s son, Beau, died in 2015 from an aggressive form of brain cancer.

It’s also an issue close to the heart of Vice President Kamala Harris: Her mother, Shyamala Gopalan Harris, was a breast cancer researcher who died of colon cancer in 2009.

And cancer is a pain shared by millions of Americans across the country: According to an estimate from the American Cancer Society, there will be nearly 2 million new cancer cases this year, and more than 600,000 deaths from the disease.

The revamped program’s other goal is improving the experience of people and families living with and surviving cancer, with the ultimate aim of “ending cancer as we know it today.”

"Every one of you [has] a story," Biden told a room of attendees gathered at the White House, many of whom either work in the area of cancer research or advocacy. "My message today is this: We can do this. I promise you, we can do this. For all those we lost, and all those we miss. We can end cancer as we know it."

In 2016, the year after Beau’s death, then-President Barack Obama called upon his vice president to lead the nascent moonshot program, with the goal of achieving “a decade’s worth of advances in cancer prevention, diagnosis and treatment.” Congress allocated $1.8 billion to the program over 7 years; roughly $400 million in funding remains.

"I committed to this fight when I was vice president. That's one of the reasons why quite frankly, I ran for president," Biden said of the moonshot initiative on Wednesday. "Let there be no doubt: Now that I am president, this is a presidential White House priority."

A senior administration official said that the White House is “very confident that there will be robust funding going forward,” noting that battling cancer is an issue with widespread bipartisan support.

The president used his speech to urge Congress to fund his proposed Advanced Research Projects Agency for Health, which would be a component of the National Institutes of Health aiming to "improve the U.S. government’s capabilities to speed research that can improve the health of all Americans," in part. Biden has requested $6.5 billion over the course of three years to "drive unprecedented progress in biomedicine," he said Wednesday.

Biden called on the scientific and medical communities to make drugs more affordable and to share more data, something that Dr. Eric Lander, President Biden's Science Advisor and Director of the White House Office of Science and Technology Policy, said is crucial.

"Once you see two or three examples you know we are on to something," Dr. Lander told Spectrum News. "Usually those data are locked up in file cabinets in different states and different cities and if you can manage to share that information, aou can make progress go so much faster."

Biden on Wednesday also announced the new role of Cancer Moonshot coordinator, as well as a multi-agency “Cancer Cabinet,” including the Departments of Energy, Defense, Veterans Affairs and Agriculture, medical agencies including the FDA, CDC and NIH, and the Environmental Protection Agency.

Dr. Lander will "chart the path" for the new iteration of the Cancer Moonshot project, the president said Wednesday.

DETAILS ON THE CANCER CABINET - The Director of the White House Office of Science and Technology talks about how different agencies will work together on this. “The President is pretty insistent that it’s all hands on deck for this.” -@EricLander46 pic.twitter.com/S0q99R6SI3

"The president is pretty insistent that it’s all hands on deck for this," Lander told Spectrum News.

Biden also announced the intent to host a Cancer Moonshot summit at the White House, which senior administration officials said unite "agency leadership; patient organizations; biopharmaceutical companies; the research, public health, and healthcare communities; and others to highlight innovation and progress and new commitments towards ending cancer as we know it."

The president, who was joined by First Lady Jill Biden and the Vice President, also called for Americans to get “back on track” in terms of cancer screenings, noting that there have been more than 9.5 million missed cancer screenings in the country due to the COVID-19 pandemic.

According to research shared by the American Cancer Society in September 2021, over a third of U.S. adults failed to get routine cancer screenings due to fears related to COVID-19 over the prior year and a half. A number of national studies show the decrease in testing was most noticeable during the outset of the pandemic in 2020, when nearly 22 million screenings were either canceled or missed between June - March of that year.

Cancer screenings across the board experienced an uptick last year, but have yet to return to pre-pandemic heights. Doctors have warned there could be lasting effects for many Americans as long as a decade into the future.

The National Cancer Institute (NCI) predicted that over the next ten years, nearly 10,000 breast and colorectal cancer deaths will be “because of pandemic-related delays in cancer screening and treatment.” The estimate “does not account for other cancer types and assumed only a 6-month disruption in care, suggesting the actual excess deaths could be much higher.”

"We have to get cancer screens back on track and make sure they're accessible to all Americans," Biden said Wednesday. "If you were supposed to get a cancer screening during the pandemic, call your primary care doctor today. If you're that doctor, talk to your patients, get a screening scheduled, whether it's in the office at home or through a telehealth visit."

"If nothing else, you and everyone who is listening to you can think about: Have I had a cancer screening? Can I call a doctor and do it? Do I know someone who needs it? It will save lives," Dr. Lander told Spectrum News.

The president's revamped initiative aims to ensure equitable access to screening and prevention through at-home testing, mobile screening in communities without access to clinics and through community health networks, which the White House strengthened during the pandemic.

"We have such disparities in cancer access to diagnostics," Dr. Lander said, in terms of "diagnostics, or treatments, or just patient outcomes, in respect to both race and region."

President Biden has spoken extensively about battling cancer in the aftermath of Beau’s death. In 2016, when Biden announced he wasn’t seeking the presidential nomination, he said he regretted it because he “would have wanted to have been the president who ended cancer, because it’s possible.”

Last year, as president, when touring a Pfizer manufacturing facility in Michigan, he said that “I want you to know that, once we beat COVID, we’re going to do everything we can to end cancer as we know it.”