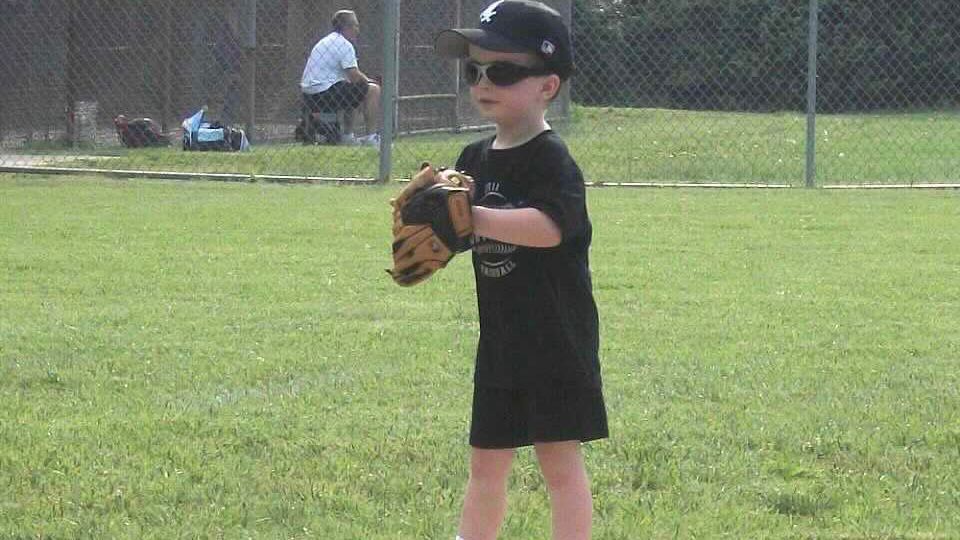 Hunter Wright playing baseball when he was younger (Melissa Wright)

LOUISVILLE, Ky. — When you hear glaucoma you likely think of it as something impacting only older people.

But this sight stealing disease nearly robbed one Kentucky teen of his eyesight and now his mother wants others to know what to watch out for.

When Melissa Wright noticed something wasn’t right about her son Hunter’s eyes, she trusted her instincts and took him to the doctor.

"When he was about five or six months old we were on the beach on vacation and we noticed that whenever we were out on the beach he just kept his eyes closed like he didn’t cry or anything," explains Wright.

What the mother of three could never grasp was the diagnosis: congenital glaucoma.

Often referred to as the “sneak thief of vision,” glaucoma is a disease that can damage the optic nerve.

That lead the Wright’s to finding proper treatment for their son’s eye condition.

"I know the pressure is supposed to be like 10 to 20 and that day the pressures in both of Hunter’s eyes were 32. So you know it was imperative he got that surgery," noted Wright.

Doctor Joern Soltau is an ophthalmologist at UofL Health.

While glaucoma is traditionally found in people older than 60, Dr. Soltau says the disease in rare cases can also affect children.

Specialists say every eye is equipped with a drainage system, but with glaucoma, there’s a problem with the system.

"Glaucoma is basically a plumbing problem. There’s always fluid being secreted to the inside of the eye to bring nutrients to the inside; keep the eye under pressure, so that the eyeball doesn’t collapse," explains Dr. Soltau.

"Unfortunately, early signs of glaucoma are not being picked up and then it drags on and drags on and then causing damage to the optic nerve. If you don’t treat it then it will result in blindness," said Dr. Saltau.

He says the key to preserving your eyesight by early intervention through annual eye exams.

Doctors recommend that every child starting at 2-years-old have an eye exam.

"You’re not really aware that you have any visual problems until it’s too late. So, regular exams and screenings exams is very important to catch it early so you can treat it," adds Saltau.

Under the guidance of several doctors within UofL Health’s hospital system, Hunter who is now 15-years-old, has since undergone three surgeries to slow down the damage in his eyes.

Wright is thankful her son’s eye disease was caught and treated early.

"Be persistent about it. If you feel like something is wrong say something, don’t hesitate. Because in the end it could be detrimental to their life if you don’t speak up," suggests Wright.

According to Dr. Soltau, glaucoma is the leading cause of irreversible blindness. He says among African Americans, the eye condition is more prevalent.

Jan. is Glaucoma Awareness Month and according to the Centers for Disease Control and Prevention, about three million people in the U.S. have glaucoma.