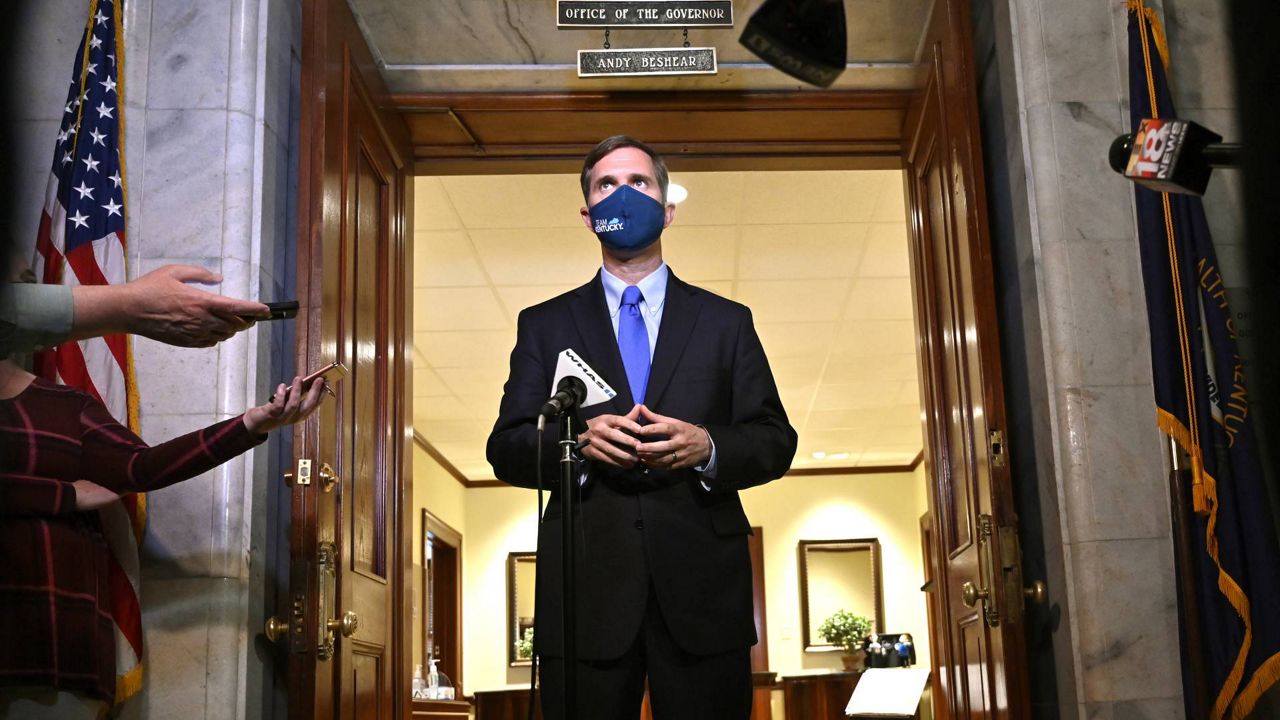 Gov. Andy Beshear is hoping many of his budget proposals draw interests from Republicans in the supermajority. (AP Photo)


“It is a values statement, a chance to seize opportunity, a chance to meet this historic moment,” he said in his budget speech to lawmakers and a statewide TV audience. “A chance not just to tread water but to lead. My budget is titled ‘Our Future is Now’ because now is when we must make the bold investments. Now is our chance to move this state forward – not right, not left but forward.”

Citing record-breaking economic growth and an already-historic budget surplus, Beshear’s bold proposal is one he’s described as taking advantage of the “once-in-a-generation opportunity” Kentucky has to invest in its citizens.

You can read the full executive summary here.

Nearly one week after House Republicans broke tradition and preempted him by filing their own budget bill, Beshear detailed his proposals, some of which are similar to those from House Republicans.

Beshear’s office was caught off guard by the House GOP’s proposal. His spokeswoman, Crystal Staley, said the plan falls short of the “game-changing investments” the governor plans to recommend, including funding universal pre-kindergarten for all 4-year-olds.

“We have the responsibility and the resources to meet this moment. To be bold and to leapfrog other states. Not to tread water or punt on third down,” Gov. Beshear said earlier this week.

So what exactly has the Governor proposed?

His budget starts with investments in the state’s youngest learners, providing two years of universal preschool for all 4-year-olds and full-day kindergarten for every Kentucky child for the first time in Kentucky history.

“No longer will tens of thousands of our children be left out of preschool or head start – programs that we know provide positive outcomes on children’s early literacy and mathematics skills and foster long-term educational success,” Beshear said.

He suggested $75 million to support a state-of-the-art agritech research and development center in the heart of Eastern Kentucky.

“This fund will help communities grow small sites into larger sites. It will help them prepare sites not just to be not shovel ready, but build ready. At a time when speed to market has never been more important, we must invest or get left behind,” Gov. Beshear said. “Let’s give every part of the state the ability to compete for the next big economic development project.”

A $10 million investment in a life science lab in Covington is also part of Beshear’s budget pitch.

Two major bridge projects could see $250 million from the General Fund as part of Beshear’s proposal: the Brent Spence companion bridge project in northern Kentucky and the I-69 Ohio River crossing in Henderson.

Gov. Beshear said he also was allocating $184.9 million over three years to meet a state match that will unlock nearly $774.7 million in federal money for the Highway Trust Fund.

One in three Kentuckians relies on Medicaid, which is why Beshear said he’s proposing fully funding the program through state funds.

“Families across the commonwealth depend on Medicaid. It’s simply the right thing to do to fund this program and expand the services offered through it,” Gov. Beshear said

Another priority in Beshear’s budget is to address the critical nursing shortage in Kentucky. He’s proposed $6 million each year to increase the number of scholarships awarded to potential nurses, doubling the current maximum award.

The budget would also provide $5 million each year for five years to provide student loan forgiveness up to $3,000 annually for each year a nurse or nursing faculty member is employed in their position.

Also included in the budget is funding to extend the $29 per-diem reimbursement rate increase for nursing homes, which expired on the first of the year.

The Governor proposed investing $200 million from the General Fund to make improvements to state parks across the Commonwealth.

Beshear said his spending requests are well within the state’s means, amid record-high revenue surpluses and unprecedented highs for statewide business investments and job creation in 2021.

“This is the best chance in my lifetime of making this state everything we have always dreamed of,” Beshear said Tuesday. “Every single one of these (proposals) is smart, is fiscally sound and is an investment that will pay off in the future. And not one proposal is red or blue, Democrat or Republican. They’re all just good for our families.”

But the Democratic governor’s ambitious proposals could end up clashing with Republican plans to capitalize on excess revenues by revamping the state tax code. GOP lawmakers have House and Senate supermajorities and will have the final say on tax-and-spend matters.

House Republicans filed their own budget bill last week that calls for less state spending than Beshear proposed. And House Speaker David Osborne said this week that Kentucky has a “once-in-a-lifetime opportunity” to modernize its tax system though he didn’t offer any details. In an appearance on Kentucky Educational Television, Osborne said the House plans to accelerate budget work to allow time to tackle the complexities of tax legislation during the 60-day session.

Beshear said Thursday that a tax code overhaul is unnecessary and could be disruptive.

“When people throw out something like tax reform, what they always say is it’s our business climate that we need to improve.” Beshear said at a news conference hours before his budget speech. “We just came off the best year of economic development ever in our history.”