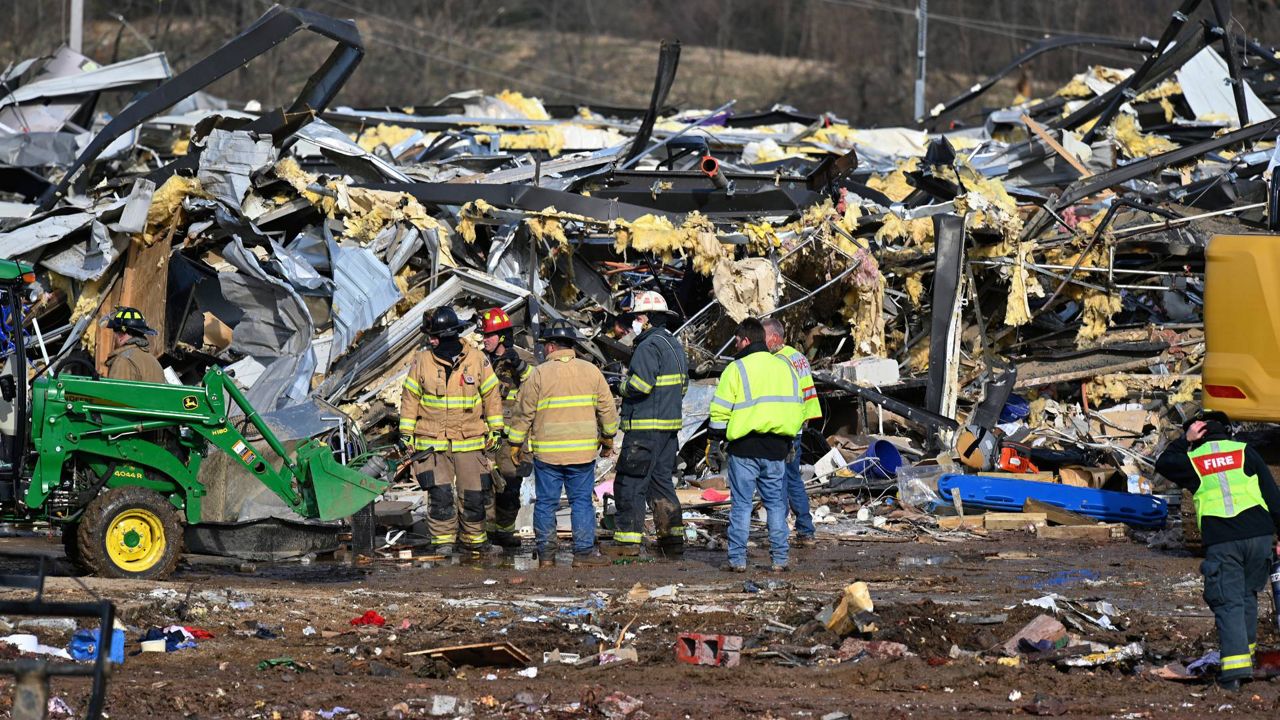 LOUISVILLE, Ky. — Last Friday, Dec. 10, 110 employees were working at Mayfield Consumer Products, the candle factory in Mayfield destroyed by a tornado. A volunteer spokesperson for Mayfield consumer products told Spectrum News 1 on Tuesday that out of the 110 people at the factory Friday night, eight are confirmed dead and the rest have been accounted for.


Kentucky Gov. Andy Beshear said, during his Tuesday briefing on the natural disaster, eight employees were killed, and the state is working to confirm that number, as well as the total accounted for.

Last Saturday, Dec. 11, Kyanna Parsons-Perez celebrated her 40th birthday, by being given the best gift she said she has ever received. Life.

On Friday, Parsons-Perez never could have imagined how she would spend her last day in her 30s.

“When I got out, that was my birthday present. I got out,” Kyanna Parsons-Perez told Spectrum News 1, during a virtual interview.

The single mother of four said she started working at Mayfield Consumer Products, the now destroyed candle factory in Mayfield, Ky., on Nov. 2.

She initially took last Thursday and Friday off because of her birthday, but she said she changed her mind because she wanted to make more money to purchase Christmas gifts for her children.

“So I punched in probably about 5:53, 5:54 [p.m. CST], and when I got there they told us to go straight to the evacuation safety area,” Parsons-Perez said, since the tornado warning system had already gone off.

She said after that warning cleared, workers like herself all returned back to the floor to continue making candles.

Then, the second warning came.

Parsons-Perez said it was back to the T-shaped hallway in the center of the factory, which was the designated emergency safety area during severe weather. She said that was around 9 p.m. CST.

9:27 p.m. 12/10: TORNADO EMERGENCY FOR MAYFIELD. A VIOLENT TORNADO IS MOVING INTO THE CITY OF MAYFIELD. TAKE SHELTER NOW! #KYwx

“It was like the lights went out. It was like, at first they flickered, they went out, and they went out again or something. Like, I just remember my body rocking a little,“ Parsons-Perez explained, while swaying her arms back and forth to show the visual.

Parsons-Perez livestreamed the experience to let people know she and others were in danger. She said it was to keep her calm, her mind off of reality.

When rescue teams showed up, she asked for the water fountain that fell on her leg to be removed because she could no longer feel her leg.

“He said, ‘Ma’am, I am so sorry; there’s about five feet of debris on you,’ and at that moment, it was just like, ‘Yeah, I’m not getting out of here,” she said.

However, she did make it out alive. It was 12:03 a.m. CST on Sat., Dec. 11, when she asked the person who rescued her what time it was. It was also three minutes into her 40th birthday.

“And asked him you, you know, ‘How was we going to deal with the storm?’ That it was supposed to be pretty bad, you know, the following night,” Brien said. “And he just said, 'We would deal with it as it unfolded,' and that’s what we did.”

Brien said the company did have a designated emergency area for employees to gather for severe weather, which is where everyone went. He also said the company did do safety drills. However, since he’d returned to work in July, after being off of work for back surgery, he said there weren’t any drills during the night shift he worked. He said they could have done them, though, during the day shift.

Parsons-Perez, hired by a Paducah-based temp agency, said she there were no drills during her shifts. However, during orientation, all employees were shown where the emergency gathering spot is.

Bob Ferguson, who said he is volunteering as the spokesperson for Mayfield Consumer Products, told Spectrum News 1 that emergency safety drills were performed by the company at least once per year. Ferguson, who is the CEO and a founder of The Hawksbill Group, a global business and communications consulting firm based in Washington, D.C., also said managers and team leaders are trained in what to do in an emergency.

“The protocols that were set from our training exercises and from government guidelines on how to handle such a situation were followed,” he said.

As to why employees were working during a tornado watch, which turned into a tornado warning, Ferguson said this was an unprecedented tornado that no one could have anticipated and employees have a right to leave at any time during a shift.

Confidence is increasing for severe thunderstorms across our region, with the possibility that a few strong tornadoes may occur. Multiple rounds of storms appear likely, with the first round developing a bit sooner between 4-10 PM. Please have multiple ways to receive warnings! pic.twitter.com/TyjalOayLf

“So if an employee felt it was in their best interest to leave, they certainly had that option. Most training is, in bad weather, not to have people go and get in cars or expose themselves to a storm. So most of the training is around sheltering in the safest place that can be found,” Ferguson said.

Ferguson said if Mayfield Consumer Products knew a tornado would rip through the factory, they would have made different decisions.

“And if we’re going to have weather like this going forward because of climate changes, I think everyone will start reevaluating their protocols,” Ferguson said.

With hindsight being 20/20, Brien, who said he’s never worried about going to work during severe weather, wishes all employees were told to leave after the first warning that initially sent employees to the emergency shelter.

“When the alarm went off the second time, yes, that’s when I thought, ‘Man, we should’ve probably sent everybody home,'” Brien said. “You know, ‘Here we go again,’ and the storm is intensified from, you know, 5:30 [p.m. CST] when the other alarm had went off.

“But then it was just too late. We just had to do what we was told to do and showed to do in the past, you know, and you get everybody in a secure area, and that’s what we did.”

It was an incident Brien said he wishes no one had to go through in the first place.

Parsons-Perez didn’t think twice about going to work Friday. The Chicago native said she is used to severe weather.

Reflecting back on Friday, Parsons-Perez said she believed that her immediate supervisor did everything he should have to protect her and her co-workers. However, she wasn’t sure about the decisions made by those above her supervisor.

“Whoever his boss is probably should have said, ‘We probably don’t need to make those candles today. Maybe we should wait.’ But they didn’t,” Parsons-Perez said.

Both Brien and Parsons-Perez are grateful for surviving this horrific experience and both were interviewed within the comfort of their own homes, which were not damaged Friday.

Mayfield Consumer Products has established a hotline for any employees or their loved ones to call for information and available resources the company is providing. The number is 1-888-880-8620.

Mayfield Consumer Products’ CEO Troy Propes posted a statement on the company’s website, which in part stated, “Tragically employees were killed and injured. We’re heartbroken about this, and our immediate efforts are to assist those affected by this terrible disaster.”