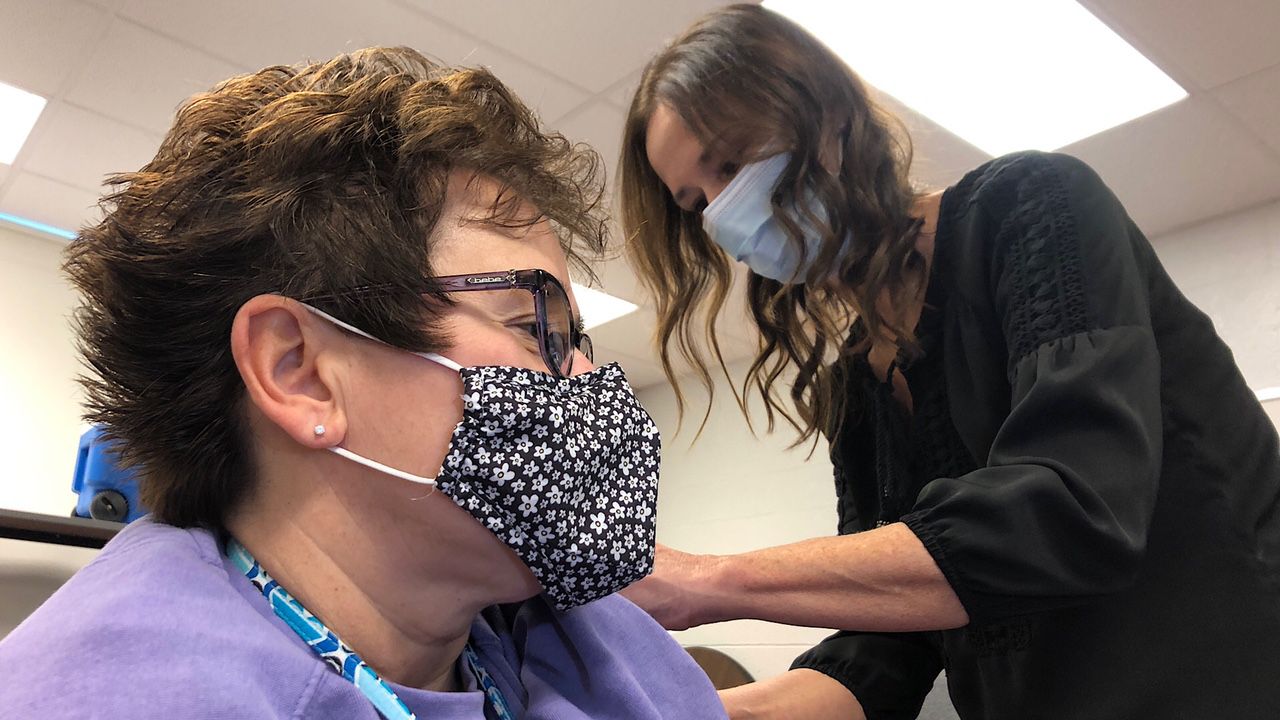 Louisville-based pharmacist, Karen Altsman (right), administers the flu shot to Paula Renfrow, and teacher for students with disabilities at Carter Traditional Elementary school in Louisville, at one of JCPS' annual flu shot clinics for its administration and staff.. (Spectrum News 1/Eileen Street)

Kentuckians roll up their sleeves for flu shot, cases start to peak in December

LOUISVILLE, Ky. — December is just around the corner, full of joy for many because of the holidays, but it’s also the month when flu cases start to peak, which usually lasts until February. However, peak season can also go until the end of flu season, which ends in mid-May.

The annual flu vaccine for this year’s season started being given as early at August in the United States. Two months into this year’s flu season, Kentuckians are still rolling up their sleeves, while health care experts continue to urge more Kentuckians get their flu shot.

Louisville-based pharmacist, Karen Altsman, has given the flu shot for at least a decade.

“It makes it quite a bit busier in the pharmacy when we have flu vaccines and, of course, now that we are doing COVID vaccines, also, it’s even busier,” Altsman told Spectrum News 1.

Altsman said at the locally-owned grocery store where she works, ValuMarket, she usually gives about 100 flu shots per season, which normally runs from late-September until mid-May.

“I think that it’s good especially if you are at high risk and, getting the flu shot, it helps to protect you from getting sick during this time,” Altsman said.

However, this year she is administering a lot more flu shots because it’s her first year also working at Jefferson County Public School's annual flu shot clinics. These clinics aren’t a new concept for the district, but annually JCPS staff and administration have the option to get a free flu shot, with the clinics coming to them. since the clinics come to them with free flu shots for whoever wants it.

At the clinics, Altsman said she vaccinates about 60 people per day.

“Squeezing a flu shot in between children, and taking care of a home, as well as taking care of work, it’s hard to get that done. So this just makes it more convenient for them,” Altsman explained.

Altsman said the local pharmacy she works at seems busier this flu season, but it may not necessarily be because of more Kentuckians getting the flu shot.

“It’s hard to tell this year just because we’re doing the COVID vaccines also, and it’s just constantly people coming in and out, in between COVID vaccines and the flu shots,” she said.

According to data requested by Spectrum News 1 from Kentucky Public Health, the number of Kentuckians who got the flu shot significantly increased last year during the 2020-2021 flu season. Last year’s season was the first flu season that ran its full course during the pandemic. 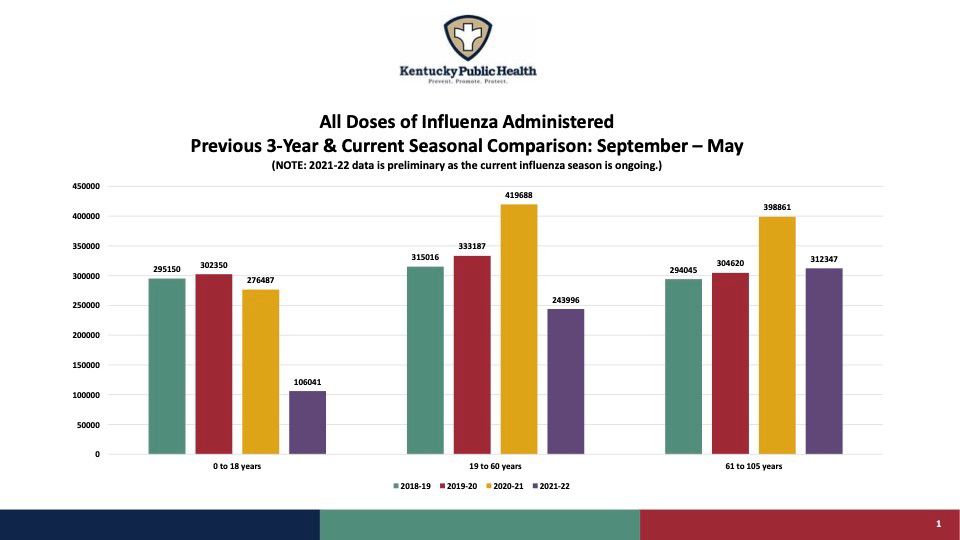 While this year, represented by the purple bar spread over the three separate age groups represented, reflects how many Kentuckians have received the flu shot up to about mid-November this flu season.

The bar graph also shows that more Kentuckians, aged 61 and up, have gotten the flu shot about 1.5 months into flu season this year compared to how many Kentuckians got the flu shot during the entire flu seasons that started in 2018 and 2019.

Last year, Kentucky Public Health data shows just over 24% of Kentuckians received the flu shot during the entire flu season, which lasts about 7.5 months each year.

While this year, the data shows about 1.5 months into flu season, just under 15% of Kentuckians have opted to get their flu shot.

For comparison, 59% of Kentuckians have received at least one dose of a COVID-19 vaccine.

Nurse practitioner Amy Doolittle-Crider, who works at Norton Prompt Care Clinics located in Walgreens around Kentuckiana, thinks getting the flu shot this year is more important than ever. The reason being that since we are still in a pandemic, and people are also gathering in larger groups because of COVID-19 vaccines.

“Yeah, I definitely see more people coming in, not sure why. It’s definitely a good thing because we don’t want these germs spreading. The flu can be very serious and lead to very serious hospitalizations, even including death. So we need to get people vaccinated,” Crider told Spectrum News 1.

Spectrum News 1 asked Crider if she thinks more people are becoming comfortable with needles and getting a vaccine, given many Kentuckians have had at least one COVID-19 vaccine, two of the three vaccines on the market require two shots to reach peak effectiveness, and the booster shot means many people are now on their third COVID-19 vaccine shot this year.

“I think there is a comfort in it, and they can see what damage these viruses can do to people, and the ramifications it can have on their health. So I think they are more willing at this time to get that to help protect themselves but also their family members,” Crider said.

The CDC recommends that everyone 6 months and older should get a flu shot every year, with some rare exceptions.

The CDC also states you can get the COVID-19 vaccine, including the booster shot, and the flu shot at the same time.

However, if you have concerns about getting both vaccines at the same time, the CDC says speak with a health care provider.