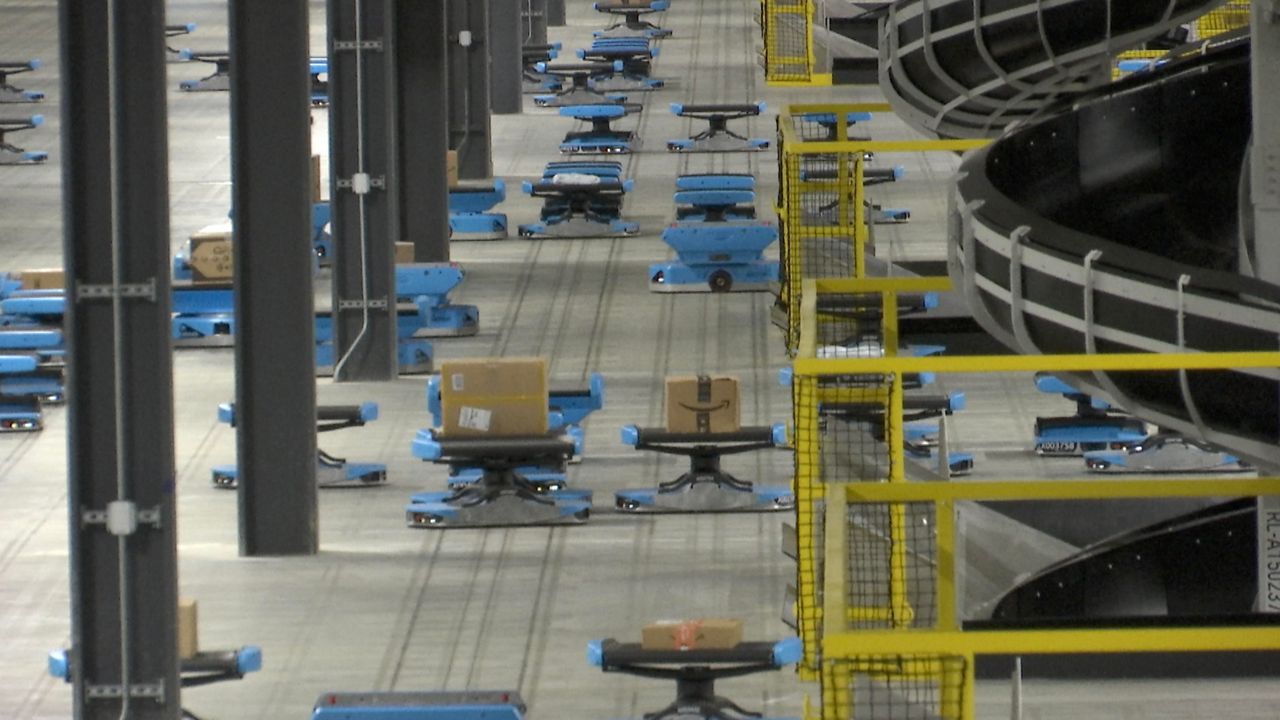 HEBRON, Ky. — With the holidays fast approaching, many people are trying to get their holiday shopping done as early as possible.

Supply chain concerns mean finding that special item on store shelves might be more difficult, making online shopping even more prevalent than it already is.


The Amazon Air Hub at the Cincinnati/Northern Kentucky International Airport (CVG) is ramping up to make sure packages get to their destinations on time this holiday season.

While Santa’s workshop has always been described as being at the North Pole, one could argue it’s actually in the Air Hub, with Director of Operations Adrian Melendez playing the part of Santa, and all of the facility’s robots are the elves, working around the clock to make sure Christmas gifts get to where they’re going.

But Melendez said it’s more of a support role.

“Santa's got a really tough job. He’s got to go all the way around the world. And he needs a lot of help to make that happen. And we’ve got hundreds of thousands of good little boys and girls across the country that need the packages," Melendez said. "And we are basically the alley-oop to help Santa get his packages delivered on time. So they can be under the Christmas tree on Christmas morning to set off a really great holiday."

It’s quite the journey a package must take, from the facility to under a tree. The little robots take packages to their designated chutes, where they slide down to be packed into containers that will eventually be packed into planes. Big robotic arms sort out some of the larger packages.

All of this technology makes it easier and safer for the human workers to do their jobs. That’s important, because it’s the busiest time of the year for Amazon.

“We know that customers are wanting to shop earlier than ever this year, and we’ve put a lot of work into how we forecast, what customers want, and when they want it. And we’ve built that into how we’ve ramped, not only our building here at CVG Airport, but across our transpiration network, so that we’re ready for this demand,” Melendez said.

The holidays are essentially the Super Bowl for places like Amazon, Melendez added.

“We’ve been prepping all year to get to where we are today. And we’re really excited to deliver some really fast shipping for customers to meet their demand right before the holiday season," Melendez said.

Those big shipping containers eventually make their way onto the Prime Airplanes, and on their way to eager customers. It’s not quite reindeer pulling Santa's sleigh, but not far off, either.

“We’re ready for that demand now, and we’re ready to continue supporting that all the way up until the last Christmas shipment that goes out the door,” Melendez said.