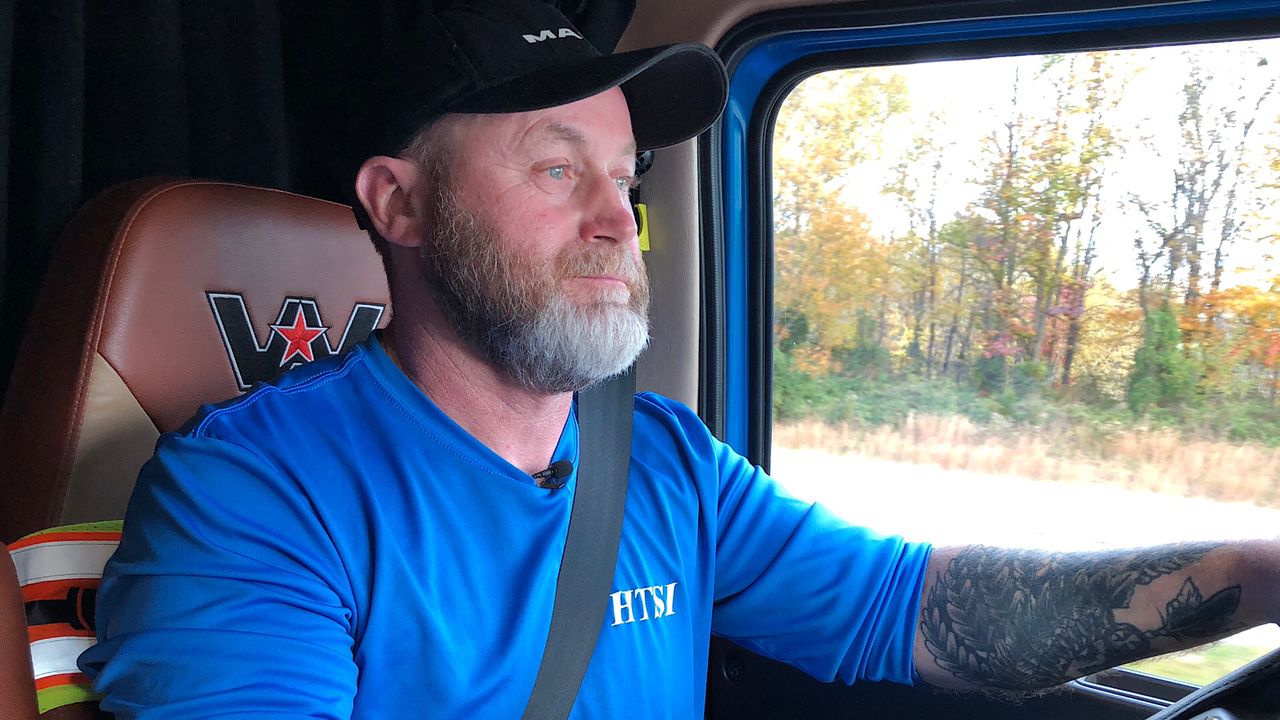 Brian McManus, a truck driver for Hill Transportation Services, Inc., drives to the company's mechanic shop to check his truck before heading out on a new route. (Spectrum News 1/Eileen Street)

LOUISVILLE, Ky. — There are many links that makeup the supply-chain to make sure the goods we buy get to us, whether shopping online or at brick-and-mortar businesses. Before the pandemic, the trucking industry was already facing a truck driver shortage. Now, that issue is exacerbated, and other problems have surfaced due to the global supply-chain disruption.

Brian McManus started driving semi-trucks when he was 18 years old, and he got his commercial driver's license (CDL) at 21 years old.

“It’s a job you have to be passionate about. If you are not passionate about it, you’ll never last,” Brian McManus, a truck driver at Hill Transportation Services, Inc. (HTSI) based in Louisville, told Spectrum News 1.

And many truck drivers don’t last, which is partly why there is a truck driver shortage. McManus said he started to see a change in the number of truckers in the late ’90s. However, the 49-year-old said the issue has really grown; plus, some more issues have been added.

“You get to the shipper, you get loaded, you’d get out. [That took] an hour, an hour-and-a-half. Tops. I went to Ohio last night, and I sat in Ohio for almost five hours before I got loaded,” he said.

McManus started working for HTSI in March 2021 because they pay a salary. The prior company he was with for a decade, McManus said, had a different pay structure.

“I was paid by the mile; so if I am sitting still, I am not making money,” McManus said.

The American Trucking Association (ATA) estimates that the U.S. truck driver shortage will hit a historic high this year. Just over 80,000 drivers are needed to fill the gap, compared to under 60,000 drivers needed in 2020.

ATA said in a news release that there isn’t a single cause for the driver shortage, but some reasons include high retirement rates, the lifestyle, with drivers being away from home for days to weeks on end, and the low percentage of female drivers in the industry, among other reasons.

However, the pandemic made things worse. Some drivers left the industry altogether. Plus, 2020 churned out less potential hires since truck driver training schools were closed.

In addition, supply-chain issues have exacerbated the already high turnover rate in the industry.

“Really with the pandemic and everybody being short on drivers, yes, you had a lot of companies talking back-and-forth, offering different things, trying to attract drivers away from each other,” HTSI’s President Jon-Paul Groves said.

“Obviously, it’s a negative for some of our customers because we have had to raise the rates, but for us right now, we are seeming to get a bit better quality driver, and it’s kind of helped our fleet,” Groves explained.

“It is not an easy job,” McManus said about truck driving. However, it’s the perfect job for him.

“This is what trucking is all of about, seeing this country, and meeting different people. This is why my heart is in this job. I love it,” McManus said.

Regarding solutions to these issues, Groves said recruiting younger people and hiring more women would help. He also said future technology, with autonomous driving trucks, will also alleviate the truck driver shortage. To address the lifestyle, which is one of the main reasons there is high driver turnover in the industry, HTSI is looking at reducing weekly hours and offering more time at home for its drivers.

McManus told Spectrum News 1 that some ideas he has to decrease high turnover rates include companies paying drivers more, providing nice trucks since drivers sleep in them, and making sure drivers are well-trained before hitting the open road.