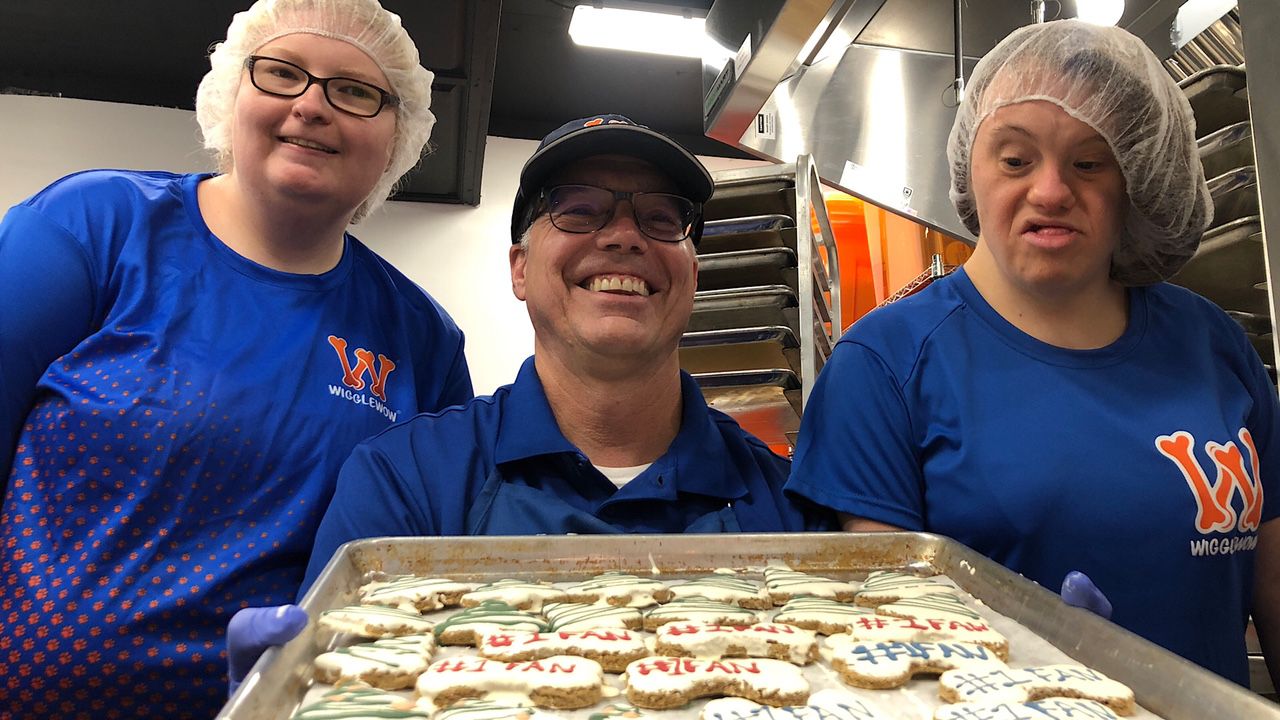 Hiring people with disabilities, an untapped market to help the U.S. labor shortage

JEFFERSONTOWN, Ky. — As some businesses struggle to hire employees, Wigglewow, a specialty dog treat company, has a waiting list of people wanting to work. The Jeffersontown-based company focuses on hiring people with disabilities, which its founder Mark Pfeifer said is an untapped labor market.

In 2019, Pfeifer left his corporate job to focus on Wigglewow; a company he founded that was inspired by his nephew who has autism.

Wigglewow’s purpose goes beyond just creating treats canines love and humans can stomach. Pfeifer said, “I mean, I don’t want my dogs eating anything I wouldn’t be willing to eat.”

Wigglewow also exists to create jobs for people like Emily Parks, who works in the kitchen as an “Epic Chef.”

The 20-year-old, who has Prader-Willi syndrome, told Spectrum News 1 her dog, Sassy, gets very excited and jumps around anytime she sees a Wigglewow dog treat. Parks also said she has tasted Wigglewow treats, too.

“They taste like a dry granola bar … but salty, though,” Parks told Spectrum News 1.

Pfeifer also recently hired Sarah Potter to work in the kitchen, or as Pfeifer calls it “The Doghouse.” Potter is nonverbal and has Down syndrome, but there is always work to accommodate every epic chef’s abilities.

“God has me on a mission. I mean this is a society where we as a culture just kind of push them to the side and don’t really give them the opportunities,” Pfeifer said. “We are all children, right, and we are all his children, and we all have different skills and abilities, and so I see it as my responsibility to try to help bring out, through Wigglewow, whatever they are capable of doing.”

The 56-year-old said he is often asked by business-owner friends about why he hires people with disabilities.

“So I just asked them a couple questions. I said, ‘Do you have any young employees?’ They said, ‘Well, absolutely.’ I go, “And they always show up on time and every day for work right?’ And they kind of laughed and shrug off and like, ‘Yeah right, you know the younger generation they aren’t like that. They don’t have the same work ethic,’ “ Pfeifer explained.

He continued, “And I go, ‘I never have that problem. My employees always show up.’ “

Wigglewow also doesn’t have any issues hiring, despite the current labor shortage in the U.S. Currently, there is a waiting list to work in Wigglewow’s kitchen.

“I mean the fact that we have just under 50 people on our waiting list right now, and many more that didn’t even want to get on the waiting list, there are so many other companies that need to hire this population and give them an opportunity,” Pfeifer said.

David Wilf, founder of xStellar, a Washington D.C. area staffing firm, which specializes in job placement for people with disabilities, said this job market is very loyal, accurate, and reliable.

You’re talking about individuals who are self-motivated because they’ve had to be. That’s the only way they are successful. They are extremely honest to a fault,” Wilf explained. “You are not going to have individuals that are gonna come in and be on their cellphones and playing games and trying to chat it up. They’re going to be heads down, working, doing their job and take a lot of pride in what they do.”

Pre-pandemic, Wilf told Spectrum News 1 that xStellar was in seven states, and now, the company helps potential employees and employers in 23 states.

“We have companies that absolutely are telling us that they are 40 people shy, 60 people shy. They are working with four, five, or six different staffing agencies that are providing maybe one person a month, and that person lasts a week,” Wilf told Spectrum News 1. “They contact us; we are able to provide them with 40 resources within two weeks.”

Wilf, who said he was partly inspired to start xStellar because of relatives he has with disabilities, said his staffing firm has received interest from over 900 Kentuckians with disabilities who want to work.

Based on data from 2019 by the Institute on Disability/UCED at the University of New Hampshire, the employment rate for Kentuckians with disabilities aged 18 to 64 years old and living in the community, not in an institution, was 30.8%. While the employment rate for people without disabilities, aged 18 to 64 years old, and also living in the community, was just 76.2%.

Wilf said xStellar offers free support for job seekers prior to and after being hired. Plus, the staffing firm also provides on-site support for both the company and employee once matched because Wilf explained that the first three to six months can be the most challenging for both the employer and employee.

Wilf said a big percentage of job placements by xStellar, for people with disabilities, are in production, but other opportunities are also on the table.

“We are also talking IT, software testing, software engineering,” Wilf explained. “There’s an individual right now who is a vice president at a major financial institution, and nobody would ever guess that individual has autism.”

Wigglewow has no connection to xStellar and Pfeifer hires the employees. Customers get to know a bite-sized piece of a Wigglewow employee's life when they buy Wigglewow treats because a special label is placed on each package, which has information, such as the hobbies, on the employee who packaged that bag.

“People always think, “Oh you know, you’re such a blessing to so many other people.’ That’s not it at all. I get so many blessings just seeing these individuals progress and learn new skills that even their parents didn’t think they were capable of doing. And that just makes it all worthwhile,” Pfeifer said.

Wigglewow pays its epic chefs above minimum wage. They start at $8.50 per hour. Even though there’s a waiting list to work in the kitchen, Wigglewow is always looking for people to make local deliveries, and a driver's license isn’t required. To apply for a job at Wigglewow, call 502-558-5100 or email mpfeifer@wigglewow.com. You can also order Wigglewow treats on its website.

If you are an employer interested in working with xStellar to hire a person with disabilities, or you would like to work with xStellar to find a job through its free services for potential hires, call 800-811-6818 or email info@xStellarCorp.com. You can also visit xStellar’s website for more information.