President Joe Biden kicked off on a public tour to sell his recently passed $1.2 trillion bipartisan infrastructure bill — a major goal his two predecessors tried and failed to accomplish — with a visit to Baltimore on Wednesday.

Speaking at the Port of Baltimore, Biden discussed what his infrastructure bill will do to improve ports, as well as the actions his administration has already taken "to get our supply chains moving to lower prices, speed up deliveries and address shortages."

The president has criticized the press for not adequately explaining supply chains to the American public, and he offered his own description on Wednesday, saying: "In simple terms, supply chain is just the journey the product takes to get your doorstep. Raw materials plus labor, assembly, shipping —  everything it takes to create the finished product."

Supply chains for many basic materials were impacted at the outset of the coronvirus pandemic, when manufacturing centers closed down both in the United States and abroad. Some countries, like Malaysia, have experienced more recent spikes in COVID-19 cases, leading to a renewed shutdown of a critical component of the world's semiconductor supply chain.

"Never again should our country be left unable to produce critical goods because we don't have access to materials," Biden said from the Port of Baltimore. "Never again should we have to rely on one company or one country, particularly when that country doesn't share our values."

The recently-passed infrastructure bill marks the "biggest investment in ports in American history," the president said, a move the administration hopes will ease supply chain issues as holiday shopping ticks up.

The speech came one day after the Biden administration announced a bevy of actions to fund ports and address supply chain issues ahead of the implementation of the infrastructure bill, which will devote an “unprecedented” $17 billion to improve port infrastructure — the single largest federal investment in U.S. ports in the nation’s history, per the White House.

Senior administration officials said Tuesday that the Transportation Department would allow port authorities to redirect any leftover money from grant projects to address the supply chain issues. For example, the Georgia Ports Authority will use $8 million to convert its inland facilities for the port of Savannah into container yards, freeing up dock space and speeding the flow of goods to their final destinations.

John Picari, Biden’s port envoy on the Supply Chain Disruptions Task Force, has already begun working with “the operators and shippers, shipping companies, unions and retailers to speed Congress so they get products to stores, into your doors and to get the shelves fully stocked this holiday season,” Biden added Wednesday.

Biden also touted a string of recent victories in terms of the country’s economic growth and recovery, including six straight weeks of falling unemployment claims, a strong October jobs report, 5.6 million new jobs created and the fastest decrease in unemployment at this point in the year since the 1950s.

"Jobs are up, wages are up, values' up and savings are up," Biden said, later acknowledging:"We got problems too. Many people remain unsettled about the economy and we all know why. They see higher prices when they go the to store or go online and they ... can't find what they always want."

It's true that the economic recovery has not been without challenges — specifically regarding concerns over rising inflation, coupled with shipping backlogs and supply chain issues that have plagued perceptions of the administration’s handling of the economy.

Following the release of a report from the Department of Labor Wednesday which said that prices soared 6.2% over the last year, the president said that reversing the growing trend of inflation "is a top priority for me," noting that it hurts Americans in their pocketbooks."

"The largest share of the increase in prices in this report is due to rising energy costs — and in the few days since the data for this report were collected, the price of natural gas has fallen," Biden noted. "I have directed my National Economic Council to pursue means to try to further reduce these costs, and have asked the Federal Trade Commission to strike back at any market manipulation or price gouging in this sector."

Biden said that "price increases reflect the ongoing struggle to restore smooth operations in the economy in the restart" and touted his recently passed $1.2 trillion bipartisan infrastructure bill as a way to reduce supply chain bottlenecks, lower costs and make products more available and less costly.

He also urged Congress to pass his $1.7 trillion Build Back Better bill, "which is fully paid for and does not add to the debt, and will get more Americans working by reducing the cost of child care and elder care, and help directly lower costs for American families by providing more affordable health coverage and prescription drugs —alongside cutting taxes for 50 million Americans including for most families with children."

Biden spoke with the CEOs of Walmart, Target, FedEx and UPS on Tuesday to discuss actions the administration and private sector can take to strengthen supply chains and address these issues.

During the conversation, per the White House, Biden got updates from the executives on the actions they are taking to ramp up production “in our entire goods movement supply chain and discussed how shelves will be well-stocked this holiday season,” thanks to those companies and their employees, “as well as the ports and workers stretching from longshoremen to truck drivers, rail and warehouse workers, store clerks, and everyone in between.”

The CEOs assured Biden their "shelves will be stocked in stores this holiday," Biden added on Wednesday.

The administration already brokered arrangements with the ports of Los Angeles and Long Beach to move to 24/7 operations, and arranged partnerships with a number of companies — including Walmart, Target, FedEx and UPS — who are also taking action to increase output. 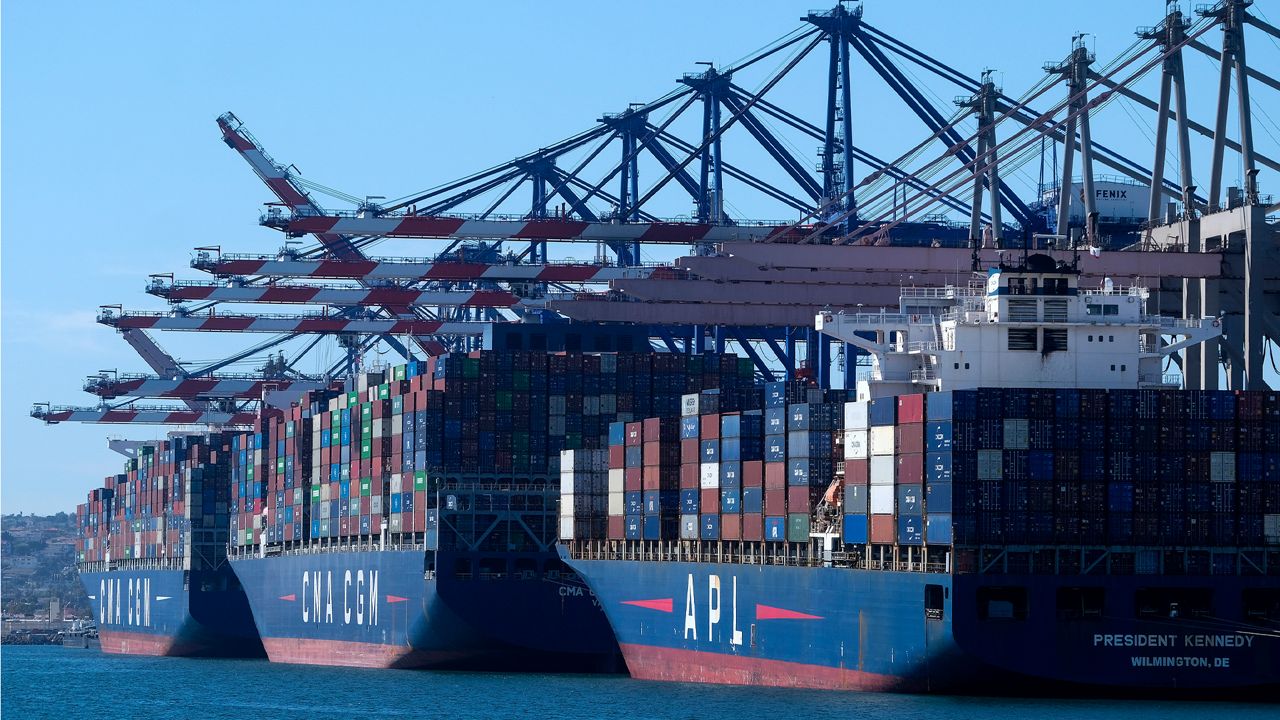 While the Port of Baltimore has not experienced some of the same backlogs as other highly trafficked U.S. ports, the administration says it highlights a strong public-private partnership that is needed to get the economy on track.

"It's an example of the kind of investments that are needed from both the private and public sector side," a senior administration official told reporters. "It's also an illustration that the co-funding in the bipartisan infrastructure plan incentivizes the private sector to make these kinds of long-term investments as well."

The administration says that the port, which has turned into a burgeoning hub for retailers and has added more container ships due to congestion at other ports, will benefit from the infrastructure bill thanks to an investment in renevations to the Howard Street Tunnel, a major artery servicing the port. The tunnel will be expanded and renovated, allowing for double-stacked shipping containers which will faciliate easier transportation of goods.

Obama said in a 2012 interview that his biggest mistake was not selling the benefits of the 2009 stimulus bill, which helped pull the U.S. economy back from the brink after the 2007-08 financial crash.

"The mistake of my first term," Obama told CBS News, "was thinking that this job was just about getting the policy right, and that’s important."

“But the nature of this office is also to tell a story to the American people that gives them a sense of unity and purpose and optimism, especially during tough times," he continued.

“It’s funny — when I ran, everybody said, well, he can give a good speech but can he actually manage the job?” he added. “And in my first two years, I think the notion was, ‘Well, he’s been juggling and managing a lot of stuff, but where’s the story that tells us where he’s going?’ And I think that was a legitimate criticism.”

The goal for Biden, amid sliding poll numbers (largely from prior of the bill's passage), is to sell the bill to an American public, and a Democratic base, weary for action — especially in the aftermath of surprising Republican gains in last week's off-year elections.

Biden begins his tour to tout the in Baltimore, a city that former President Donald Trump, his predecessor, called "the WORST IN NATION" and a “disgusting, rat and rodent infested mess" that is "considered the worst run and most dangerous anywhere in the United States."

But Biden will instead show the majority Black city what his dual economic proposals – the infrastructure bill and the Build Back Better bill – can do for Americans, including the Child Care Tax Credit, which is projected to cut child poverty dramatically, universal pre-K, cutting prescription drug costs and other measures for child care and health care.

And one major part of his pitch? That Biden, not Trump, took infrastructure over the finish line.

"How long have you heard people in Washington talk about passing an infrastructure bill?" Biden told a group at a virtual Democratic National Committee fundraiser Tuesday night. "A long time. But we got it done."

At the event, Biden spoke highly of the bill's investments, including "the most significant investment in passenger rail in the past 50 years, roads and bridges in the past 70 years, public transit ever," as well as landmark investments in broadband access, clean drinking water and other provisions.

"For four years long, the last President told us we're going to get the infrastructure done, but he couldn't get it done," Biden added. "So it was left to us, and we got the job done."