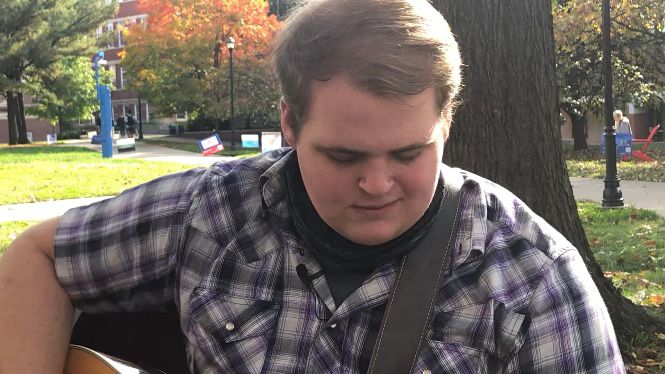 Josh Rister is a UK student using his musical talents to raise awareness about the dangers of drug abuse in his home county. (Spectrum News 1/ Crystal Sicard)

LEXINGTON,  Ky. — He grew up losing family members and friends to addiction and now he’s using music to represent the opioid epidemic problem in Eastern Kentucky.

Josh Rister taught himself to play guitar four years ago and started writing his own songs last year. Born and raised in Lewis County, Rister says his home is known for many things, like beautiful mountains and peaceful areas, but unfortunately it also has some bad reputations as well.

“I learned that I really liked to write about things that I could feel emotionally about, like things like addiction and the disparities in communities in the Appalachian region, and I've just kind of been rolling with that ever since,” Rister said.

Rister says writing music started off as a joke and then he realized by using his lyrics, he could make a difference.

“Blood, meth and tears. The title track is just kind of...It's a really visceral and raw song. It's gritty. And it just talks about the effects of the opioid epidemic has had on Appalachia and eastern Kentucky, specifically because  I've had family members and friends die and lose everything just because of the opioid epidemic and that's something that really hits home, not only to me, but to many people in the region,” Rister said.

Rister says he writes each song from his heart, and hopes that encourages listeners who may be going through difficult situations to feel connected to one another.

“A lot of music that’s  really emotionally invested. I loved Johnny Cash when I was younger, and he always sang songs, you know whether he had experienced or not he really believed what he was singing. And I think that's really the characteristic I try to give off in my music is that, you know, I feel everything that I say I try not to write a song that I'm bored with or that I don't think means anything because to me that just kind of devalues it,” Rister said.

Over the last year Rister has written and produced over ten different songs about Kentucky hardships, in hopes to shine a light on addiction and helping people through recovery.

Josh plans to give half of his profits from his first album to a recovery center in Greenup County.