LOUISVILLE, Ky. — From waiting tables to helping save lives, Kristen Wieder made full 180 when it came to her career path.

After working 12 years at Lynn’s Paradise Cafe, a majority of that time as a manager, Wieder decided it was time for a change.

“Working at Lynn's required a lot of energy,” she said. "I liked to work the busy shifts and a lot of organization and that kind of thing and I thought maybe there's something really meaningful I can channel this energy into.”

That life-changing moment was when Wieder met a couple whose son had Leukemia.

“He was a little pistol, little fireplug, he was full of life and energy especially for a kid who was sick,” Wieder said. “Beyond kind of changing the trajectory of my career, he changed the way that I kind of view life and challenges.”

After the boy eventually lost his battle to cancer, his parents continued to still meet his oncology nurses for lunch at Lynn’s.

“I think just seeing the impact those nurses had on this family, the lasting impact really just made me think about what I was doing and what I wanted to invest my energy in,” Wieder said.

That’s what sparked Wieder to switch her profession. At the age of 30 with three children, Wieder enrolled in nursing school. 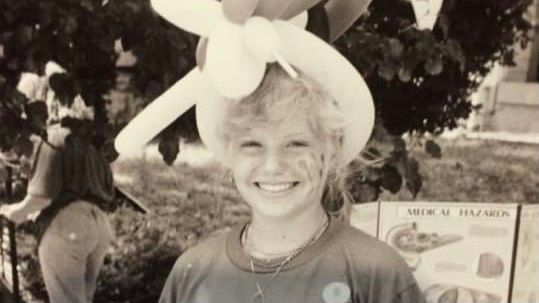 Kristen Wieder. Kristen as a child posing for a picture at Norton Audubon Hopsital where her mother worked as an OR nurse. (Kristen Wieder)

“I've always loved taking care of people and this just kind of felt like taking it to its highest form,” Wieder said.

The hospital is almost a second home to Wieder after her mother previously served as an OR nurse.

“I think if I had gone into nursing, following in my mothers footsteps when I was 22 years old, I don't think I would have landed where I am,” Wieder said. “I think I need to go into it at the right time.”

Wieder still thinks back to the family at Lynn's Paradise that helped her get to where she is today.

“I've always tried to keep that in the back of my mind when I'm facing a challenge whether at work or personally, if that kid can handle it with a smile on his face than any of us can,” Wieder said.

In honor of the boy who changed Kristen Wieder’s life, her daughter’s middle name is in memory of him.