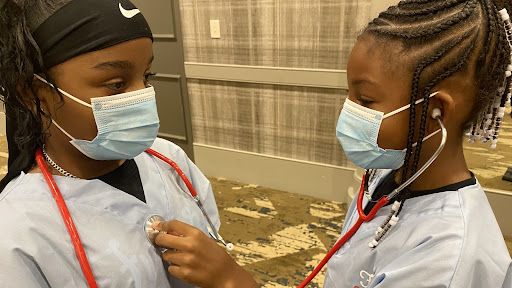 Each ambassador received their set of scrubs and a stethoscope. (Spectrum News 1/Ashley N. Brown)

LOUISVILLE Ky. — Youth ambassadors for the Christopher 2X Game Changer’s Future Healers program got some special swag and gear to wear for picture day this weekend.

The two dozen ambassadors received their own set of scrubs and medical equipment.

“When I grow up I want to be a doctor, but I never wore scrubs before,” said 7-year-old Future Healers ambassador Anthony Scruggs.

After posing for the camera, the students got to participate in games and activities led by University of Louisville medical students.

“They hear so much on the news about people getting rushed to UofL Hospital and everything like that, so our goal was to change that narrative through kids,” said Game Changers executive director Christopher 2x.

The picture day event was one way the program is working to inspire and heal children impacted by violence.

“We want to make sure that have a choice to at least drown out some of the negativity and start to embrace some hope in their hearts about okay I heard about this person getting hurt. I’m learning about how I can help people,” 2X said.

The Future Healers ambassadors learn about anatomy and how they can be part of the medical science community.

Jaidyn Fels, a 9-year-old ambassador, joined the program so he can be part of healing in the community.

“I’m here because my dad died from a homicide and I’m trying to help everybody else,” Fel said.

“It was devastating because he was so close to his father, they done things together, he's got sisters and brothers, they would come over my house they run, jump and play. He misses that. He misses his dad,” Carl said.

Jaidyn said putting on his scrub was motivation to reach his goal of becoming a doctor to help others going through the pain his family is experiencing.

He wears a face mask with pictures of himself with his father and siblings.

“Sometime I’ll take it off and I’ll look at him and remember him smiling and laughing,” Jaidyn said.

The next program event is the Future Healers at the Zoo event that'll be held on September 25 at Louisville Zoo.