LOUISVILLE, Ky. — Some people stuff their used plastic grocery store bags in a drawer. Others store them under a cabinet.

Joy Lait repurposes thousands of bags each month to help the homeless. She started doing so after a drive downtown.

“I felt guilty because there were a lot of people that didn't have homes, and I thought to myself how miserable, how absolutely horrible that concrete is cold, and it's hard,” Lait said.

She decided she’d wanted to do something beyond making monetary donation to homeless outreach program. She wanted to make something the homeless population could use, but first she had to learn how to.

Lait’s mother crocheted until she died at age 101, but she never inherit her mother’s skills. Luckily, she found her skills on the web.

“So I went to YouTube, the best resource and watched a bunch of videos,” Lait said. 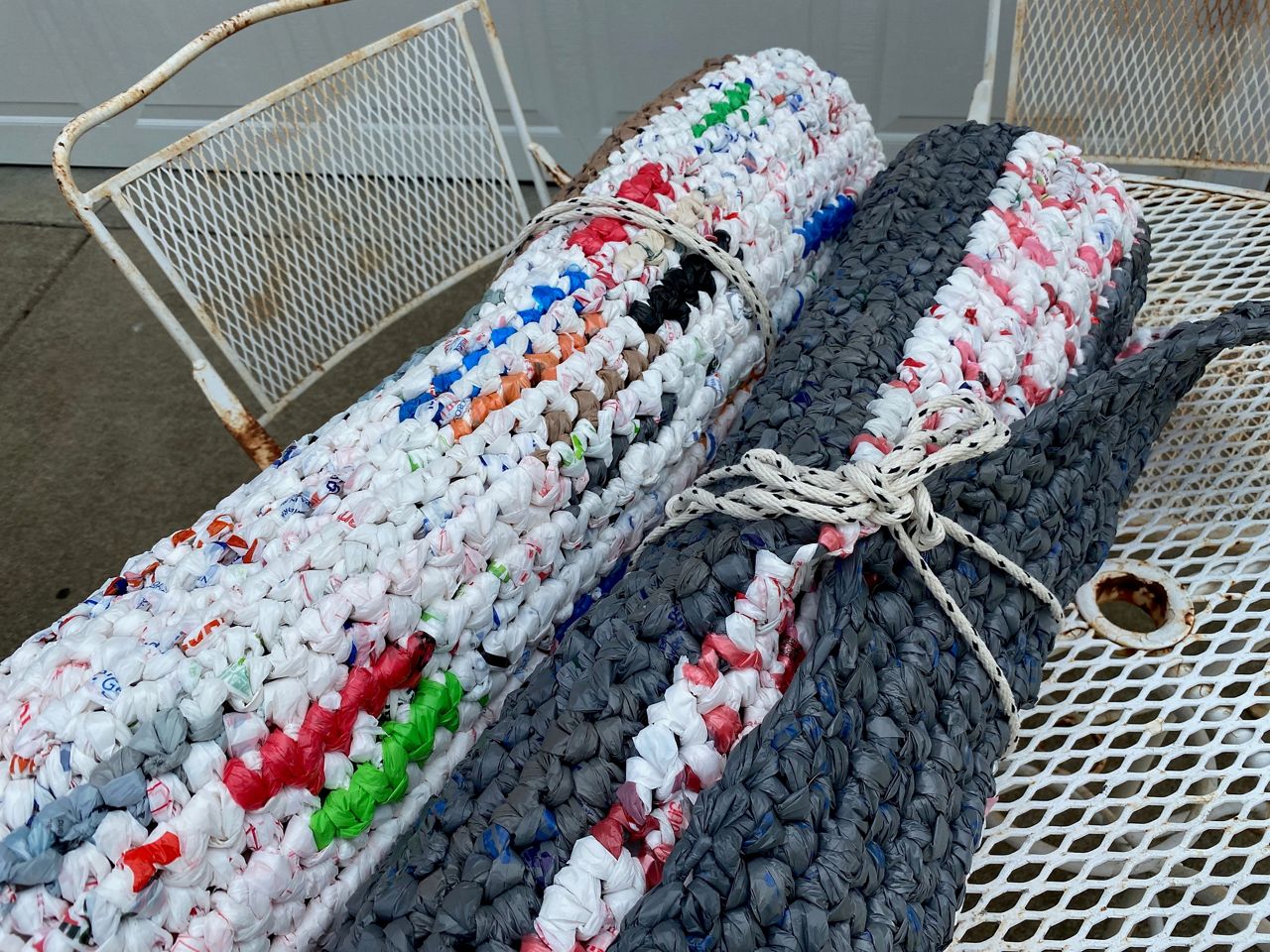 Each of Lait's mats has a unique design. (Spectrum News 1/Ashley N. Brown)

After a night of YouTube training, she was transforming plastic bags into sleeping mats for the homeless. She hasn’t put the crochet needle down since she’s gotten the hang of it.

“I've been doing it ever since, and I don't know that I'll stop until they don't need them anymore because it does it gives me something to do in the evening,” says Lait.

Her dining room is covered in bags inside of bags stuffed into even bigger bags. At one point, she ran out of bags, but her neighbors overwhelmingly came to rescue.

Her sisters and a local artist often help with sorting and cutting of bags, which is a process that takes hours before Lait can start stitching.

The mats are donated to The Forgotten Louisville, a homeless outreach program.

“When it rains it allows the moisture to soak up in the mats and their sleeping bags don’t get wet so we don’t have to replace everything. It also gives them the comfort of home so that they are not directly on the ground,” Adkins said.

“They don't attract bedbugs. It's not like carrying around a sleeping bag because they're very light, and they can use them to sit on or lay, and they're wide enough for guy in his puppy I'm told,” Lait said.

The mats are claimed within seconds of their arrival at camps, but Adkins said some recently made have already been assigned to someone.

“The ones that Joy made for us this week will go to a young pregnant lady and that will help make it easier on her getting up and down,” she said.

The mats give the bags a second life. The Center for Biological Diversity reported 730,000 tons of plastic items were generated in 2015 in the United States, but less than 13% of them were recycled.

“At least this way somebody's using them because there are thousands of them. I hate to see them go in landfills because how many hundreds of years does it take to sit and degrade,” Lait said.

It takes 1,000 years according to the Center for Biological Diversity but with a few hours each day, Lait is able to transform about 1,400 bags into two sleeping mats every month.

“What I do is very small part of what people can do very reasonably,” Lait said. “It cost you nothing, just time and we've got the time."