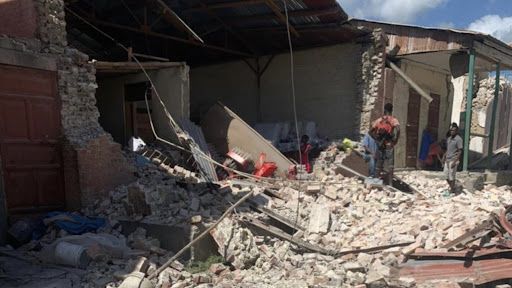 Many buildings and churches in Jeremie were destroyed by the earthquake. (Gary Boice)

Gary Boice and his son, from of New Albany, Indiana, were on the fifth floor of a building in the city of Jeremie when it struck.


“I couldn't believe how much of it was shaking, and I kept thinking, the concrete is going to crack, because we were moving back and forth and really violent,” Boice said.

Though 35 miles from the epicenter, Boice described those 30 seconds as the worst earthquake he’s ever experienced.

“We've had churches collapse here, we've had hotel rock walls and a lot of people that have been killed here, not like Les Cayes,” Boice said.

Boice’s son planned a trip and would have been in the middle of Les Cayes, one of the hardest hit areas had he not decided to cancel after assessing the dangers of gangs on the route there.

Boice spends weeks at a time in Haiti serving with Tek4Kids, which provides 2,000 Haitian kids access to technology.

The earthquake was a repeat of a tragedy he’s already witnessed in the past.

“We went to the earthquake, about 10 years ago, from Port-au-Prince that killed hundreds of thousands of people, and so every one of them, they're traumatized, just the fact that the ground shakes, they can't stand. They want to get out,” Boice said.

Patients are now being treated outside of already-full hospitals, and the bridge near Les Cayes commonly used to get fuel and water into the area has collapsed, Boice said.

Combining that with the recent assassination of Haiti's president, and Boice said the country is facing significant turmoil.

“They’re unsure of the future, you know, the hope is all the political stuff going on and then, now there will be shortage of the food and water probably here," Boice said. "You see the suffering and the see families can't afford, they can't feed your kids and they don't have good water and a lot of sickness and illness."

He's prepared to shift the focus of his mission to assist like he has in the past.

"[After] Hurricane Matthew, about four years ago, we were the first people on the ground, passing out water because in each of our schools we put in batteries and inverters and we have a cistern. We had a water purification system so we started cranking out 1000s of gallons of water a day,” Boice said.

Boice remains in good spirits he can even knowing a tropical storm is headed their way.

“I feel like we're helping people and we're trying to figure out how to help people more so every time there's a crisis, there's an opportunity to do some good things,” Boice said.

Boice said he will spend the next several days assessing the need for a water purification program.