SILVERTON, Ohio — Just Brew Coffee House serves an assortment of hot beverages and pastries, but the most important thing it offers isn't found on its menu.


Fourteen of Just Brew's 16 employees have some form of disability. Their diagnoses range from various forms of autism to Down syndrome to Williams syndrome, a gene condition that affects about one in every 10,000 people.

“We are trying to teach transferable job skills,” said Jennifer Tilford, the shop’s manager. "Staff can come in — it might be their first job, it might be building off things they’ve learned at other jobs, or it might be re-employment after COVID-19. Some of our employees had lost positions at other jobs when COVID happened. So now, this is giving them a chance to get reintroduced into the job market.” 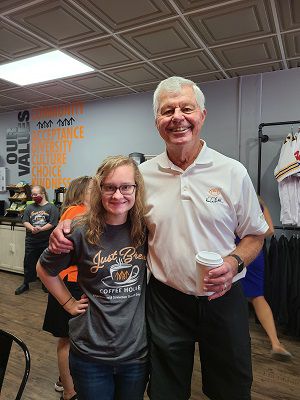 Just Brew is an initiative from the Ken Anderson Alliance (KAA), which provides support services and social engagements to Cincinnati adults with developmental disabilities. The cafe occupies a large storefront at KAA's headquarters on Plainfield Road.

“We’re always looking for work opportunities for those we serve. So, when we got our new office, we came up with the idea for a coffee shop,” said Ken Anderson, the agency’s founder. “It’s really a point of pride to see the place come to life."

Anderson is best known for his prowess on the football field in the 1970s and '80s. But the former Cincinnati Bengals quarterback has dedicated the second half of his professional career to serving others.

He and his wife, Cristy, started the Ken Anderson Foundation to show support for their nephew Drew who has what they refer to as a severe form of autism. The goal was to provide resources that will allow Drew, and others with autism, to "live life to the fullest," Anderson said.

In 2017, the organization merged with Lighthouse Landing and became KAA. At that time, they expanded their mission to include the broader developmental disabilities community.

Just Brew officially opened Monday, a day after the country marked the 31st anniversary of the Americans with Disabilities Act (ADA).

The ribbon-cutting took place two weeks ago, but they had to pass their final inspections before they could start selling food and drinks. Staff used that time to train, familiarize themselves with the menu and hand out free coffee to market the business. 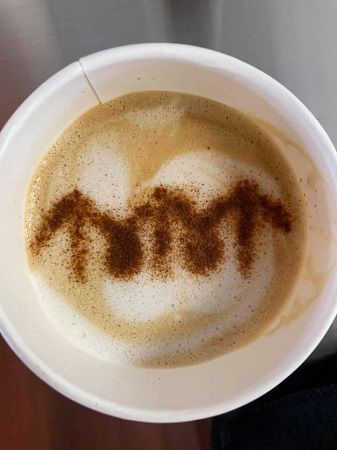 Tilford called it “a very busy first official day” with about 100 customers coming through the doors. She even got called upon to show off her barista skills.

Most days, though, she'll oversee the work training component of the business and assist the staff.

One of them is Rachel Travis. The 23-year-old will sometimes prepare food, but she worked the cash register Monday.

"I am really excited,” she said. "I do a lot with the KAA engagement outings already and I look forward to working at the coffee shop. I'll get to learn some new things, work with friends and talk with lots of people."

Kasey Johnson, 24, is glad to have the opportunity to learn new job skills and to work with a team. She’s most excited about the customer service side of the business.

"People like to drink coffee. Just Brew will be a place people can meet and drink coffee,” she said. “I just want everyone to have a great day.”

While there is a bigger purpose to Just Brew, at the end of the day, it’s "just a neighborhood coffee shop," Tilford said.

It has a traditional menu of coffee- and espresso-based drinks.

Just Brew uses a style of coffee machine that streamlines the processes for making some of the more difficult-to-make drinks. It doesn’t affect what type of beverages they can make and it allows Tilford, and the other shift supervisor, to focus on teaching skills. 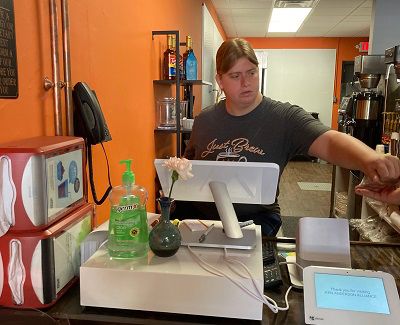 Assistive technology and universal design can be a key to making life more accessible to adults with disabilities.

"The machine is great because it simplifies things a bit. So a particular latte drink that may typically have 10 steps, it now has two. It helps make sure that the staff has the best footing for what they’re doing here,” she said.

The salads will be freshly made with lettuce grown at O2 Urban Farms, an aquaponics farm on Cincinnati’s west side. It’s another of KAA’s work programs. It has 10 employees.

"We’re trying to make as many things as possible in the shop so the staff can get that training, too," Tilford said. "So, if they want to go work somewhere else they can step right into a food prep role or taking orders at a POS (cash register) system, they’ll have experience with that."

It's not all about work with KAA though. There's a fair amount of play as well.

Every month the organization hosts about 20 social events — it could be a day at the ballpark, or a night out for dinner and a movie. Sometimes the group volunteers at another nonprofit such as the Freestore Foodbank.

About 230 take part every month. One of them is Tilford's husband, Gary Finn, who has cerebral palsy.

That's how Tilford first connected with KAA back then. She started volunteering for them back in 2017, but has worked with people special needs since 2002. 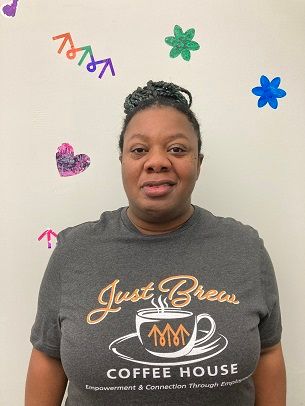 She was hired to run Just Brew, in part, because of that experience.

The Ken Anderson Alliance has even bigger plans for the future. They are set to launch a capital campaign to build a residential community in Springfield Township.

The Commons at Springfield will be open to anyone but designed to meet the needs of persons with developmental disabilities. The build-out of each townhome, or apartment will take into account the specific needs of the resident.

There will be a community center, a bike trail, exercise facilities, even a nine-hole putt-putt course. All things aimed at enhancing the quality of life of those who live there. Anderson said he’s hopeful the groundbreaking will take place in January.

Tilford said she always cries when she starts thinking about Ken Anderson Alliance and the work they do. She choked back tears a couple times while mentioning how much the organization and Just Brew means to her.

“I’ve seen it from a family member standpoint and now as an employee," she said. "We're really trying our hardest to provide opportunities that will allow people to shine.”

Even though they're still in their first week, KAA has plans to open a second coffee shop at Commons at Springfield. Many workers at that site will likely live in the complex, Tilford said.

“Some people use a person's diagnosis as an adjective to describe them, but that’s not what defines them,” Tilford said. "We may have team members with Down syndrome, but they're just team members to us."