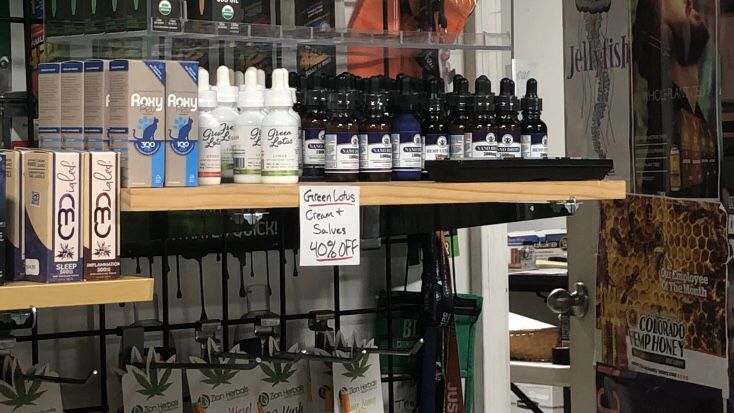 Lexington's Botany Bay is one of many shops in Kentucky that has sold Delta-8 THC products. (Spectrum News 1/Crystal Sicard)

LEXINGTON, Ky. — The Kentucky Hemp Association is filing an injunction against the Kentucky Department of Agriculture after a letter was sent to workers within the hemp industry banning them from distributing Delta-8 THC products.


Ginny Saville, with The Botany Bay in Lexington, is just one of many shop owners that supports the use of Delta-8 THC products. Saville said after learning about multiple raids in Kentucky, she had to get rid of all her products containing Delta-8.

“Some of them have been full of raids, like the police coming in and they'll take off everybody there and put zip ties on their hands behind their back and take all the merchandise. Not just a little bit that's in question, but everything,” Saville said.

Delta-8 is a cannabinoid compound that can cause psychoactive effects similar to marijuana. It can be extracted from both hemp and cannabis.

In April, the Kentucky Department of Agriculture sent out a letter stating distribution of the Delta-8 product is illegal. Saville said even though the product is off her selves, she stands with her industry and believes they have the right to sell these products.

“If they want to make it illegal, they can file a bill in January. We have a process. I go through that process," she said. "Every year, trying to get things changed. Obviously I'm not succeeding. But they know the process better than me. They can do it through the legislature, but until then they don't get to send the police out, and they don't get to just decide to tell everybody that you don't get to do this because we don't like it,” Saville said.

The Kentucky Hemp Association filed an injunction against the Kentucky Department of Agriculture asking them to stop their raids until they can go to court.

Katie Moyer, the Secretary for the Kentucky Hemp Association, said Delta-8 has over 100 different compounds with different benefits, and taking away these products is hurting not only the community but also the industry.

“We now have this chilling effect of other stores who are sacrificing potential income, stores are losing $4,000 to $5,000 a day or more on these products, and they're just simply scared to sell them and that's unfortunate, especially in a situation where the decision on whether or not this is legal has come down to a letter, as opposed to a specific law,” Moyer said.

The Kentucky Department of Agriculture’s spokesperson released a statement on the banning of Delta-8 products, citing Delta-8 THC's tendency to induce psychoactive effects similar to the effects of marijuana.

“When hemp advocates first approached policymakers about legalizing hemp, they assured everyone that hemp was different from marijuana and that it was not an intoxicating substance. Relying upon those assurances, the Kentucky General Assembly and the United States Congress passed laws legalizing hemp by creating a definition to separate it from psychoactive forms of cannabis that puts users in an altered state," The statement read. "Now, some want to argue that lawmakers accidentally legalized an intoxicating synthetic substance called Delta-8 THC. This position is outside the mainstream, so much so that even Colorado – a state known for legalizing recreational marijuana – has banned Delta-8 THC products.”

The Department of Agriculture asserts that claims of Delta-8 being "natural" are inaccurate, supporting their position with reports of Delta-8 THC being made with dangerous chemicals in lab environments.

"Delta-8 THC products do not contain compounds naturally extracted from the hemp plant. They contain synthetic Delta-8 THC compounds created in a lab. According to news reports, Delta-8 THC products can and are being made with battery acid and pool chemicals, are making people sick, and have traces of harmful chemicals and metals. That’s why poison control centers in Virginia, Michigan, and West Virginia have issued bulletins warning about the toxicity of these products.

“If legislators wanted to legalize this product, it would be simple enough for them to enact a law saying so. Because they haven’t, we have to follow the law and educate our license holders about what is legal and what isn’t.”

Saville said she stands with the injunction and hopes the Department of Agriculture will take into consideration their concerns for the industry. The injunction the Kentucky Hemp Association filed has been assigned to a judge in Boone County.