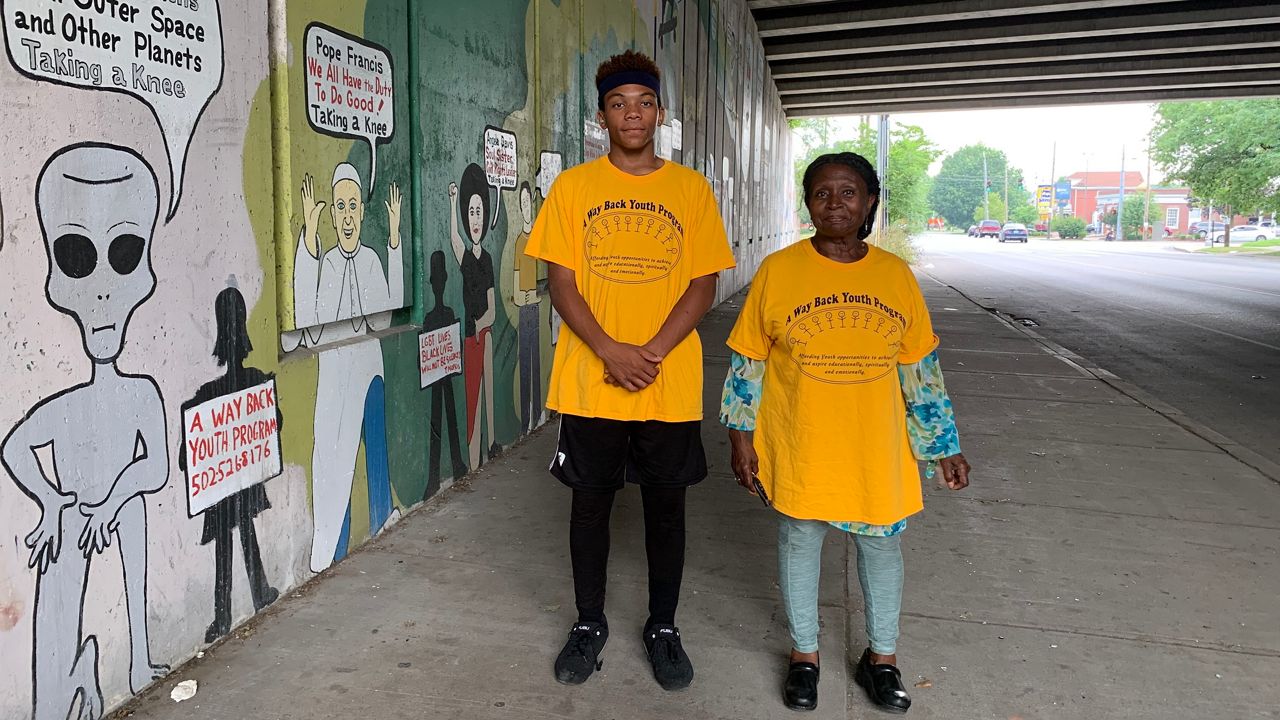 Member Leron Jackson, 12, and Pastor Edith Jones are part of the group that meets at the Take A Knee Bridge each week. (Spectrum News 1/Ashleigh Mills)

'A Way Back Youth' gets young activists' anti-violence message out

LOUISVILLE, Ky. — Young people in Louisville are standing up and speaking out to say, "enough is enough," when it comes to violence. Louisville Metro Police (LMPD) data proves, the shootings aren't decreasing.

So, some youth are making their anti-violence stance more visible. 'A Way Back Youth Program' holds picket lines and marches once a week every Friday from under the 'Take A Knee Bridge' at 34th and Broadway in West Louisville.

A drive down Broadway will take you under the Take A Knee Bridge, with its paintings and messages against violence. On Fridays, you'll also find the youth and participants of A Way Back Youth Program, holding signs and spreading the word to 'stop the violence.'

It's part of a church program, founded by Pastor Edith Jones. She wants young people to influence their peers, toward doing good.

"We want our children to live in a peaceful community where they can walk down the street and not have to be concerned about spraying gunshots coming at them," Jones says.

Leron Jackson, 12, is a rising seventh grader who comes to the marches each week. He's trying to make a difference, however small, hoping to sway young people from getting involved in bad things and falling victim.

"It makes me feel concerned, 'cause I just don't want to walk out and if I'm going to the store and people start shooting," Jackson says, worried on how close the shootings are to home.

This year is on pace to exceed last year's homicide record rate; Louisville hit 100 homicides a couple of weeks ago. There have been young victims, too.

"Kids don't deserve to go down like this," Jackson reacts.

He hopes the youth activism is making a difference. Jones believes it is, but admits, even former church youth group members have been killed.

"The first week we came out. The next, week I get a phone call to go and preach at a funeral for one of our youth that went through the program. He was 30, and he came in when he was 12," Jones recounts.

That was Remi Dawson, killed June 13 according to LMPD. The case isn't yet solved.

"All I know, is we need to continue because it's hitting almost every other family and it's just ... it's just too much," Jones laments.