Kentuckian to Olympian: Yared Nuguse punches his ticket to Tokyo

LOUISVILLE, Ky. — On June 27, Yared Nuguse quite literally chased after his dream. Nuguse ran a time of 3:36.19 in the 1,500 meter final to finish third, claiming the final team spot as he punched his ticket to Tokyo.


The DuPont Manual alum and Notre Dame track star has been crushing the record books since his sophomore year of high school. Nuguse is known for his legendary kick which helped him get a spot on the 2021 Olympic team.

“At first I was like I need to position myself to be where I want to be because if I want to be able to kick, I have to be up close to the front so I have a shot at winning. Then, coming around that last 200, I was where I wanted to be and I just started going and at that point there's almost nothing going through your head, you're just like run, run, run,” Nuguse said.

But the one that takes the gold? Qualifying for his first Olympic team. 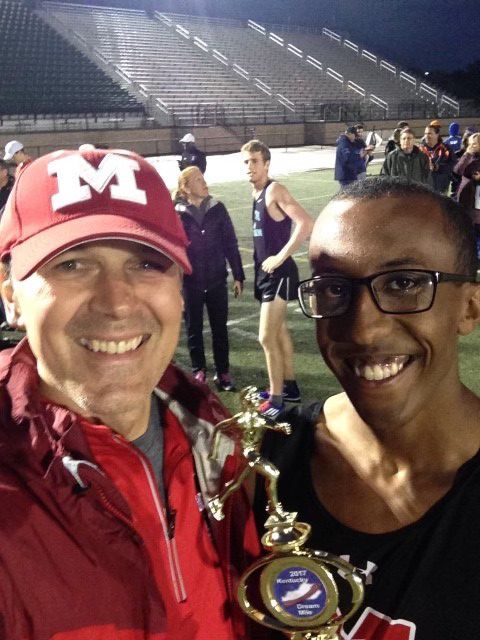 Yared Nuguse with his high school coach, Tim Holman wins the Dream Mile and sets a Kentucky stay record with a time of 4:06. (Tim Holman)

“It's still a little unreal I guess. I mean, I know it happened but it doesn't feel like it really did so i’m just taking it in. I’ll probably get to Tokyo and be like an Olympian, I'll come to terms with that but it's still just an unreal moment,” Nuguse said.

Something that would have never been possible without the help of Tim Holman, Yared’s high school coach at Manual.

“He didn't run cross country his freshman year. A PE teacher told me, 'Hey I got this kid, he ran a decent mile in PE.' So I hunted him down and found him in class and asked him, 'What do you do here at school?' He famously said, 'Science fairs, sir.' And I said, 'No no, what sport?' and he had been bowling but I said I think you need to come run for me,” Holman remarked.

As Nuguse embarks on this new journey, he is reminded of how it all started.

“Probably one of the best decisions I've made in my life, just deciding to go run for Holman because that's really just what started everything and I definitely wouldn't have gotten started without his kind of push to get me there,” Nuguse said.

Yared Nuguse will use his COVID year to finish his last year at the University of Notre Dame. Nuguse plans to run professionally in the future and make another Olympic appearance.