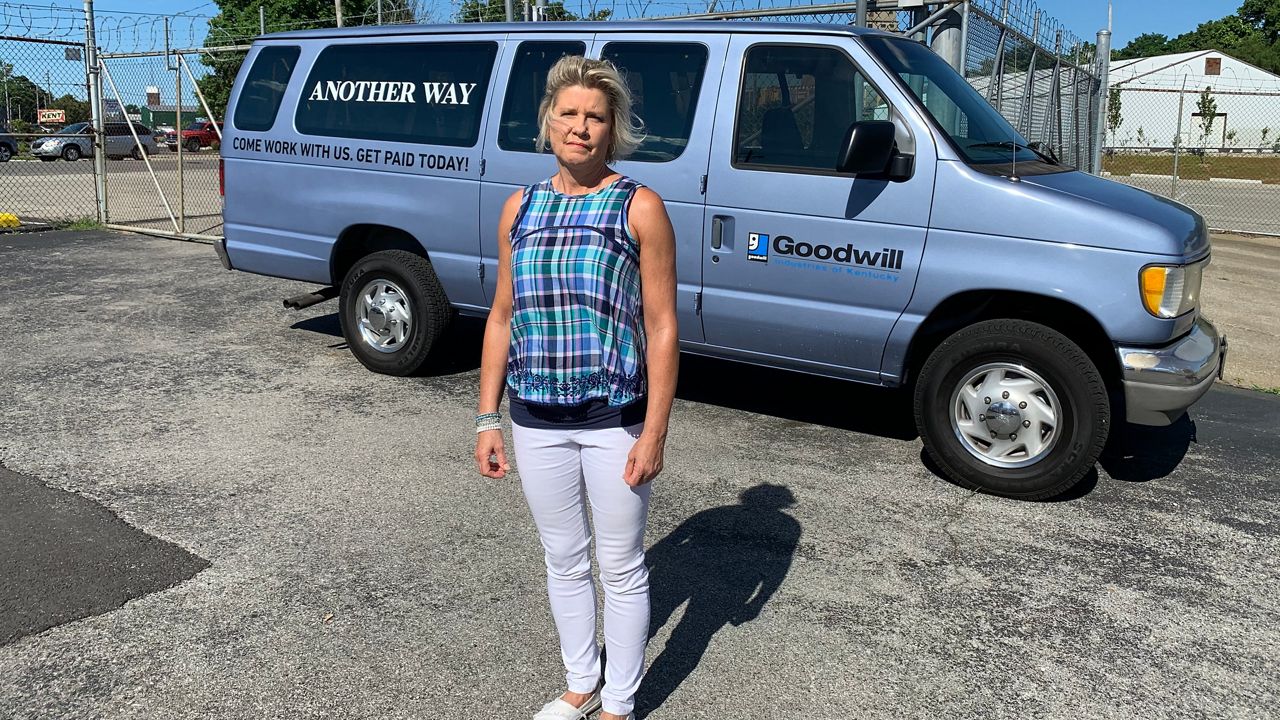 Sharon Allgeier is the driver of the "Big Blue" bus to get homeless some work for a day. (Spectrum News 1/Ashleigh Mills)

How Goodwill's 'Another Way' initiative is connecting homeless people with jobs

LOUISVILLE, Ky. — When Metro Council votes on Louisville's budget Thursday, it will be finalized to pay for many things. Among them is Goodwill's "Another Way" initiative, which connects houseless people with jobs. It's a small item, $279,400, in the grand scheme of $986 million. However, the pilot program's van driver feels from personal experience that it is money well-spent.

That's why she's the perfect person to drive the van and gather the people around the city who find themselves down on their luck. She affectionately pointed to the back corner of Goodwill's parking, laughing, "there's Big Blue!" pointing to the van she drives.

There are several designated locations around the city, known to host panhandlers, where she's gone over two months each Tuesday and Thursday. Allgeier offers a day's work for lunch and a $50 Visa gift card. So far, 25 people have participated.

"You know, a lot of us are one — could be maybe one paycheck — away from being homeless. So, we're all the same," is the reason why she believes people should empathize with houseless individuals.

The jobs worked range from installing flooring for basketball games, event prep and clean-up and litter pickup. The larger goal, however, is to sow a seed. There's a limit on how many times a repeat worker can do the single-day work. Allgeier hopes there can be an intervention when people are shown the opportunities like housing assistance and career soft skills training through Goodwill. She reported that two people have even successfully secured career paths out of the initial "Another Way" day job.

"We see visible need on our streets every day," she explains, arguing why Another Way funding "is a need" in this next city budget.

"There really are a lack of options for people who are in crisis to have somebody meet them where they are and offer them an opportunity to be of service and earn some income," George said.

Allgeier says the funding from Louisville Metro will help hire more people for the program and expand to get more vans. She wants more people to help do the job she loves.

"I mean, I've seen so many lives changed just by somebody getting out of their comfort zone and going out there and helping them, so I don't know what I'd do besides this," she glowed.