100 years after the Tulsa massacre, descendant leads the team searching for mass graves

Some 100 years ago, hundreds of African-Americans died at the hands of a white mob in Tulsa, Oklahoma. That was followed by decades of silence about the massacre and the destruction of a mecca of Black enterprise known as “Black Wall Street.”

A century later, the city is overseeing a project to find the bodies of those who were killed in June 1921. A descendant of one of the survivors, a forensic anthropologist from the University of Florida, is now helping to lead that search.

“I am grateful to be able to do it because I did not go into forensic anthropology to work on this. I didn’t know,” said Dr. Phoebe Stubblefield. “I did not love the profession because there was a race massacre and I was going to find and identify these individuals and bring them back into our society. That wasn’t it! I didn’t know about it. God does all this.”

As of Thursday, Stubblefield and her team are on Day 14 of the formal exhumation process at Oaklawn Cemetery. To date, they have been able to find 28 burials, and started using a ground penetrating radar at another site, Rolling Oaks Memorial Gardens.

At the turn of the century, roughly 80 years after the massacre, the state of Oklahoma commissioned a report that identified possible locations of the mass graves. Those included Oaklawn Cemetery, Rolling Oaks Memorial Gardens and Newblock Park. 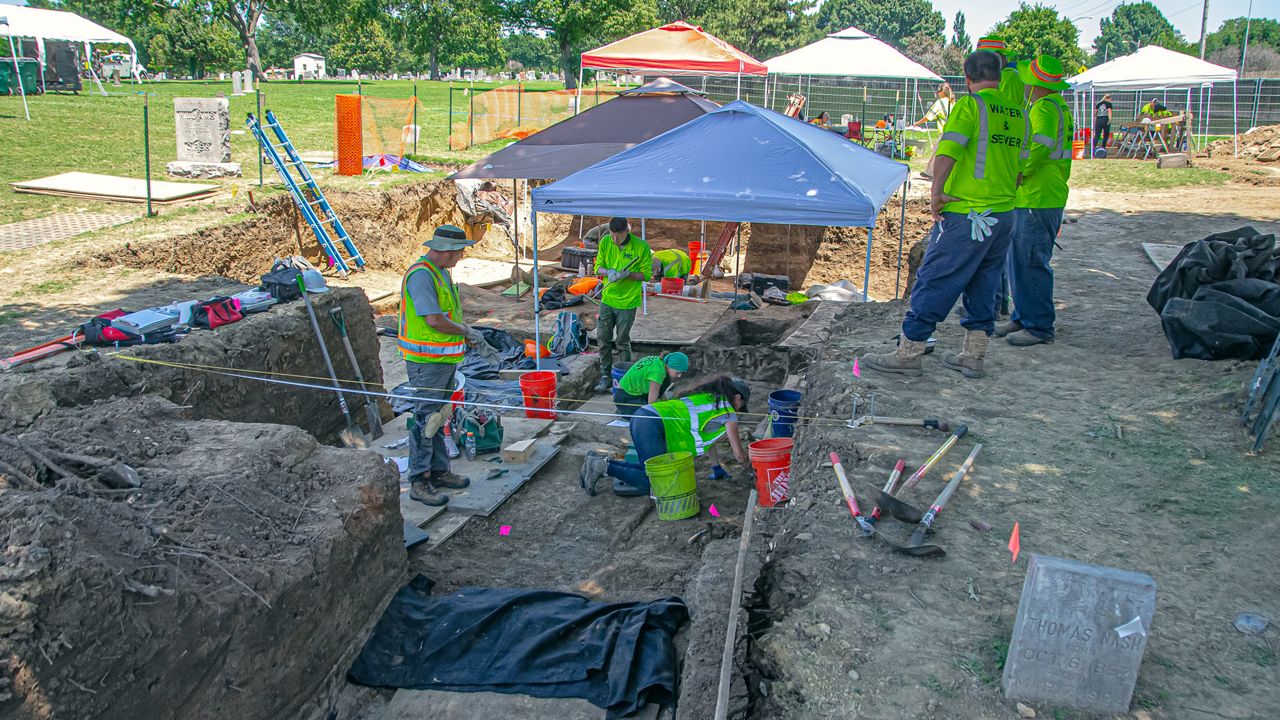 Stubblefield, whose family is from Tulsa, said she grew up visiting the city and her family every year until she went off to college. When she was asked to be a part of the team 20 years ago when the report was commissioned, she told her mom the news.

That was when she learned she was so much closer to this work than she thought.

After doing some genealogical research into her own family, she learned that Anna Woods and her family were important to the Greenwood community. Her husband, Ellis Walker Woods, was a founding principal of the city’s first Black high school.

“My family history connects me to this, but it’s really an act of grace that I’m at all involved because I did not know there was a race riot or race massacre or Tulsa disaster or Greenwood disaster, any of the names. I didn’t, it was not history for me,” Stubblefield said.

Watch: How the Tulsa team identifies remains as victims of the 1921 massacre

As Stubblefield and her team look to rediscover this history in Tulsa, they’re taking each body, draping it in black and then giving him or her a funeral procession to Stubblefield’s mobile lab.

“I wanted a solemn way of getting them to the lab so that we could recognize that these aren’t specimens,” Stubblefield said.

From there, she and others work with the remains and any artifacts that may have been discovered nearby to learn more about them and how they died. Signs of trauma help point to whether or not they were a victim of the Tulsa Massacre in 1921.

Stubblefield hopes that they will be able to continue their search for these mass graves in the city, to one day be able to tell their stories that have been lost to time.

“I wanted the community to have a chance to recognize that we’re honoring them, we’re not turning them into specimens and the community will work on some kind of memorial that’s appropriate for the circumstances of each decedent,” Stubblefield said.