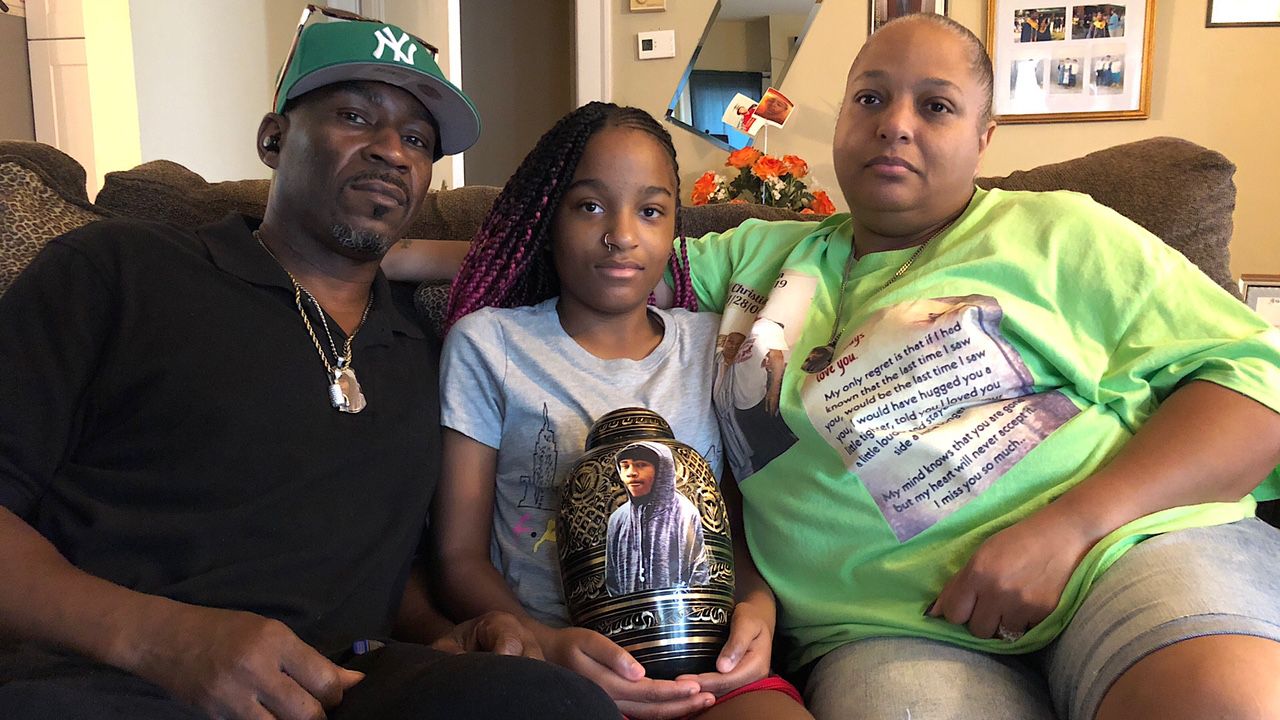 Part of the Gwynn family poses with the urn of their son and brother, 19-year-old Christian Gwynn, who was fatally shot in December 2019. (Spectrum News 1/Eileen Street)

LOUISVILLE, Ky. — Memorial Day this year marked 77 criminal homicides in Louisville and almost all of them were due to gun violence. As the number of fatal and non-fatal shootings continue to rise in Louisville, advocates continue to speak out against the violence.


“He just loved everybody. Everybody just loved him," said Krista Gwynn about her 19-year-old son, Christian.

“Chris, he was a friendly guy. I just kind of miss him bringing in that brightness, you know,” Navada Gwynn said about his son.

“He was the last homicide in Louisville of 2019. To us, that makes us feel like we have a purpose to sit here now,” Krista told Spectrum News. 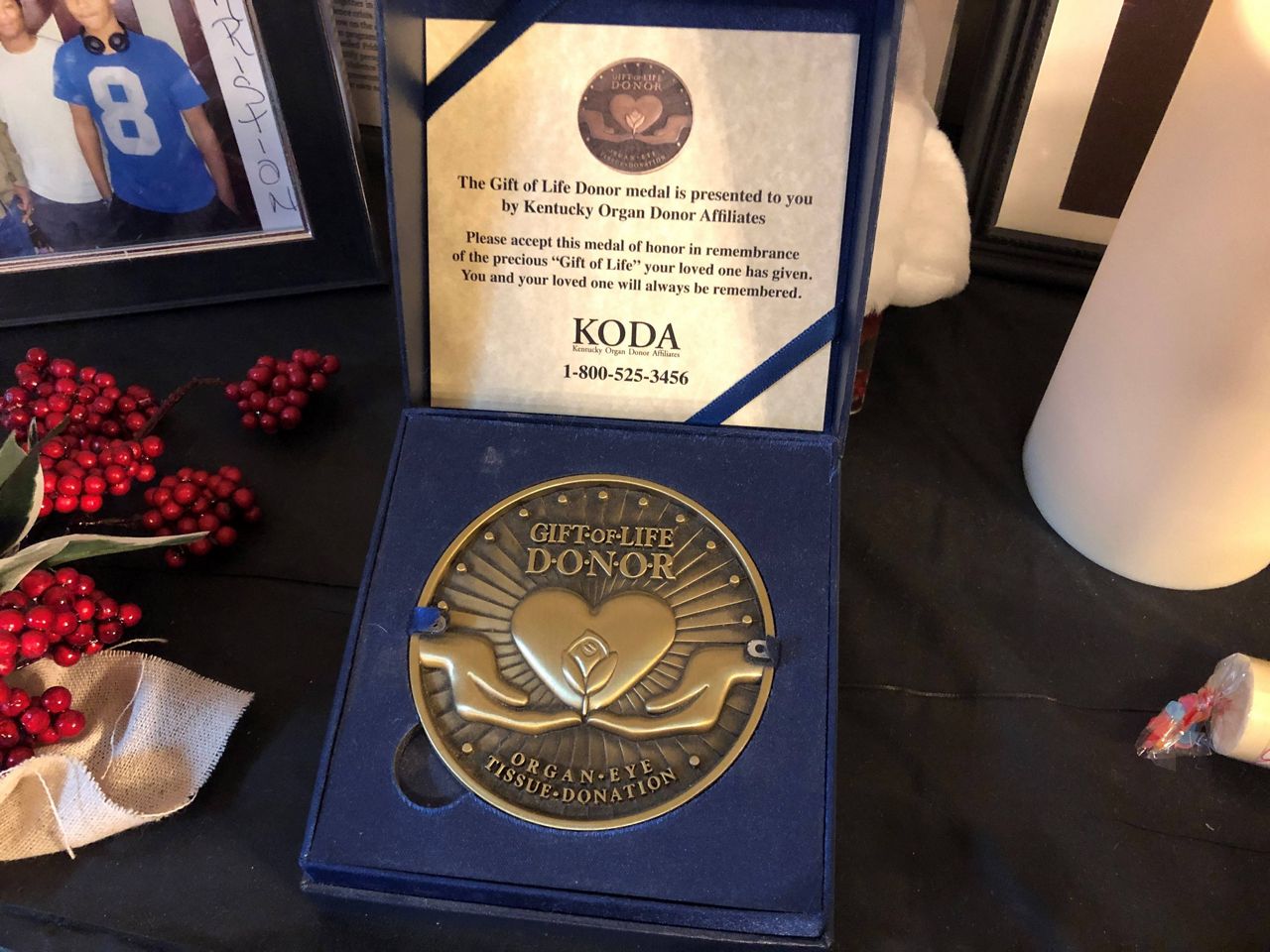 The Gwynn family says they donated their 19-year-old son's eyes, heart ventricles, and muscles in his thighs to Kentucky Organ Donor Affiliates after he was fatally shot in December 2019. (Spectrum News 1/Eileen Street)

Their purpose – to speak out against the rise in gun violence in Louisville.

According to Louisville Metro Police Department data provided to Spectrum News via email, in 2019, the year Gwynn’s son was fatally shot, there were a total of 92 criminal homicides. In 2020, there was a record number of 173 criminal homicides in Louisville.

However, five months into this year, as of May 31, 2021, there have been 77 criminal homicides total. Seventy-five of those were due to gun violence.

“To be just in June, and you’re almost beatin’ a whole year in 2019 when I lost my son, it’s just mind boggling. How can we live like that?” Krista said.

Christopher 2X, founder of Christopher 2X Game Changers that aims to end violence long term in Louisville, said that in his 20 years of observations, the reasons for gun violence is changing.

“It doesn’t take drugs to be entered into the issue anymore, for people to lash out and use gun violence as a way to handle their emotional issues, unfortunately, in a violent way, and equally at the same time to settle disputes and differences,” 2X said.

The Gwynn’s said they turned their pain into action by working with Christopher 2X Game Changers to mentor youth, especially those who have lost a loved one to gun violence.

“Because as we sit here as gun violence survivors, I know my kids feel that way. They feel angry. They feel revengeful, and even though they are not capable, I understand because I hear it out their mouth how vengeful they want to be for losing their brother. So I can understand how it can be an ongoing cycle,” Navada explained.

The Gwynn’s said they want to see better communication between the community, LMPD and Metro Government, police officers genuinely getting to know people in the community, and neighbors speaking up when they witness something.

“I understand your fear, but you still have to speak up because you seeing something, and if you say something you can stop them from doing it again. You don’t stop these kids, they gonna keep doing it because now they feel invincible,” Krista said.

To those committing the acts of gun violence, the Gwynn’s say stop and think about the repercussions.

“You didn’t just hurt one person. Now you’ve hurt two families because eventually you are going to get caught, and then when you get caught, you have to do time. So just like that mother’s grieving of that life lost, your parents  gonna be grieving cause now you are no longer free,” Krista said.

Spectrum News reached out to LMPD for an interview but no one was available in time for this story.

This Saturday, June 5, the Gwynn’s, along with others against gun violence, are participating in the Wear Orange Community Peace Walk because June is Gun Violence Awareness Month. The walk goes from 12-2 p.m. and starts at 4106 Greenwood Ave. in Louisville. People are asked to wear orange because it symbolizes gun violence awareness. More info can be found here.