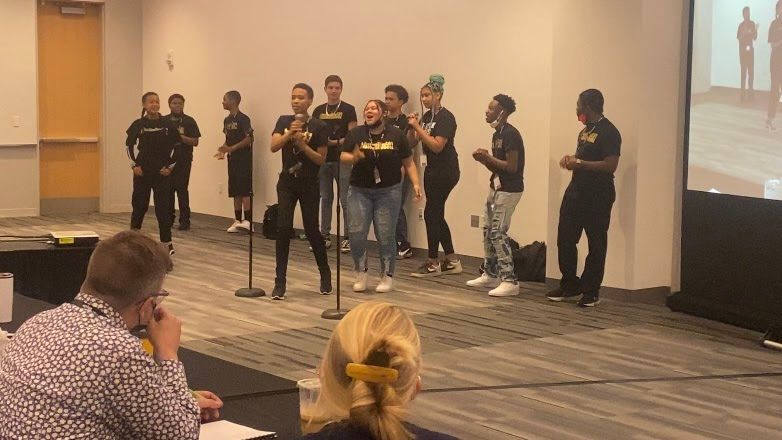 Since January, eighteen teams of 3rd - 12th graders have been tackling topics like equal rights, community investments and environmental and educational justice.

A group of students at W.E.B Dubois Academy collaborated with Mighty Shades of Ebony to work on the Trick Out Trash Cans initiative, which is a project to design trash cans in high-pollution neighborhoods to discourage littering.

Saturday morning, they pitched their solutions to community leaders and got real time feedback and advice about how to move forward with their projects.

“The fact that the mayor said that he’s 100% on board with it, that was really happy to hear because it just shows that he’s really excited about it and that just shows that the rest of the panel was too so. I’m excited to work with him,” said W.E.B. DuBois Academy graduate Malachi Mohammed, a member of the Trick Out Trash Cans team.

“They learned about every factor that had to do with justice and then they decided instead of worrying about how they were just going to complain about it, this program is for them to do something about it,” said Justice Now co-founder NyRee Clayton-Taylor.

Other ideas presented included a house for the homeless, an inclusive playground and getting the Crown Act passed.

Students said they’re proud to have a community that believes in their ability to make an impact at a young age.

“We are the ones that are going to be becoming the next presidents, the next lawyers, the next justices,” Mohammed said. “So it’s important for us to talk about these issues so that we can better the world not only for us when we grow up but for everybody.”

Students will start working on their projects this summer and organizers are looking forward to future JusticeFests.

“We also have a commitment from KDFF for five years so we are definitely excited about the work that our students are going to be doing,” Clayton-Taylor said.