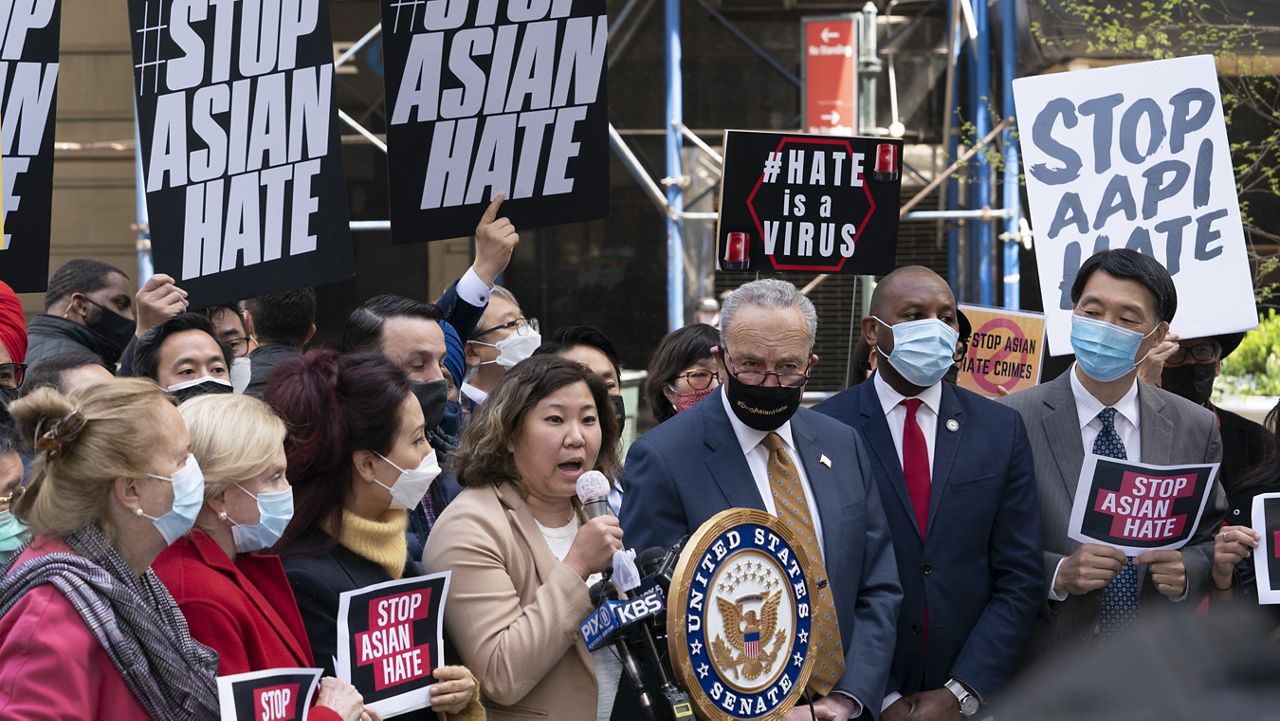 The House of Representatives voted overwhelmingly to pass the COVID-19 Hate Crimes Act, a bill which aims to combat the rise in hate crimes towards the Asian-American and Pacific Islander community amid the coronavirus pandemic.

One of the most meaningful ways that we can celebrate #AAPIHeritageMonth this year is to ensure justice and freedom from the fear of attack for members of the AAPI community.

Together, we will #StopAsianHate. https://t.co/iksIqFRJWt

The bill now heads to President Joe Biden’s desk for his signature after the Senate passed the bill in a similarly bipartisan fashion last month.

The Senate voted 94-1 to pass the bill in April — only Missouri GOP Sen. Josh Hawley voted against the bill.

The bill, introduced by New York Rep. Grace Meng and Hawaii Sen. Mazie Hirono, would provide an ability for local and state law enforcement agencies to respond to hate crimes, assign a point person in the Department of Justice to expedite review COVID-19-related hate crimes and deliver guidance to combat discriminatory language related to the pandemic.

“Those of Asian descent have been blamed and scapegoated for the outbreak of Covid-19, and as a result, Asian Americans have been beaten, slashed, spat on, and even set on fire and killed," Rep. Meng said at a press conference ahead of the vote. "The Asian American community is exhausted from being forced to endure this rise in bigotry and racist attacks.”

Rep. Meng represents a district which has a large Asian-American population in the New York City borough of Queens. Meng says her community has faced “despicable and sickening acts of hate and violence” amid the COVID-19 pandemic.

In March, a gunman killed eight people in shootings at three Atlanta spas, including six women of Asian descent. And in April, a woman was brutally attacked outside of a grocery store in New York City. The COVID-19 Hate Crimes Act aims to address incidents like these on a federal level.

"We formed Stop AAPI Hate in March of 2020, because we saw the emergence of COVID-19 related hate directed at our communities,” Manjusha Kulkarni, the co-founder of organization told Spectrum News. “And sadly, since that time, in a one year period, we've received over 6,600 self reported incidents of hate against Asian-Americans and Pacific Islanders. "

The bill is the most substantive congressional response to what has been an alarming rise in racist sentiment against Asian Americans, fueled in part by derogatory language about the virus’ origins in China. Donald Trump, while president, played into that narrative with derisive nicknames for the virus.

A recent study showed that the use of anti-Asian hashtags skyrocketed on Twitter last year in the days after then-President Donald Trump used the term “Chinese virus” for the first time in a tweet. Trump also often used terms such as “China virus," or other variations on the same theme, during speeches and news conferences.

“This is not a controversial bill,” Sen. Hirono said before the Senate passed the bill. “It focuses federal leadership to investigate and report hate crimes and other incidents, and provides resources for our communities to come together to take a stand against intolerance and hate.”

Sen. Hawley, the lone opposition vote, said last week that the bill was “hugely broad,” arguing that it “mandates all this data collection in expansive categories that the federal government will collect.”

Several other senators voiced similar concerns, and worked alongside Democratic colleagues to introduce a number of amendments ahead of Thursday’s vote to make the language in the bill less expansive.

Sen. Hirono and Sen. Susan Collins (R-ME) worked together to make explicit reference to Asian Americans in the bill’s text, all “while retaining the bill’s core purpose to combat anti-Asian hate,” Hirono said in a statement on Wednesday.

President Joe Biden applauded the Senate for passing the bill "by an overwhelming margin" in a statement after the Senate passage in April, specifically noting the leadership of the Congressional Asian Pacific American Caucus.

"This critical legislation will bring our nation one step closer to achieving justice and equality for Asian American, Native Hawaiian, and Pacific Islander communities," Biden wrote. "And, I was happy to see the Senate add the bipartisan Jabara-Heyer NO HATE Act as an amendment, which will further our national efforts to stand strongly against acts of hate and violence.”

"Too often throughout our history, acts of hate and violence directed at Asian Americans have been met with silence," Biden added. "Our nation must stand together to speak out against hate, and declare unequivocally: These acts are wrong. They are un-American. And they must stop.”

Spectrum News' Rachel Tillman and The Associated Press contributed to this report.