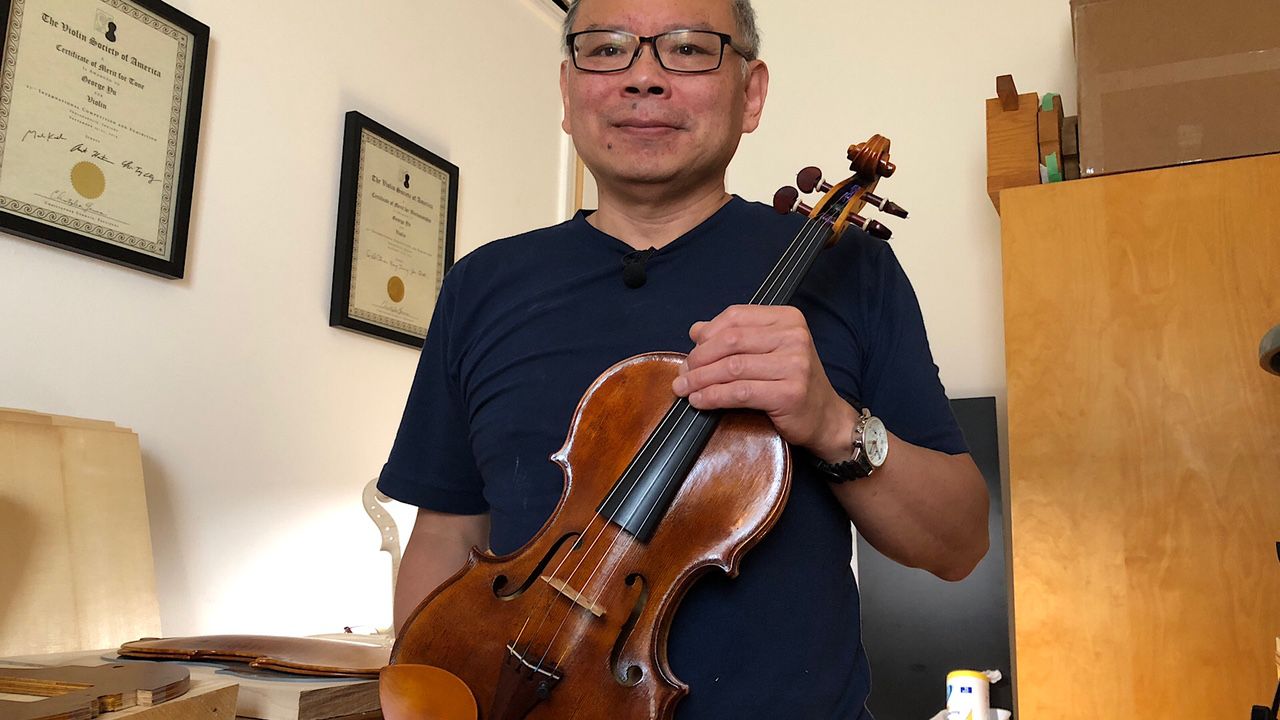 George Yu, an award-winning luthier based in Louisville, poses for a photo with one of the violins he handcrafted. Yu's violins retail for $25,000. (Spectrum News 1/Eileen Street)

‘I missed working with my hands:’ Why this former engineer is now literally making music

LOUISVILLE, Ky. — If you’re thinking about switching careers to follow your true passion, George Yu’s story will inspire you.


Yu, who emigrated to Louisville from Canada in 2018, started playing violin when he was nine years old.

“It’s the closest to singing, and it’s so expressive of being human,” Yu said, regarding his passion for playing the instrument.

After nine years as an engineer, Yu decided to switch careers. In 1999, he graduated “at a mature age” from the Violin Making School of America in Salt Lake City.

“Being a software engineer, I enjoyed the using my head part of it, but I really missed music, and I missed working with my hands, and violin making really allows me to do all three of them,” Yu said.

Yu told Spectrum News 1 that making violins is very cerebral, which he likes. He also applies his engineering skills such as math and physics to the process.

The techniques Yu uses date back to some of the first violins made, but he also uses today’s technology, such as CT scans.

Yu has scanned various violins, such as the "Brookings" Amati made by Nicoló Amati, part of the Amati family who were Italian violin makers centuries ago. The “Brookings” is currently located in the Library of Congress in Washington D.C.

“We don’t know for sure who invented the violin, but, if there were an inventor, it would’ve been Nicoló Amati’s grandfather, Andrea Amati,” Yu explained. “And Nicoló happened to be the best out of the family.”

All of Yu’s handcrafted violins are modeled after Amati violins. Yu studies the CT scans of Amati violins and other centuries-old violins to learn the patterns and shapes to craft his own unique style.

“They will give detail as to the shape of the instrument, all along its length and width, because that shape varies, and having good shapes, arches, is crucial to having a good sounding instrument. That’s one of the things,” Yu told Spectrum News 1.

Some of the tools Yu uses date back centuries, such as Horsetail weed, which Yu explained is a lot finer than sandpaper.

“Some people actually do use sandpaper, but this is also very traditional. This used to grow, or still does grow, along the banks of the Poe River in Cremona [Italy], the city of Amati, Stradivari, Guarneri, and it is said that they used it as well,” Yu explained. Also based in Cremona, Antonio Stradivari was an Italian luthier and Guarneri is an Italian family who also made violins, like the Amati family, centuries ago.

Some materials Yu uses no other luthier does, such as his varnishes. Yu explained that he developed them with his mother, S.H. Yu, who has a doctorate in chemistry.

The meticulous craftsmanship Yu gives to each violin he makes is reflected in their price, which is $25,000 each.

Yu’s violins are also award-winning. For example, in 2014, he received awards for tone and workmanship from the Violin Society of America Violin Making Competition. Yu said only three out of 246 violins submitted that year received that double-distinction.

Violin making is Yu’s passion, but it’s also his art.

“It’s very much an expression of myself. Of different interests that I have all put together,” Yu said.

One of his great interests is working with his hands, which is one of the reasons Yu switched from engineering to violin making. Yu said making a violin is an open-ended engineering question.

Yu also makes violas. His violins and violas are sold at dealers in the United States and at one dealer in Canada. Yu said various violinists, like one with the New York Philharmonic to advanced students at music conservatories, play his violins. To learn more about visit George Yu’s website.