WASHINGTON, D.C. — At 13-years-old, Alex Otte's life changed forever when a drunken boater crashed into her while she was jet skiing on Lake Harrington, outside of Lexington, Kentucky.

“He hit me from the side going over 60 miles per hour which is unheard of on the lake but especially on a lake this narrow. He threw me off the jet ski. I landed face down in the water. The boat went up over the jet ski and came down on top of me," Otte said. “When the boat came down on top of me, the propeller came down on both of my legs. My left leg was under the water just enough that it only required stitches. But my right foot was completely severed by the propeller."

Now, the national president of Mothers Against Drunk Driving, at just 24-years-old, Otte said she's physically active and strong enough to carry the heavy weight of her prosthetic limb. More difficult: having the mental fortitude to wrangle with insurance companies to get the necessary coverage. 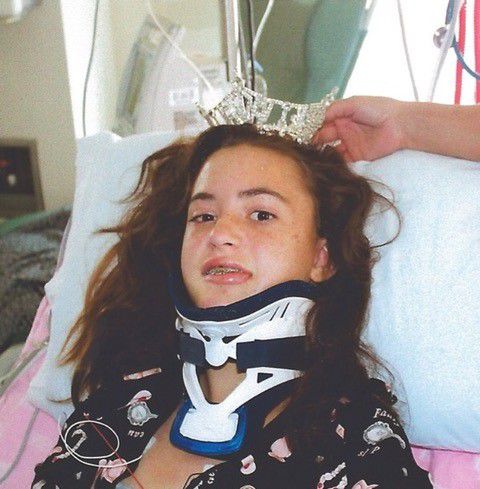 Alex Otte in the hospital shortly after the accident. (Photo/Alex Otte)

“The leg that I wear now was denied five times. I got a phone call while I was in a hallway in college that said we've denied your leg again. Please take it back to your doctor. Not only did this drunk man try and take so much away from me. Now insurance is doing it too,” said Otte, describing a call she received when she was a college student at the University of Kentucky (UK). She graduated from UK in 2018 with a degree in political science and journalism.

Otte now has the microprocessor ankle she needs after getting the support of the Amputee Coalition and others, but she said it shouldn't have to be such a battle for amputees like her. The bipartisan Triple A Study Act before Congress co-sponsored by Bowling Green Republican Brett Guthrie aims to examine what can be done to help more people obtain prosthetic devices.

“What we want is a study. It’s a GAO, Government Accountability Office, study, a non partisan study, just to look at the barriers. As these develop and come on the marketplace, how do we make them available, quite honestly, how do we make them affordable. They are robotic so they are expensive,” Guthrie said.

Any member of Congress can request a GAO study but the agency prioritizes Congressional mandates as a result of signed law. Otte has met with Guthrie several times to advocate for amputees. Alex Otte during a visit to the U.S. Capitol. (Photo/Alex Otte)

“She’s somebody who comes to your office, you don’t forget when they walk out. She’s very passionate,” Guthrie said.

Owensboro Mayor Thomas Watson has owned and operated a prosthetics lab for decades. Advocates say just 35% of amputees actually ever get a prosthetic device.

“I lost my leg when a bulldozer turned over on me when I was nineteen. I'm here by the grace of God. There's no question about it. Ten thousand pounds lands on your chest, you probably should not make it,” Watson said. “Without proper health insurance, without proper care, a lot of times people could go back and be functional, productive citizens in their community, if they had a prosthesis."

There are at least three members of Congress who have prosthetic limbs: Rep. Brian Mast, (R-FL), Rep. Jim Baird, (R-IN), and Sen. Tammy Duckworth, (D-IL). Duckworth is a co-sponsor of the Triple A Study.

Otte is preparing for her wedding, excited for that special walk down the aisle.

“I’m getting married in eight days and I'm able to wear heels to my wedding. I wouldn't have been able to do that with the leg I had before," she said.