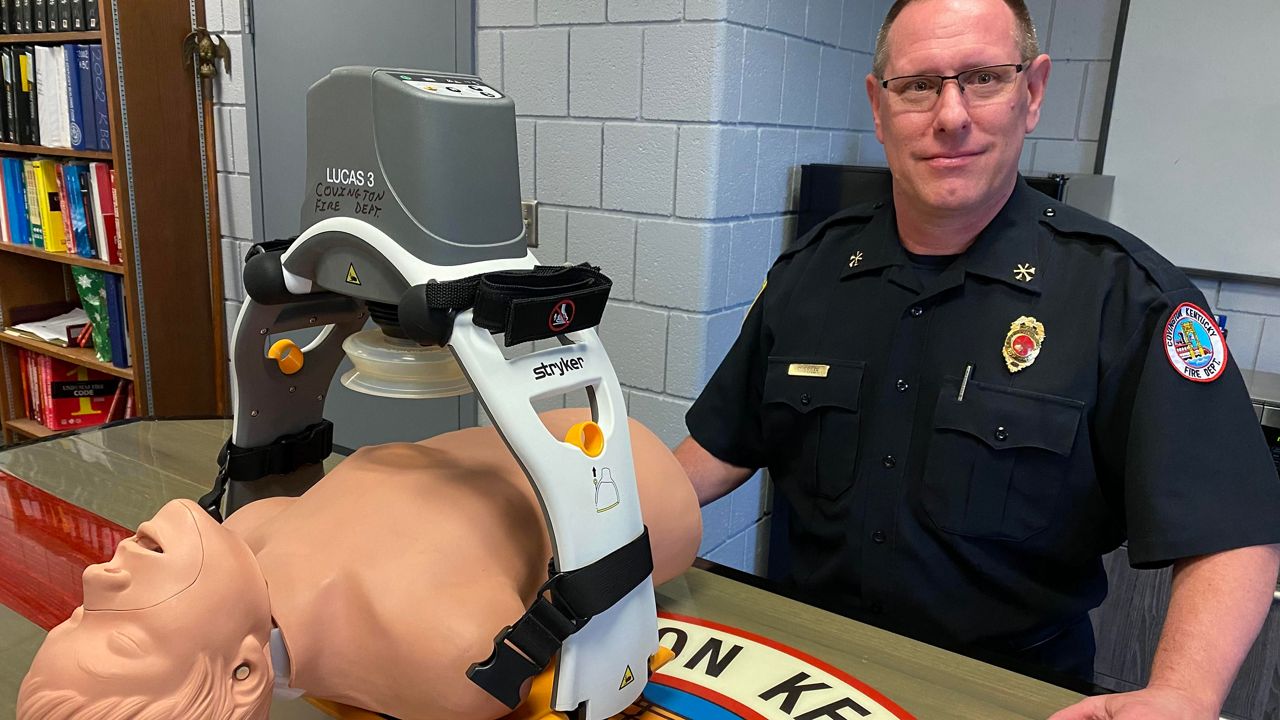 The Covington Fire Department now has six devices, with a seventh on the way. (Spectrum News 1/Sam Knef)

COVINGTON, Ky. — Paramedics from the Covington Fire Department are using new chest compression machines to help save more lives. The technology is a safer, more efficient way of getting someone whose heart has stopped to start back up again.


As hard as they try, paramedics’ hands can’t match the efficiency of a machine when applying CPR. The fire department now has six Stryker Lucas 3 mechanical chest compression devices, and has ordered a seventh.

“It’s just going to continuously do chest compressions. And we do everything around that including defibrillation, intubation, and all that stuff,” said Assistant Fire Chief and head of EMS Operations David Geiger. “It’s doing the work of two or three providers, and allows those three providers on scene to focus on those other things, because they offer that ability to provide perfectly timed, perfect depth compressions with every compression. And they don’t get tired.”

The seventh was purchased using funds the department received from the  Kentucky Fire Commission Grant. That device will be placed on Pumper 5 on the south end of the city, which is more geographically isolated from immediate backup than other stations. They cost around $15,000 each.

They allow the department to limit the number of paramedics exposed to people who could have COVID-19. The machines also keep responders safe by allowing them to not have to manually apply CPR in the back of a speeding ambulance.

“Possibly holding onto a rail with one hand while trying to do chest compressions with the other hand, and the CPR just isn’t effective,” Geiger said.

Most importantly, Geiger said, the machines greatly improve the chance of successful resuscitation

“Every minute you go without CPR once the heart stops beating, it’s a 10 percent reduction in your chance of an intact survival,” he said. “The quicker we get there, and the quicker we get CPR, good effective resuscitation going, the better that patient’s chance of survival.”

About 18 months ago, the department started looking at how it was responding to cardiac arrest calls. It put together a committee to start analyzing the data.

“Even professional providers struggled to provide compressions that are the proper depth, and at the proper timing for more than a couple minutes. You have to constantly switch out those providers,” Geiger said.

The department averages about 60 to 80 cardiac arrest cases a year.

Since getting the machines, return of a sustained heart beat to patients in cardiac arrest has gone up about 10 percent, Geiger said. Patients discharged with no nerve damage has gone up four percent.

The fire department has also changed its approach to cardiac arrest with the new machines, on the recommendation of the committee it put together.

Rather than trying to get patients in an ambulance to the hospital as soon as possible, the department now focuses on applying better care at the scene.