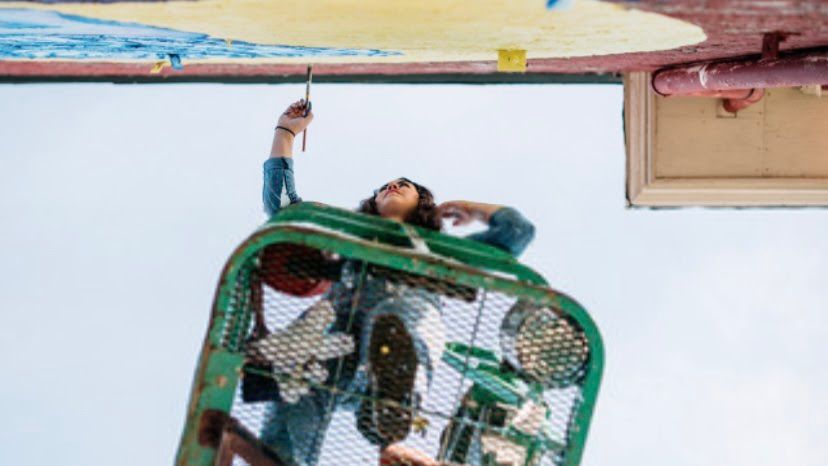 Beyond what meets the eye: Clifton project creating art for those with visual impairments

LOUISVILLE, Ky. — Students at the Kentucky School for the Blind (KSB) inspired a local artist to create art accessible to those with visual impairments.


The project will highlight the history of the Clifton neighborhood and will be located across from KSB and the American Printing House for the Blind.

Murals and paintings by Liz Richter can be found all across Louisville.

Richter is a former KSB visiting artist who lives in Clifton where the school is located.

Years after she visited the school, she was inspired to create artwork that was accessible to the visually impaired community by her former KBS students who shared the sidewalk with her while they completed navigational training.

It was important that the artwork be located in Clifton where two stable institutions, the KSB and the American Printing House for the Blind, are located.

"There hasn’t been any public art that’s really tried to consider a blind and visually impaired audience and what a better place to test out that model or to like work on that part of pubic art than in the Clifton neighborhood where this population exists, and not only that, where these cultural institutions exists as well that support that group of people,” said Richter.

Clifton is one of Louisville’s oldest neighborhoods, and Richter wants to bring the history of the neighborhood to life through a walking art tour.

She took her idea to Louisville Visual Art and the Multisensory Public Art for Clifton hit the canvas.

"Public art for a long time has sort of assumed that people who interact with it have a sense of skills and abilities and that’s left a lot of people out,” said Louisville Visual Art Executive Director Kristian Anderson.

This community-based project is changing that by learning how those with visual impairment best experience art.

"We just feel like it’s really important to make sure that we are considering and making sure that those interactions are genuine and that we’re not just putting a braille plaque, but we’re really thinking about how they could enjoy the experience as well,” said Richter.

After surveying KBS students, Clifton residents and individuals living with blindness, the team came up with a list of different elements to incorporate in the art project, including audio descriptions, textured surfaces, high contrast visuals, kinetic interaction and aromas.

The team hopes the project will spark a light to inspire others to consider all audiences when creating art.

"This is really sort of a model and a paradigm to think about not just about this project but even beyond so for the Louisville area and hopefully for the whole region and how they think about public art,” said Anderson.

Richter hopes the art project will be an opportunity for students at KBS to discover the history of Clifton and learn about art in a new way.

She plans to create a curriculum for Jefferson County Public Schools and local private schools to teach those students about the visually impaired community and how to support it.

The project is still in the early stages, but the team hopes to unveil a portion of it in October.

The Kentucky School for the Blind Charitable Foundation is the project’s leading founder. Other donors include South Arts, Fund for the Arts, Metro Louisville and community members.

The property for the project is provided by New Direction Housing Corporation. The KSB and the American Printing House for the Blind are both project partners.