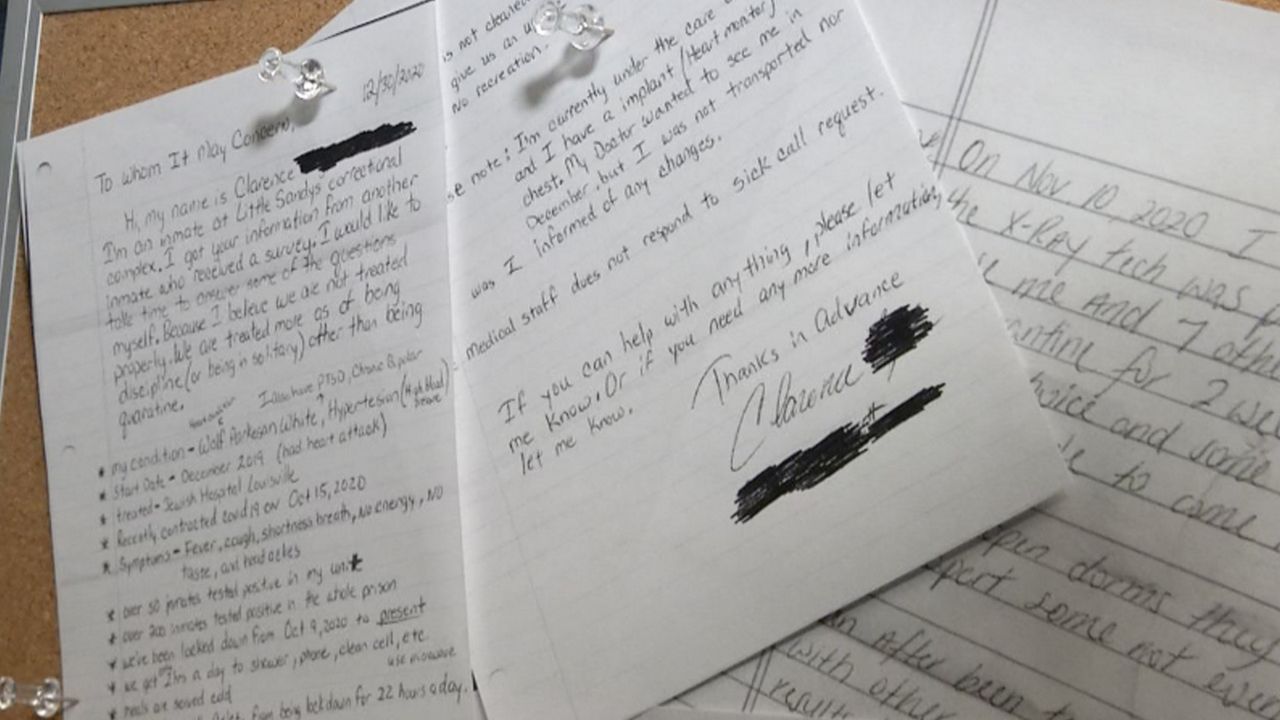 Letters from behind bars claim COVID conditions "are so bad" at Kentucky prison facilities.

LOUISVILLE, Ky. — In handwritten letters, from behind bars, inmates detail what they claim to be poor COVID-19 conditions in state prisons.

The letters were sent to the grassroots prison abolition group, 'Campaign to Fight Toxic Prisons,' of which Robin Kunkel is involved. She sent surveys to people in state facilities.

Written out on sheets of notebook paper, an inmate writes, "Things are so bad." Another says, "We are not monitored for [COVID] symptoms." Another person writes, "We do not have [sanitizer] in the cell."

"We also ask them to describe the testing process," she tells Spectrum News 1. "People are taking a lot of great personal risk of retaliation, by telling us what’s happening," Kunkel adds.

That's what she feels is to blame for a slow response rate. Kunkel believes inmates are scared they could get in trouble if they respond. She's hoping, ultimately, to get at least a 10% response rate. That's about 2,500 inmates. So far, she's heard from 70.

Because of what she's learned in the letters, Kunkel is one to renew efforts in pushing for more inmates to be released. That means Kunkel, her group, and family members of inmates want, “anybody who is elderly, chronically ill, or anywhere near their parole dates because all of our Kentucky prisons are overcrowded and there’s been very little done to prevent the spread of COVID-19 within those prisons."

One inmate's wife, Shannon Collett, is backing that up. She part of a "phone zap" last week, in which people blew up officials' phone lines to make demands for release.

"It's been really hard for me because I'm battling breast cancer and he has life-threatening medical issues also," Collett says. "My husband met all the requirements to get out, other than he still had a year and a half sentence."

Earlier in the pandemic, Gov. Andy Beshear did commute the sentences of nearly 2,000 inmates, to be released due to COVID-19. However, Kunkel argues, "The number that they released is not really a significant enough population, to reduce the spread."

The Department of Corrections (DOC) lists its COVID-19 procedures online, in a memo that states several things are happening, like:

SN1 received this response from the Department of Corrections late Monday afternoon, in response to the concerns inmates laid out.

The statement from spokesperson Katherine Williams read, "The Kentucky Department of Corrections (DOC) has taken, and will continue to take, aggressive steps to protect the safety and security of all staff and inmates incarcerated in Kentucky state prisons. DOC is in close collaboration with the Kentucky Department for Public Health, Justice and Public Safety Cabinet and the Governor’s office regarding mitigation and testing decisions at the onset of an outbreak at any of Kentucky’s 14 prisons that hold state inmates. DOC works diligently to minimize health risks and continues to follow the guidance from the CDC for Correctional and Detention Facilities.

Since the beginning of the pandemic, DOC has worked in consultation with the Department for Public Health to be able to test staff and inmates when a known exposure occurred or COVID-related symptoms were displayed. DOC is able to administer a COVID-19 test to any inmate who is displaying symptoms and/or has been exposed to the virus.

Any time there is an outbreak, the institution’s inmate population is separated based on the COVID-19 test results. The prison is separated into four distinct housing areas: 1) positive inmates, 2) negative inmates with direct exposure, 3) negative inmates with no exposure, and 4) medically vulnerable inmates. The separation is done in order to better manage and care for those inmates who have tested positive and to try and prevent the virus from spreading further. During an outbreak, medical staff go to each dormitory and check on the inmates individually. Medically vulnerable inmates are closely monitored by medical staff and checked regularly throughout the day.

DOC is not experiencing a shortage of cleaning supplies. All facilities have enhanced sanitization efforts using germicide and a bleach solution multiple times daily. Inmates are provided personal bottles that contain an approved germicidal cleaner. These can be refilled at any time in their residing dorms. Sanitation supplies are distributed twice a week to all areas of the institutions, and checks are done daily by staff to ensure that standards are being met. Additionally, there are foot baths and hand sanitizer stations located at the entrance of the institutions and every building. Staff and inmates have been instructed to utilize both before entering any building.

DOC has also increased access to hand sanitizer for staff and soap for inmates, while also educating on the CDC guidance for mitigating the spread of germs.

Cloth masks were originally provided to inmates in early April and have continued to be provided to ensure the inmates have a fresh one available to wear at all times. Masks are mandatory for all staff and inmates."

At this time, DOC’s state prisons are not overcapacity or overcrowded.

Currently, there are more than 7,700 inmate cases and 46 deaths. That's two more deaths since Spectrum News 1 last reported at the end of February. Gov. Beshear is planning to make an announcement regarding COVID-19 and prisons, in an update Tuesday at 4 p.m. EST.

Editor's Note: :  In the original story our reporter identified the group “Campaign to Fight Toxic Prisons” as a prison reform organization.  The organization actually identifies itself as a prison abolition group.