Protesters Reflect on Their Experiences During Summer Protests

LOUISVILLE, Ky. — Jefferson Square Park became the epicenter of the movement to call for justice for Breonna Taylor. She died on March 13, 2020, at the age of 26.

Hundreds of thousands of marchers took over downtown Louisville during the summer months. Curfews were set, people were hurt and arrested and at the heart of it, all protesters were heard.

One year later, we are speaking with four protesters who share their journey.

Night after night, the intense and sometimes shocking scenes caught on camera and broadcast live around the world unfolded on Louisville streets.

“It is lightweight traumatic to have to sift through all those memories to try to figure out which day to talk about because they weren't all good. They weren't all bad. Some days were graded. Some days both had good and bad,” said Carmen M. Jones, a 24-year-old protester.

Shaela Worsley is a protester from Richmond. She was inspired from the protests in Louisville, and went back home to raise awareness.

Jones was there on day one and is among the first to call Jefferson Square Park home. She has the scars to prove it.

“I remember one time we were standing under the helicopter and the helicopter was inches from us like it was pretty low to the ground, and they deployed the tear gas and I still got the chemical burn of my neck. from the tear gas and it bothers me every now and then like, because like, it'll never be washed out of my skin, you know what I mean,” Jones said.

Blu Lewis, 24, rendered first aid during the demonstrations. In the protests, Lewis said she helped at least 10 people from passing out in one afternoon.

“People having anxiety attacks. ambulances had to be called. I was a street medic so I’m rushing to everyone, I’m checking people’s vitals, I’m trying to calm people down, get people’s eyes from rolling to the back of their head you know,” Lewis said.

Shaela Worsley, 20, said she took off work to march for justice and went back to her hometown of Richmond to spread the same message of "no justice no peace.”

She added, “We have to fight so much harder just to be heard, so they can just even see us.”

By the end of September, Kentucky Attorney General Daniel Cameron released the much-awaited decision about charges in the death of Taylor. 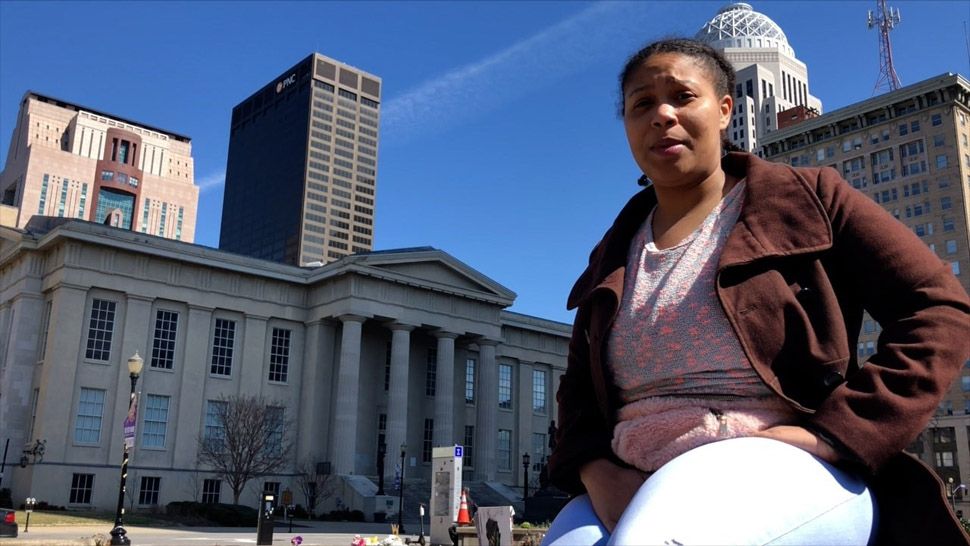 Blu Lewis was a street medic for the summer protests. She rendered aid to protesters during intense moments.

“Of wanton endangerment for wantonly placing the three individuals in apartment three in danger of serious physical injury or death,” Cameron said on September 23, 2020.

“Everyone was out here, you know, watching it on their phones and stuff and listening into, you know, see what the news was going to be. That hit home that that really made us like we physically felt that,” Lewis said.

“When they essentially said that concludes today, it was an absolute shock. That shock went to grief and sadness which immediately gave way to anger. It's one of those days that I'll never forget. I'll never forget that moment, that it felt crushing. It felt hurtful,” Findley said.

He said that moment reaffirmed his commitment to the fight for justice.

He remains an outspoken agent for change.

“Last year 2020 was about bringing a spotlight to the inequities in our criminal justice system here in Kentucky,” Findley said.

Findley’s message to his large following in Louisville is consistent.

For now, the chants continue and the work for these protesters will not stop.