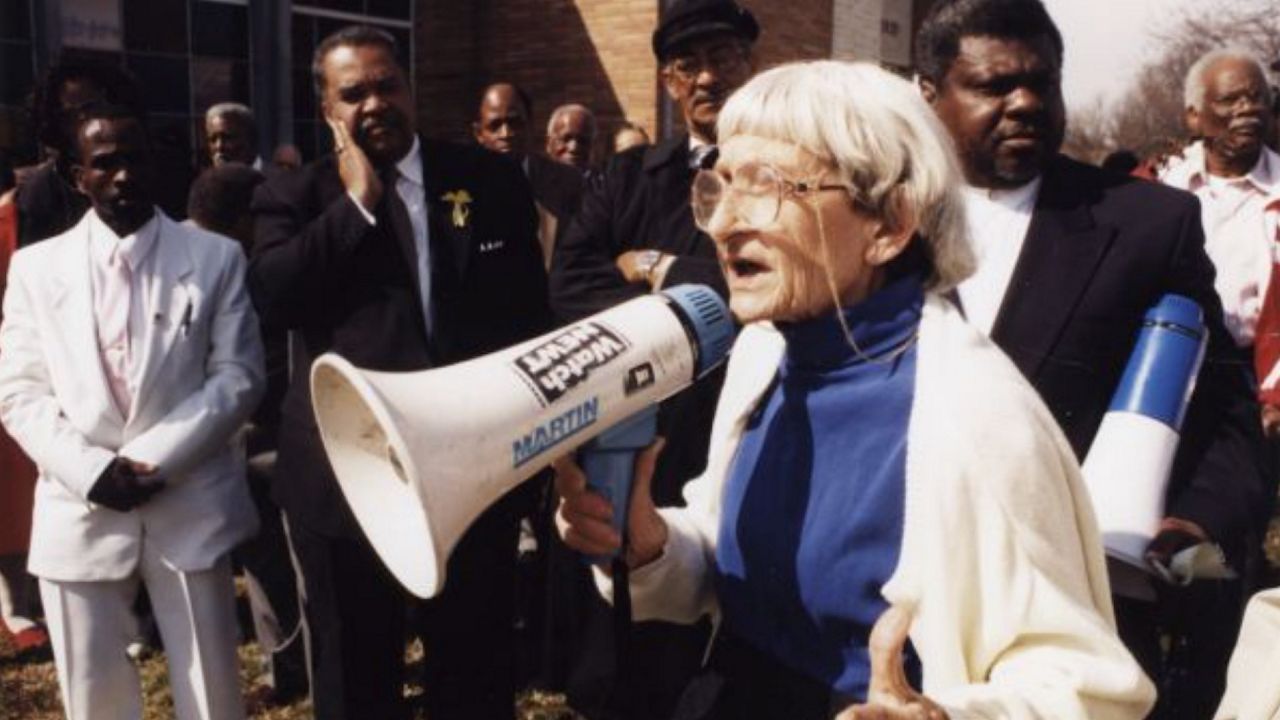 Civil rights activist Anne Braden speaks at a rally. Behind her is the Rev. Louis Coleman, who is also a local activist. (Credit: Wisconsin Historical Society)

LOUISVILLE, Ky. — Anne Braden was a Southern white woman ahead of her time who fought for civil rights for over 50 years.


“She wanted to bring white people together so white people could understand the struggle of Black people,” said Mattie Jones, a longtime civil rights activist based in Louisville, who calls Braden her best friend.

“Her strength. I remember till this day Anne’s strength,” Jones said.

Braden was born in Louisville on July 28, 1924, but she was raised in Alabama in a middle-class Southern family.

“And although her family wasn’t extreme by the standards of their day in any way, they were completely in line with what most white Southerners thought, you know, that was not her way ever again,” said Cate Fosl, who wrote Braden’s biography “Subversive Southerner” and founded the Anne Braden Institute for Social Justice Research at the University of Louisville.

Fosl said part of what drove Braden toward civil rights activism was when she came to Louisville in her early 20s to report for The Louisville Times.

“And being assigned to cover education and covering the Lyman Johnson suit to desegregate UK, and interviewing Lyman Johnson, and getting to know African-Americans as people,” Fosl said impacted Braden’s views.

At The Louisville Times, Anne met labor reporter Carl Braden, who she married in 1948. Fosl said there was alchemy to their relationship.

“He brought more the working class, labor, organized ordinary people fighting poverty consciousness, and she brought a very profound belief that the way to do that was to work on racism,” Fosl explained.

Already actively involved in civil rights for years, a pivotal moment came for the Bradens in 1954 when they were asked to buy a house in Shively, Ky., a newly developed white suburb, on behalf of the Wade family, a Black family.

According to a historical marker on the home’s street, Andrew and Charlotte Wade moved in on May 15, 1954, two days before the Supreme Court decided on Brown v. Board of Education, ruling that racial segregation of children in public schools was unconstitutional.

Neighbors burned a cross in the yard and six weeks later, the Wade’s house was dynamited. Fosl said the Bradens and five other white people who supported the Wades were arrested and charged with sedition, and Carl’s case went to trial.

“I mean, it looked like their lives were going to be crushed, so it was no small thing,” Fosl said.

The charges were eventually dropped, but the experience led Braden to write a memoir about that time titled “The Wall Between.” Fosl said the book unpacks the psychology of Southern white racism.

In 1963, when Martin Luther King Jr. wrote his “Letter from a Birmingham Jail” he praised six white writers, stating “Some…have written about our struggle in eloquent and prophetic terms.” One of the six writers named was Braden.

Fosl said King already knew Braden after she previously gave him a ride to Louisville, where his brother A.D. King was a minister, after a gathering for activists in Tennessee.

“And they talked, and he later said to Coretta Scott King, his wife, he’s like, ‘I never knew such a white woman existed. I could never imagine someone feeling that way,’” Fosl said.

In the 1970s, Braden co-founded the Kentucky Alliance Against Racist and Political Repression. It’s a social justice organization still active in Louisville today, and it has been very involved in the protests demanding justice for Breonna Taylor.

Jones said when she became a member of the Kentucky Alliance in the 1970s, she got to know who would become her best friend.

“And Anne began to take me under her wings, and that taught me an awful lot about working toward a better America,” Jones said.

In 1990, Braden received the American Civil Liberties Union’s (ACLU) first Roger Baldwin Medal of Liberty. The award is still given today to an organization or individual who demonstrates an exceptional commitment to international human rights advocacy.

Ending racism, war, and poverty is what Braden worked for until she passed away at 81 years old on March 6, 2006.

Jones said she saw the legacy that Braden leaves behind come to a high point during last year’s protests for Breonna Taylor.

“There we [saw] Black and white and rich, poor together, standing up for what is right. That is the legacy that Anne left behind.”

To learn about the full life Braden led, you can read Fosl’s biography on her, “Subversive Southerner,” or watch the documentary Anne Braden: Southern Patriot.