LOUISVILLE, Ky. — While the COVID-19 vaccine is now available to people aged 70 and older, the average person in Louisville’s West End doesn't even live that long. That's according to 2017 data from Louisville Metro Health, showing the average life expectancy is just over 69 years old.

That's a problem, for neighbors like State Representative Attica Scott (D-Louisville), who's written a letter of complaint to the state's health department secretary. Others agree that there should be better, more equitable access to the vaccine. 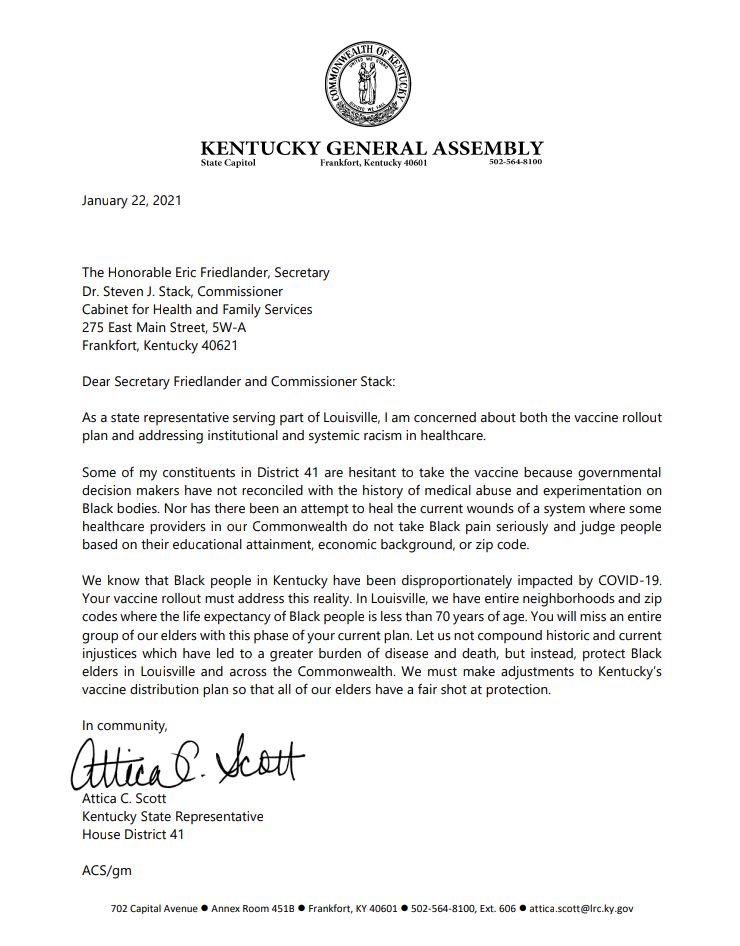 “I think trying to live to see 70 is, to me honestly, shooting for the stars in the generation that we’re in now, because lack of resources are affecting everybody," West End resident Eran Poole said.

Poole's priority now is getting her elderly grandfather vaccinated. The 85-year-old is on a wait list, she can only assume. She said after three weeks and registering eight times, she's frustrated. Demand for the shots is soaring.

"I do feel like our community is at the bottom, an afterthought sometimes. I do," Poole said.

Data from city leaders shown in Mayor Greg Fischer's COVID-19 briefing Tuesday revealed that most vaccinations are happening on the city's eastern areas; of vaccinations administered, 11% went to Black citizens, although Black Louisvillians make up 22% of the city's population.

For Poole, it's not instilling a sense of trust in the system.

"I think it really brings on an element of worry," she said.

There are vaccine clinics in West Louisville, such as Norton Healthcare's clinic at 18th and Broadway.

“One of the challenges with this vaccine is transporting it and making sure it’s in the appropriate freezers and that type of thing. And so it somewhat limits the locations but we were fortunate to be able to open that early on," Chief Medical Officer Dr. Steven Hester said.

But Dr. Hester said there's a plan in the works for vaccine events to be held at churches in the area, to "have some of their individuals scheduled."

Blair Butler, a Louisville resident who has successfully secured one of two doses for his 84-year-old mother, said technology is a barrier for many.

"There should be a certain amount of walk up available," Butler said. "Some of the older people are just not going to live by technology the way I’m used to."

Health Cabinet Secretary Eric Friedlander’s office told Spectrum News 1 he did receive the letter from Rep. Scott, and listened to her concerns over a Zoom meeting.