"My right side just went limp, and I started drooling. I remember just being in so much pain," Brooks said.

She was rushed to the hospital where she later learned the adjustment caused a vertebral artery dissection, which sparked a stroke. At just 35 years old, she was fighting for her life. 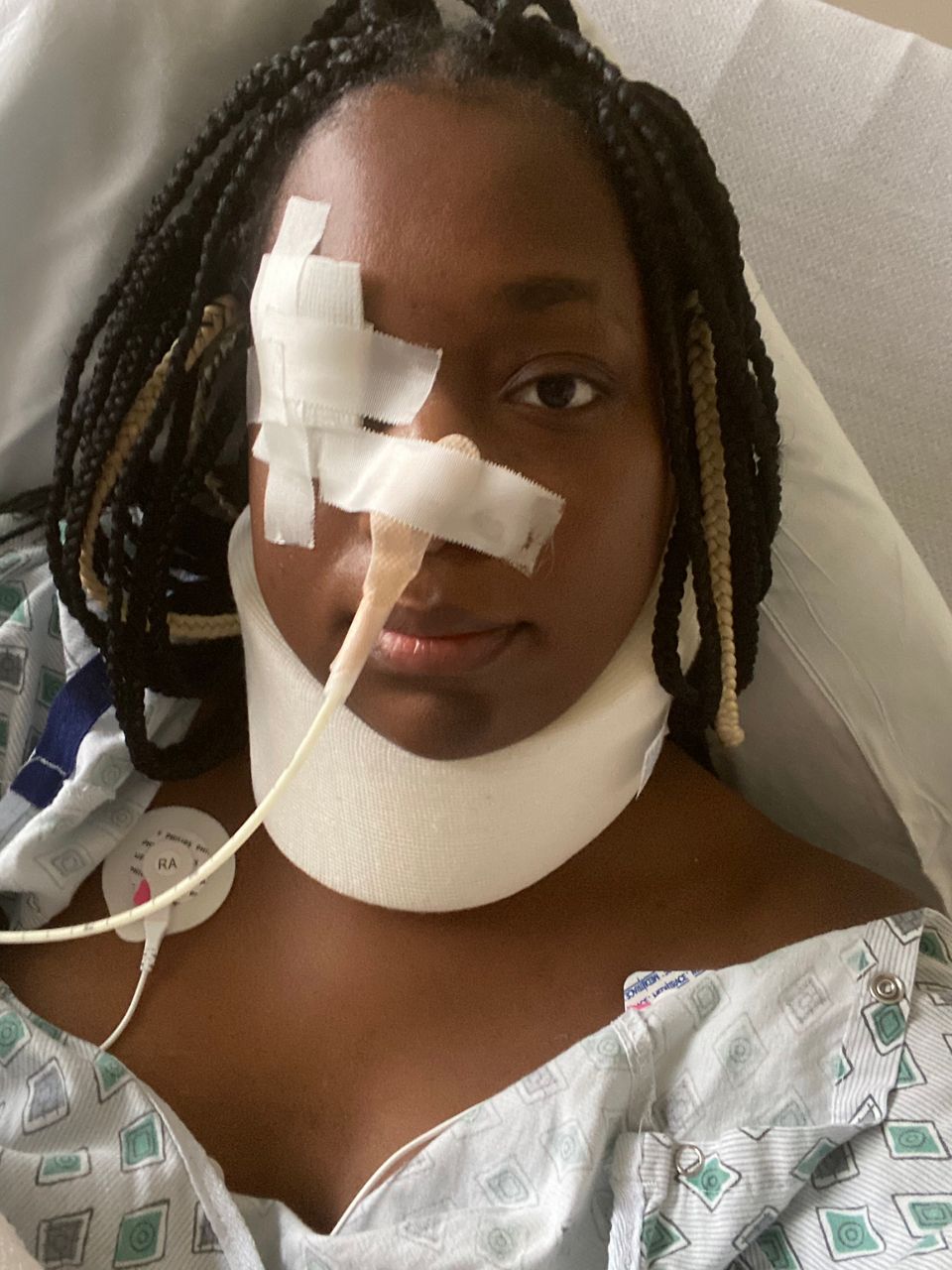 "I remember just trying to get the words out to tell him to tell my kids I love them because I thought I was going to die in there," Brooks said.

Dr. Michael Haboubi, a neurologist with UofL Health, said it's a good thing she went to the hospital for help right away. Receiving a clot-buster as soon as she did is likely why she survived to tell her story today.

Chiropractic adjustments causing strokes are rare, according to Haboubi.

"Yeah, we do see it. It is a rare complication. It occurs in about 1 in ever 20,000 spinal manipulations. Just like with everything in medicine, there are risks of doing something and not doing something. For people who are having pain in their neck or shoulders, having a manipulation can bring them pain relief, but, at the same time, there is a small risk of having a stroke while doing that," Haboubi said.

While vertebral artery dissection is a rare cause of stroke overall, a study published by the National Center for Biotechnology Information says it is one of the more common causes of stroke in patients under 45 years old.

While Brooks began noticing something was wrong right away, Haboubi said symptoms can appear up to a month later.

"Most people who have a dissection in the vertebral artery are going to have head or neck pain. That's the first thing they usually notice," Haboubi said.

It can happen not just from a chiropractor, but also from a car crash, sports accident, or anything else causing a lot of force on the neck. 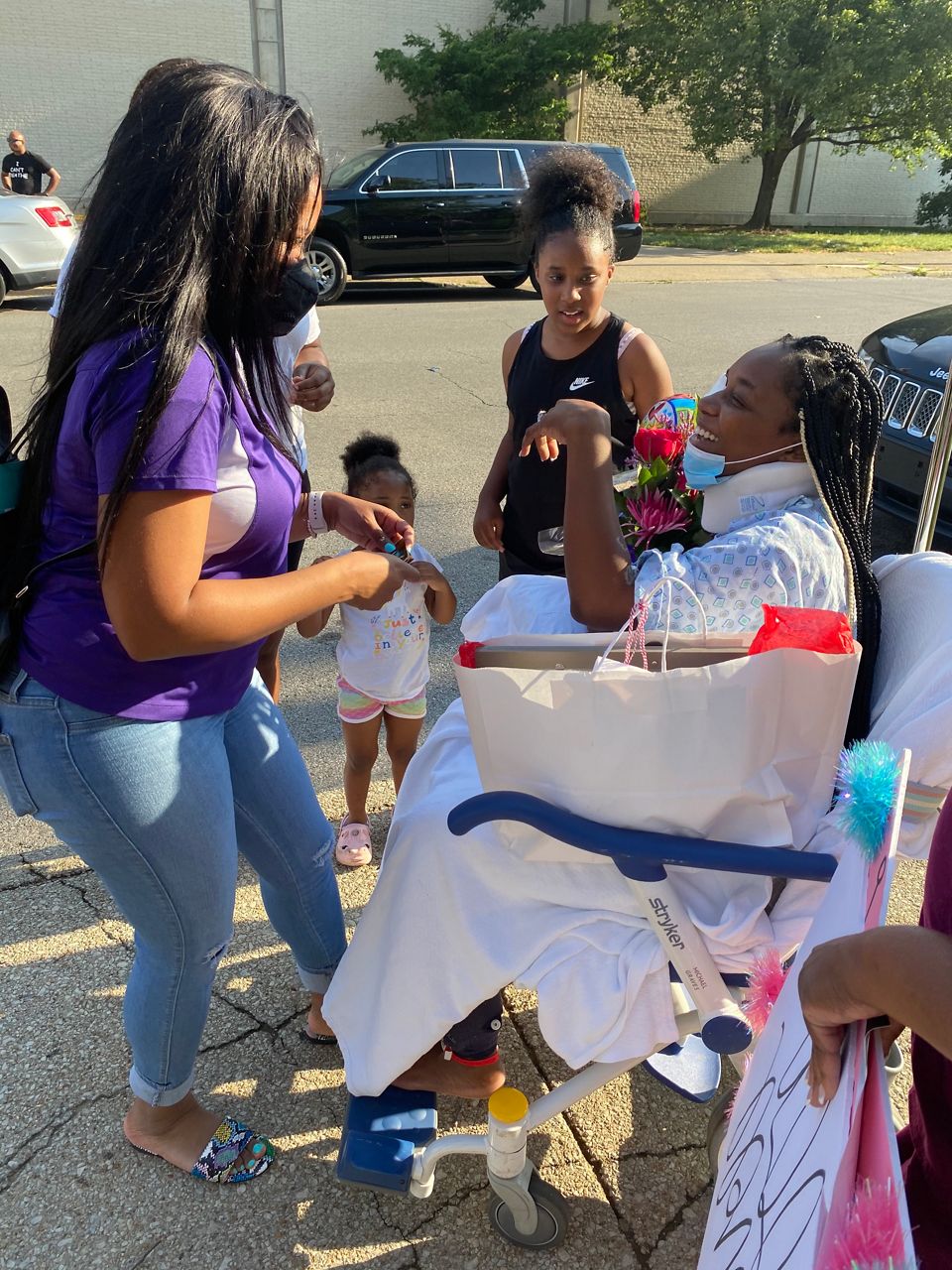 Friends and family surprised Brooks outside the hospital.COURTESY KATIE BROOKS

Brooks said she was unaware of this risk when she went to the chiropractor in June.

"I wouldn't go back to a chiropractor. That's for sure," Brooks said.

She wouldn't get into what is next for her as far as pending litigation goes, but did explain that this stroke changed her life completely. While in the hospital, she had to relearn how to walk. Now, she uses her walker to get around.

"It might not be the best walking. I may crash into stuff, but at least I am walking," Brooks said.

She had to spend a month in the hospital away from her three kids.

“It was hard for the kids not being able to see me,” Brooks said.

While she was in the hospital, there was one day that she was able to see them from afar outside. They came by with posters, flowers, and balloons.

"I looked up and they were all cheering. That made me feel a lot better,” Brooks said.

Now that she's back home, the roles are reversed as her kids help her with tasks she can no longer do.

"My son has turned into my hairdresser, my caregiver and my babysitter," Brooks said. "I am so thankful my kids are able to do that and I have them at least to be with me, but I am the mother. I am used to being the caregiver. When the roles are reversed, you just kind of feel helpless."

Brooks said on a scale of one to 10, her pain level most days is a 15. She has a lot of neurological pains, but the medicine she takes to help with that makes her tired, making it hard to get anything done.

Her days are now filled with doctor's visits and physical therapy sessions in an attempt to improve her health. With all of those extra appointments and not feeling well, it's hard for her to give the business she owns much-needed attention.

“I’ve been a caregiver for veterans for seven years. That’s the business I had for a long time. I did a lot to build that business. I put a lot into being there for my guys. I love being a caregiver, but I can’t be a caregiver anymore at that capacity because of my conditions," Brooks said.

She said she does not know when her health will be good enough to go back to being the primary caregiver there. After six months of not being able to work, she is also worried about her family's financial situation.

While it has been a challenge, to say the least, Brooks is surrounded by people she loves and praying for a continued recovery.

“I am thankful at the same time that I am here because I didn’t think I’d be here. My kids could be spending this Christmas without their mom, but I am here, so I am thankful for that,” Brooks said.