RV There Yet? A New Tourist Park is Motoring into Woodford County

"The RV resort totally took us by surprise. I was approached about a month ago and was a little bit skeptical at first, to be honest with you, but as I looked at the plans, I realized this could be a great addition to our city and to our county," said Grayson Vandegrift, mayor of Midway, Ky.

The Bluegrass RV Resort Park, currently in the planning stage, would be located on the Mitchell farm land at the northwest corner of the I-64 interchange at Kentucky Highway 341 near in Woodford County. 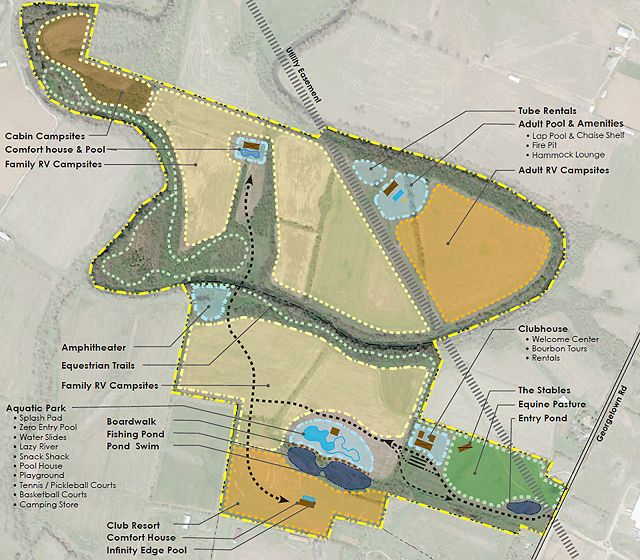 The Bluegrass RV Resort Park is still in the planning phases.

"Having an RV resort in Woodford County really opens up a whole new spectrum to travel," said Emily Downey, president and CEO of Woodford County Chamber of Commerce. "We are able to accommodate folks who are passing through, but also a different type of category of people who want to come, have their RVs."

The project also hopes to attract a new distillery to Midway that would reside on an adjacent piece of land.

"We've been trying to get a distillery in Midway for quite some time so that's a very exciting part," said Vendegrift. "The RV resort park we're getting used to that day ourselves, but when you look at it, it's something that really is a great use of the land and it gives people a chance who really don't get to go back there and see it and enjoy things like Elkhorn Creek, a chance to go and see it."

City leaders hope the park will include other amenities like an aquatic park with a lazy river, an ampitheater, and a country store. However, the RV park and distillery both have many rounds of discussion and public input before moving forward.

"It opens up a whole new demographic that can come and enjoy Midway's amenities, the small-town charm that they have preserved. It will naturally bring people into downtown where we have so many shops and great local restaurants. Just so much to do, the local winery," said Downey. "It'll make them experience all of what Midway and Woodward County has to offer."

If all goes as planned, The Bluegrass RV resort and a new distillery could become a reality and open to the public by mid to late 2021.