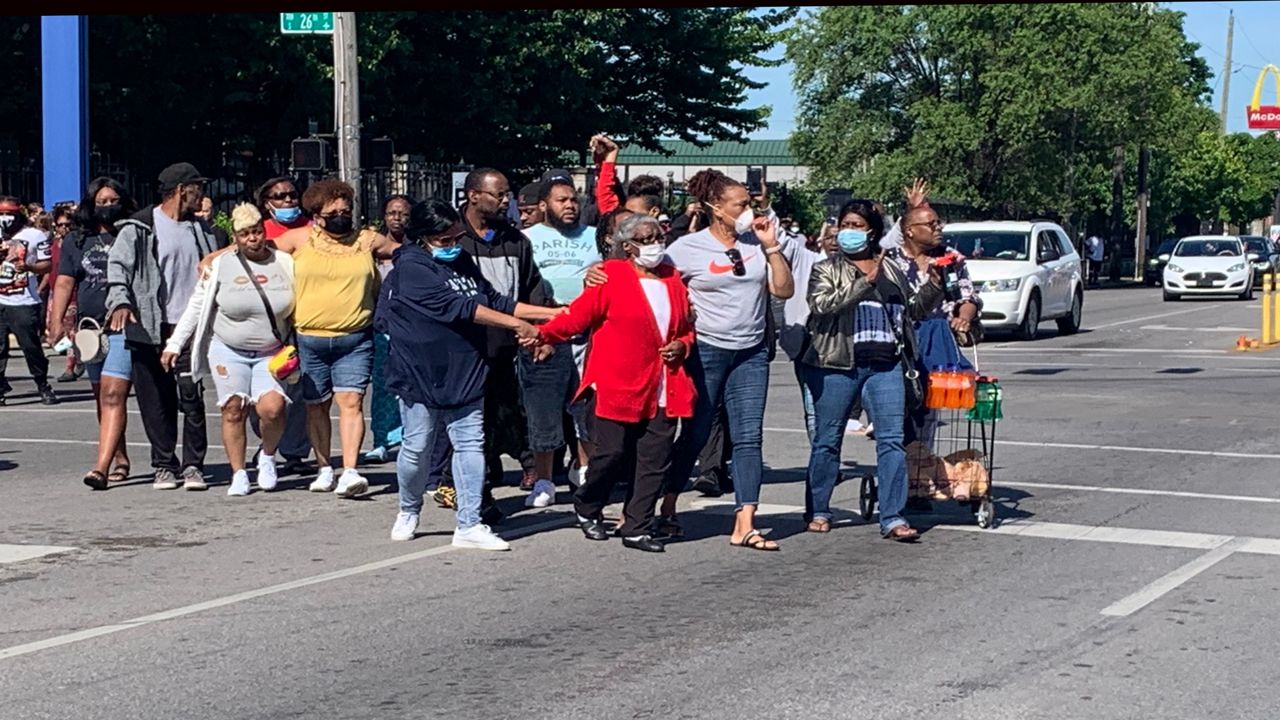 Police and spectators at 26th & Broadway scene of the shooting

LOUISVILLE, Ky. — One person is dead after being shot during the protests in Louisville.

Louisville Metro Police (LMPD) confirm that a man was shot and killed when LMPD and the National Guard attemped to break up a large gathering of people outside of Dino's Food Mart at 26th and Broadway in Louisville.

Chief Steve Conrad issued this statement saying, "Around 12:15 a.m., LMPD and National Guard units, who have been working to assist LMPD with the protest, were sent to Dino’s Foodmart at 26th and Broadway to clear a large crowd. LMPD had been monitoring large crowds all night, and this was one of the last ones.

As they began work to clear the lot, shots were fired at the officers and Guard.  Both LMPD and National Guard members returned fire.

LMPD will be interviewing several persons of interest and is collecting body cam video from the incident. There are many hours of video from many officers to review.

LMPD will hold a press conference later this afternoon to share a further update, and whatever video is available to share."

Louisville mayor Greg Fischer (D) went to the scene of the shooting and met with the mother of the man shot, David McAtee.  He said, "My deepest, deepest condolences to the family and friends of David McAtee, who was killed in an incident today at 26th and Broadway.

I spoke this moring with his mother, Miss Odessa, and was so moved that I went to be with her for a moment to mourn and grieve.

I had spoken earlier today with Breonna Taylor's mother, who was on her way to Frankfort, to share in Gov. Beshear's call for people to be peaceful in their protests.

I am incredibly humbled and heartend by the grace of these two mothers, who even in the darkness of their pain are reaching out to protect our city and our people.

Obviously there are many questions about the incident. I am committed to getting all the answers out as quickly as possible."

Governor Andy Beshear held a news conference and was joined by the mother of Breonna Taylor, Tamika Palmer. Palmer, emotionally spoke to viewers and said, "Breonna loved life, she respected life. We can't get justice with violence. It doesn't help her and it doesn't help the world we live in. I just demand justice for Breonna."

Beshear has called for the release of body camera footage from the shooting saying the people of Kentucky deserve to see what happened. He said we must be transparent in these cases.

There will be an independent investigation of the shooting by the Kentucky State Police.

"I'm doing a lot of things as governor that I've never done before. Trying to tell people that you care when you don't share their experience or have gone through their pain - I know it is hard for people to believe. But all I can say is I want to be a partner in that change."