State of Incarceration: What's Going on Behind Bars

LOUISVILLE, Ky. - Jails and prisons in Kentucky have growing inmate populations. The Bluegrass puts people behind bars at a rate that rivals whole countries. It outpaces Canada and the United Kingdom, according to the Prison Policy Initiative.

The people behind bars are mothers, fathers, sons, and daughters – many of whom will come back into society one day, changed – for the better or worse.

What kind of punishment are we paying for? Spectrum News 1 wants to know What’s going on behind bars.

Not only is there a rise in incarcerated women, but there are also more African Americans being incarcerated.

However, at least one attorney says there’s another problem going on that should be classified as the “civil rights issue of our time.” That’s the bail system.

Jails are crowded with people who are suspects, awaiting trial. Many of them would be released to wait outside of jail, if only they could afford to pay bail. That’s where The Bail Project comes in.

Former inmate Demontez Campbell names The Bail Project when he counts his blessings. He spent six months in jail on domestic violence charges, and then took a plea deal so he could be released.

Attorney Ted Shouse argues that many people will plead guilty quickly in the first place when faced with the alternative option of waiting longer in a jail cell.

“Jail is a miserable place,” Shouse says, “…believe me, you’d plead guilty to almost anything to get out of jail.”

Campbell says that the scenario was true for him. Then, after his release, he missed a court appearance and there was a warrant out for his arrest again. This time, he’d heard about The Bail Project.

Shameka Parrish-Wright, who works with the nonprofit, says her motto is “poverty is not a crime.”

Parrish-Wright hopes The Bail System will end altogether eventually, hoping there can be other ways to hold people to return to court for trial and keep them lawful while they wait. She argues that more money is spent to house people while they wait in jail than is being collected from bail.

The Bail Project is open to inmates across the state. In Louisville, the Louisville Metro Department of Corrections (LMDC) says The Bail Project has saved taxpayers money. For example, an inmate’s average length of stay in jail is 23 days as LMDC Assistant Director Steve Durham says. He says the cost runs between $2,140 and $8,279 depending on medical needs. So, if The Bail Project takes 13 days off that inmate’s stay, that’s at least $1,040 saved for one inmate.

As of mid-October 2019, the Department of Corrections (DOC) counted 23,987 inmates total in Kentucky; that population is made up of roughly equal parts jail inmates and prison inmates.The types of crimes the people had committed, according to DOC’s records, were mostly those classified as property, drug, and “other public” charges; it’s reported the charges were made up 20% property crimes, 16% drug crimes, and 28% “other public crimes.” Violent crimes accounted for only 6% of the charges. 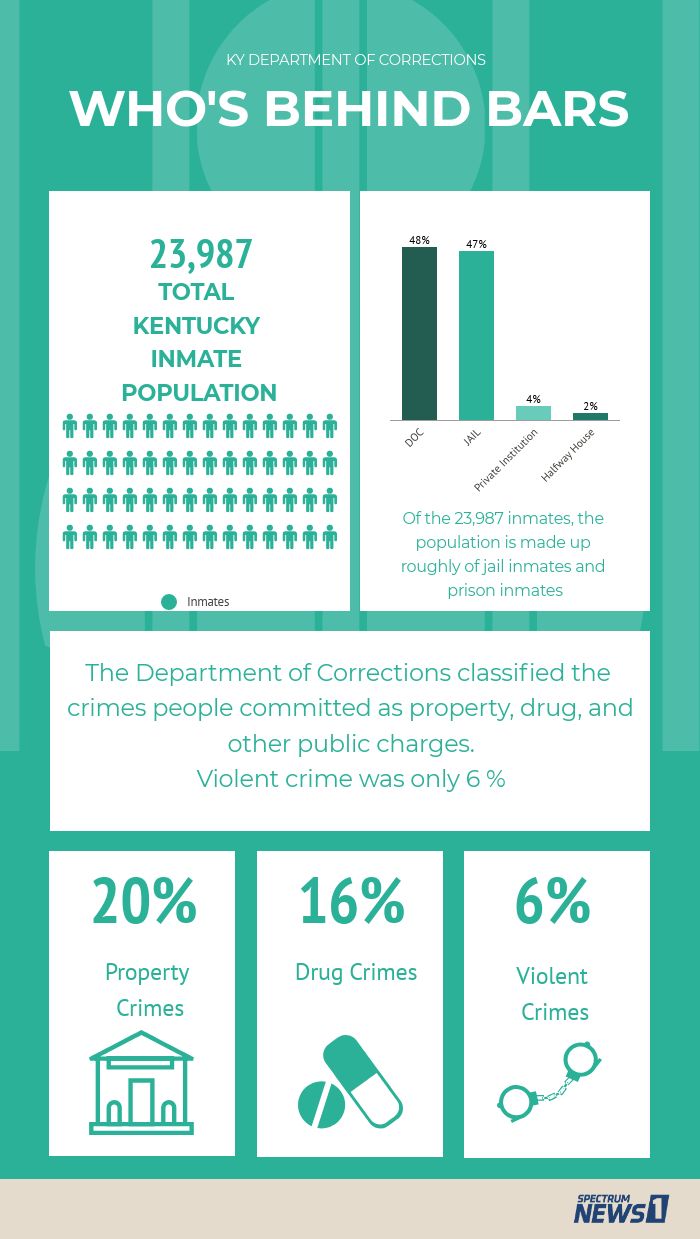 THE RISE OF INCARCERATED WOMEN

The cycle starts with jail bookings. Some 2.5 Million women are booked in jails across the country each year, according to the Vera Institute of Justice. But, how does that look for Kentucky? Vera says that in 2015, the average number of women in jail in the Bluegrass nearly tripled the national average when you compare 255 female inmates to 93.

As of October this year, DOC data showed women were 13% of their population; that means 3,176 women in jail, prison, a halfway house or private institution. That’s unsettling, to say the least, for Alaina Combs.

Combs is a former inmate who has become an advocate for prison reform. She works with people recovering and rehabilitating from drug addiction, many of whom were incarcerated at some point in their lives. She argues that when women are incarcerated, many people suffer, including their children.

When mothers lose custody of their kids, they tell Spectrum News 1 that can cause a real lack of motivation and can work against the road to rehab.

Amanda Heineman successfully reached her goal of sobriety and regained custody of three daughters, after spending time in and out of jail in northern Kentucky. She did time for drug charges. “Finally that last time, it was enough for me,” she remembers being addicted to meth. 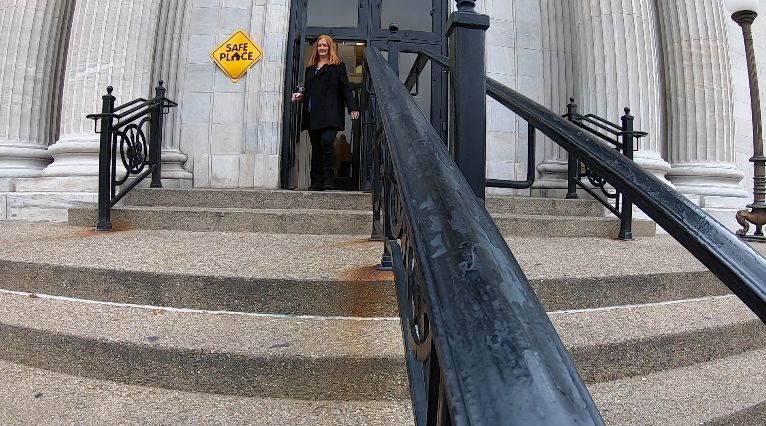 Heineman shares her success story to show recovery is possible and to point out the hardships that mothers and their children endure due to incarceration.

"It was heartbreaking. My life revolves around [my children], and you know I didn't wake up one day and be like 'I don't want to be a mom anymore.' It was really tough,” says Heineman, “you know, you feel worthless and like you've let 'em down, and it just hurts."

Her daughters were 4, 6, and 7 years old at the time. They went to live with family and visited Heineman when she was allowed to see them, in jail. They’ve all been reunited for about three years now, but it’s still tough.

"When I first got them back, it was very rough. My oldest daughter has experienced the most trauma from everything that has happened and I would say it's probably affected her the worst. The first year, she would yell and cuss and hit and... it's been a hard road,” Heineman explains.

She is one who believes long-term separation from a mother who’s recovering from addiction should not be the decision handed down so swiftly.

"Children love their mother. No matter what my mother has done, I love her. That's all my children wanted, was to be back with their mom…and thank God I was able to get help when I needed and everybody didn't give up on me and just throw me away,” Heineman adds.

The term “throwaway moms” is mentioned in a study conducted at the University of Kentucky’s College of Social Work in 2007.

Social workers like Professor Chris Flaherty conducted interviews with several incarcerated mothers and found some underlying themes they all shared. One of those is a stigma- and gender perceptions they call unfair.

Flaherty also calls to attention, a policy that can work against reunification between a mother and her kids. The Adoption and Safe Family Act (ASFA) at the federal level says that moms can lose their rights to their kids if the children are not in their custody for 15 months of the last 22; in Kentucky, the average prison sentence for a woman in Kentucky was 18 months, at the time of the study.

“The policy puts these parents in a bind as far as being able to maintain custody and be reunited with their children,” says Flaherty, “is that always the answer when we have incarcerated moms, to take their children away, place them in foster care or even with relative placement? Many times these women come from places where their parents or extended relatives face challenges or issues.”

THE ROLE OF DRUGS

What’s to blame for the rise of incarceration? Answers vary, but The Sentencing Project says drug use accounts for some of it.

Addiction treatment behind bars varies, too, from facility to facility in Kentucky. There are still jails and prisons without the medically-assisted forms of treatment for users.

There are 12 substance abuse programs in nine prisons, according to the DOC. Medicine for withdrawal and to reduce cravings is available at all 12 prisons, in the form of Vivitrol. However, other medications doctors recommend for treatment, Methadone, and Buprenorphine, are only given to pregnant women.

"National numbers indicate that 70% of that population is in need of some form of drug treatment. So, can we provide that level of treatment? We simply can’t do it. The taxpayer could not afford that. So we try to prioritize. We try to find those most in need,” Secretary Tilley says.

Even more, jails lack treatment. Of the 76 jails, 21 have Vivitrol, one has Buprenorphine, and none have Methadone. 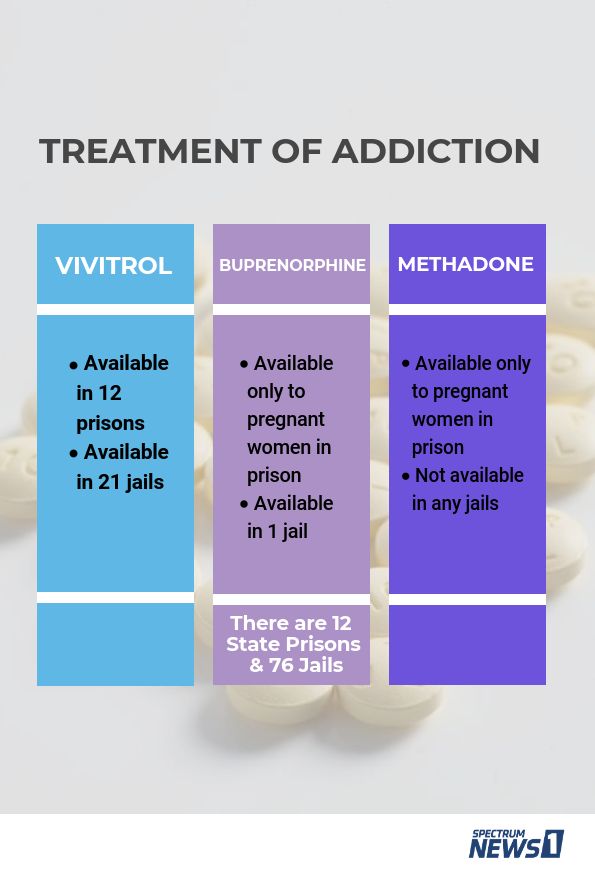 On the University of Louisville’s campus, Timara Tyree studies to become a social worker.  She draws on her real-life experience to work her day job and reflects on the time she spent behind bars, as she helps inmates recover from addiction.

“Trying to even see a doctor in jail is pretty hard,” Tyree says. “A lot of the [corrections officers], I understand their job is pretty tough you know they do deal with some of the worst of the worst [people], but it has hardened them some.”

Tyree was formerly an inmate herself, who spent more than a year across several jails in Kentucky, on drug charges. She thanks a substance abuse program in the Hardin County Detention Center for her sobriety and rehabilitation. That’s why she’s advocating for all types of treatments to be made available to inmates.

Speaking generally from her own experience, she says: “what they do with someone detoxing is,

“and they leave the lights on 24 hours a day.” So, Tyree wants better.

“I think that treatment needs to be offered at every facility that holds any kind of state inmates. I mean, if we want to truly rehabilitate people, and set them up for success re-entering society, why would we not give them the tools and resources they need to do that?”

DOC addiction services staff say jails should be the frontlines for treatment behind bars in Kentucky.

“One would like to think that by the time they reach an institution, they have detox,” says Sarah Johnson. “Now, we’re not naive enough to think that there’s not contraband on the yards and people don’t use on the yards. But I would say that the need is larger at our jails.”

Some problems persist, even after the punishment behind bars ends.

One Louisville woman and criminal justice reform advocate are fighting for more freedoms for those who have past felony convictions. Former inmate, Alaina Combs, recently had Governor Matt Bevin restore her right to vote. She cast a ballot for the first time ever, and it an emotional experience.

Combs was a mix of emotions as she left her home on Election Day to head to her precinct, “I was pretty nervous.” 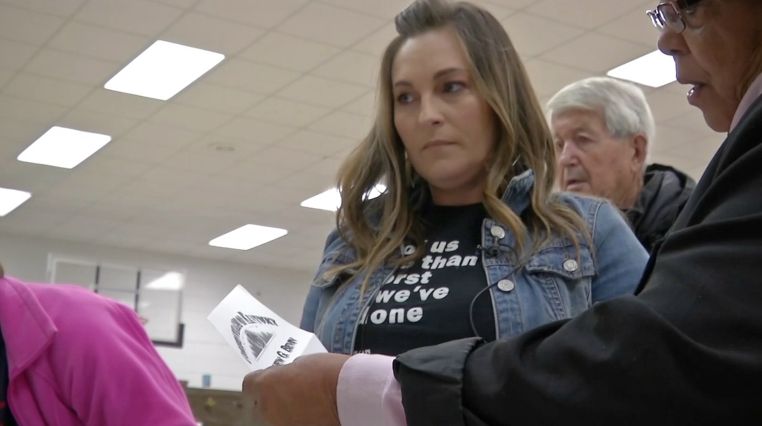 Unfortunately, it would not prove to be the happy experience she’d hoped it would.

Although she was listed on the book to vote at the precinct, in a moment of confusion, a staffer approached her and asked to see further proof that she had the right to be there and had been cleared to vote.

Combs produced the certificate from the governor and carried on to cast her ballot. However, the damage to her pride had been done.

“When I got in there, I still was kind of made to feel not welcome and that I was doing something wrong,” she explained.

There are some 312,000 people who still have not had their rights to vote restored, after being charged with felonies. While Combs hopes they can someday vote, she also wants the stigma she felt at the precinct to subside.

“We can stop making people prove themselves so much, and so when someone goes through the proper channels and proper process, we shouldn’t question whether or not they’re supposed to be here,” Combs said.

University of Cincinnati Criminal Justice Professor John Wright has studied trends in prisons and jails in Kentucky and has testified before lawmakers on what to do about overcrowding.

“They are dealing with substantial overcrowding which brings with it health concerns, safety concerns for both the inmates and staff, as well as cost concerns. Some of which could be alleviated if the state expanded capacity at the prison level,” Wright says. 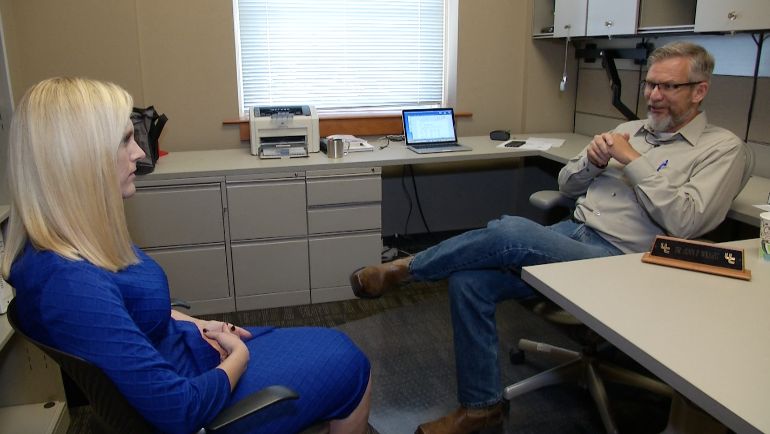 There’s a multitude of other reforms that have been suggested, such as lessening the consequences for certain drug charges, like a possession.

Others hope for more peer-based support reentry programs, to help figure out social security, and navigate things like getting a driver’s license and health insurance, and mental health help.