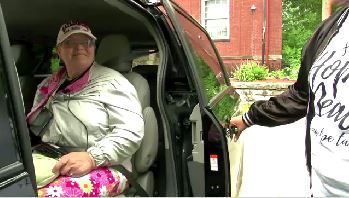 LOUISVILLE, Ky.-- There are several areas of Louisville known to be food deserts. These are neighborhoods where residents don't have access to healthy and often times affordable food options. So, the One Church group in Old Louisville has started a free ride service that shuttles people to grocery stores. It's called 'The Hope Buss.'

The passengers who took to the service on Saturday are some of those who not only live in food deserts, but also do not drive themselves. They met at the Kling Center in Old Louisville, and took the free ride to Walmart. The women in the rented van said it's more convenient for them than to catch a bus.

“When I have to catch a bus it takes two- sometimes three buses," said Terrie Robinson. "I have to wait an hour for a bus- or half-an-hour or so- you know and when by the time you get home you're so tired you can't do anything," Robinson said.

The founders of the shuttle service are Stachelle Bussey and Angel Todd. They've found it can also be more affordable to shop at a superstore or more traditional grocery store, than at the convenient stores that many residents have come to rely on in food deserts.

“Convenient stores are not so convenient for people’s pockets, and so to hear people with the stories of… 'now I can- now what I have, I’ve been able to buy in bulk'," Bussey says meets the purpose of her plan.

“Living in food deserts and the lack of access to things is nothing new for our city. We’ve talked about this for a very long time. There are organizations and some folks that are doing really good things around it, but for me I was like ‘what could we do?’” adds Todd.