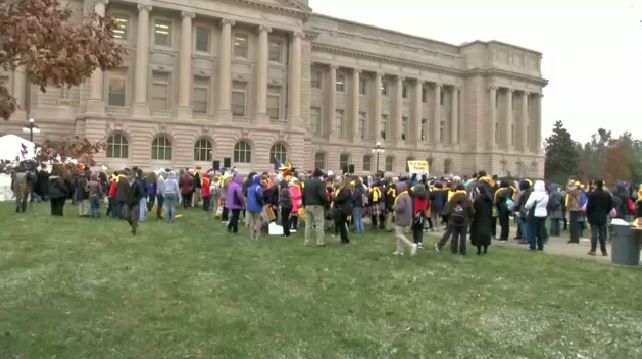 FRANKFORT---Braving cold and even snow, about a hundred people came to the Capitol to show their support for School Choice legislation.

Some took the stage to explain why they support school choice tax credits. One mom said, "Until out kids felt safe, they couldn't fully open up and learn. School choice has allowed our kiddos the opportunity to attend a school they feel safe and loved."

Senator Ralph Alvarado said his family suffered because school choice wasn't an option for him. The Republican from Winchester said, "I was first enrolled in a public school when I was a young kid. Spent a couple years there, and my parents quickly realized that this wasn't the best fit for my education, that they wanted me to have. They had to make some tough decisions financially. They weren't wealthy people, but they wanted me to receive a Christian education. They struggled, and they bypassed a lot of the luxuries a lot of people would normally have to make sure I could get that education. They mortgaged on their house and they borrowed money to make sure I could get that education."

Alvarado said that's why he is once again sponsoring a bill for school choice.

The details are still being figured out, but the basic idea of all school choice bills is that people or businesses will get a tax credit when they donate to a group that then provides free admission for middle and low-income students to go to private school for free.

Republican floor leader  Representative John "Bam" Carney says he is also planning to file a bill related to school choice. Explaining how it will would, Carney said "The bill is capped at 25 million dollars, so if companies want to contribute that, they get a, basically a tax credit for that, but that's the basic concept, try to help more families to afford an education of choice if they choose to."

School choice has a lot of supporters, including the United States Secretary of Education, Betsy Devoss.

But opponents say, school choice isn't as great as it might seem on the surface.

"Folks can actually make money off of donations to these organizations and the way that works is that with a very, very generous state tax credit, we've seen proposals that give people like 90 cents to 97 cents back on the dollar that they donate, so that they have that and then you've got these federal tax breaks, tax benefits for charitable deductions that people can stack on top of that state benefit and make money," explained Anna Baumann. Baumann serves as a senior policy advisor for the Kentucky Center for Economic Policy.

Neither bill has been filed yet, but Carney says he expects for his bill to limit double dipping like that.

However, Baumann says people can also make money by donating stocks. She explained, "Typically when people sell stocks they have to pay taxes on the appreciation of value, capital gains. But when you donate a stock to a scholarship granting organization under this proposal you wouldn't have to pay those capital gains taxes. So you'd get 100 percent of your donation back through your state tax credit and then your federal charitable donation to make up the difference, but you could also make money off of this other loophole."

The intent of school choice is to give low-income children a chance to go to private school. Baumann says the way previous years' bills have been written, it would actually help more middle income people. "What ends up happening is that affluent families who would already send their kids to private schools, maybe not even affluent, but certainly well above middle class in the way Kentucky's bill is written, can use these scholarships, because then folks who have already had a scholarship in the past, their siblings get priority, even if the family income has grown over time."

She also worries what this will mean for public school funding. From 2008 to 2017, Kentucky cut a larger percentage of educational funding than all but two states.

Carney says it shouldn't impact public schools. He explained, "The only effect it would have on a traditional school district is if you had a student that would leave the school district there to attend a school choice then they would not receive the SEEK allotment for that child. But one could argue those monies are dedicated to the child so that doesn't really negatively impact the school district."

He says he understands schools also have fixed costs but says bottom line, "children should be able to attend the school of their choice."

Carney says he has bipartisan support for school choice, and as public education continues to be a major issue in the legislature this is sure to be a controversial issue during the coming session.