This story is the second installment of a three-part Exploring Your Health episode delving into the science of pain and the latest methods of treatment. All three parts are available now:

Harmon Clarke’s intestines are lined with ulcers; he has Crohn’s disease. He says he’s in pain, almost daily.

“It's a sharp cramping, but it comes in waves. For a few minutes I'll just be hunched over, not even able to move or focus,” said Clarke.

Chronic pain had his life in a vise. Clarke says his choices were: live a life of debilitating pain or one of addiction.

“When they prescribed Oxycodone they didn't tell me it was any different than Tylenol or Vicodin. I just figured, well, this helped my pain and when I'm out of pain I'll stop taking it. But that definitely wasn’t the case,” said Clarke. “After trying for years to stop taking them, I was just unable. I got to the point where honestly I didn't want to live.”

After a surgery at Cedars Sinai Medical Center in 2018, to clear a bacterial infection in his intestines, he was given a lifeline. “I'll never forget it, because those nights, especially at hospitals, it's really challenging to sleep and you can hear and feel the pain around you. I mean, there's code blues, people are literally dying.”

Cedars Sinai’s Brennan Spiegel offered Clarke a virtual reality headset. It was part of a clinical trial Spiegel was leading with software company AppliedVR and the hospital’s Center for Outcomes Research and Education (CS- CORE), which he directs. 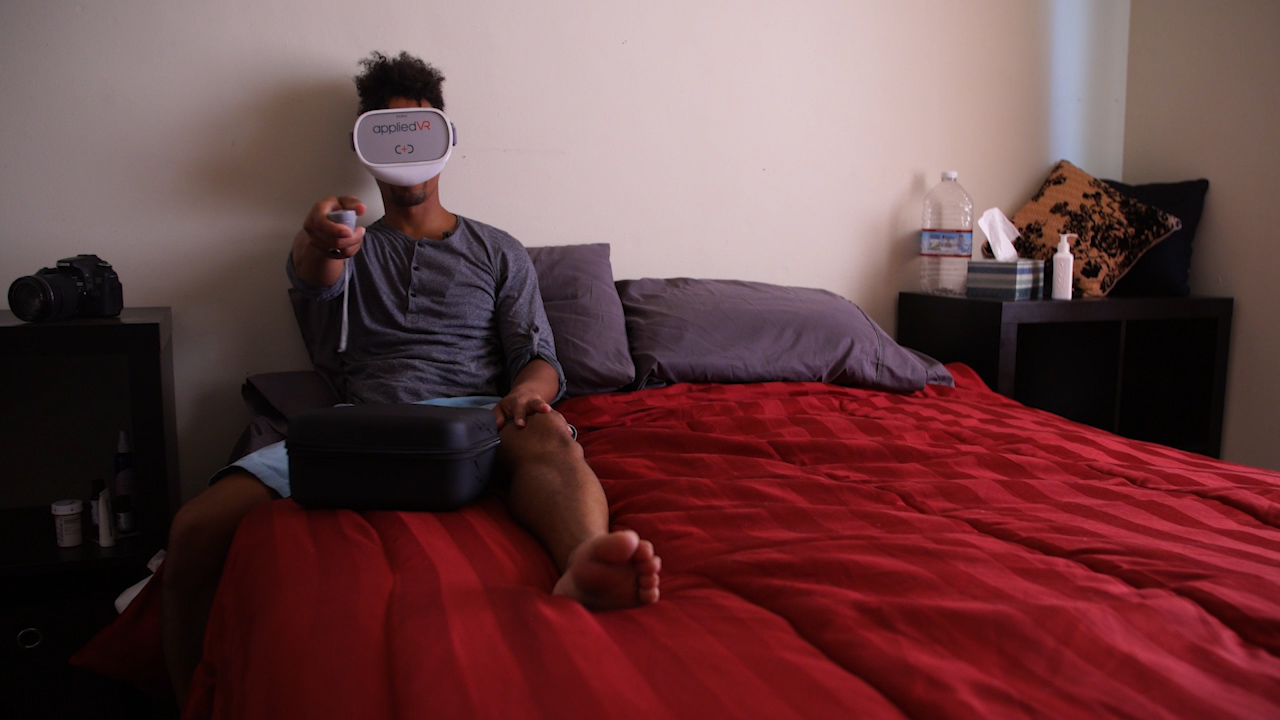 “I just happened to be there at the right place at the right time,” said Clarke.  He put on the virtual reality headset while in his bed and chose to visit Yosemite. “And I remember seeing the mountains and the waterfalls, and just looking in this full 360 degree panoramic view. It felt like I wasn't at the hospital anymore.  I just remember like this ecstasy coming over my body, just like I could feel the serotonin and endorphins releasing and just giving me that free feeling that I hadn't felt in so long.”

Virtual reality is not a new technology, but using it to treat pain is relatively novel. Spiegel’s goal is to prove, definitively, whether VR is a viable non-addictive treatment alternative.

Spiegel’s work is part of a nationwide effort to reduce the need for prescription pain medication, specifically addictive opioids. According to a Washington Post analysis of data from the Drug Enforcement Administration, over 76 billion pain pills were doled out between 2006 and 2012. Compare that to the 500 million doses of morphine given during the same period, according to the report.

This surge of legal pain pills helped fuel the growing opioid epidemic, which according to the Centers for Disease Control has claimed nearly 702,000 lives over a 17-year period. In Kentucky alone, nearly two billion prescription pain pills were supplied to the state during that seven year period.

“We've done a bunch of studies that suggest that it really helps reduce pain not just when people are in the VR, but even after they come out of the VR, some people say they still don't have as much pain and don't require as much pain meds. So, it's almost like they've rebooted their brain a little bit,” said Spiegel.

Studies show Virtual Reality is effective at treating acute pain - like post-surgery with Clarke, cleaning burn wounds or even childbirth. Spiegel’s study found a 52 percent reduction in pain symptoms. He said it works because of the so-called Gate Control Theory.

“If you stick your finger on a pin, the pain goes right up a nerve and it goes into your spinal cord, but then, really importantly, there's a handoff. So, that goes from one nerve to a second nerve and there's like a weigh station there,” said Spiegel. That weigh station opens a so-called gate, allowing the pain signal to travel up the spinal cord, into the brain, where we register the pain as an “ouch.”

Spiegel says VR distracts the brain, changing the perception of time. This allows the brain to relax, which triggers signals that release natural pain-killing opioids from the spinal cord, essentially closing the gate, blocking the pain.

“We can put the mind into different states and affect or influence its ability to fight back the pain that it's experiencing in the body,” said Spiegel.

Clarke went from using relaxing scenic VR for his acute, post-surgery pain, to specific training modules that helped him manage his chronic pain.

“I mean, I was on it every day, multiple times a day, and I really realized the effect it had when the nurse came in one day. Because before this I'd take pain medicine every four hours on the dot. The nurse comes in and she said ‘it's been about six hours and you haven't called for your pain medicine,’ and I hadn't even noticed,” said Clarke. “That’s when I realized that this virtual reality could actually help me manage my pain,  and that would allow me, eventually, to get off the pain medicine.”

Chronic pain is the next area Spiegel is focusing on. His latest study compares a group of long term pain sufferers who use modules that teach meditation, positive thinking, and breathing techniques, with a group who also get additional, one-on-one Cognitive Behavioral Therapy sessions.

“It's about being able to change perspective about your own mind and body to gain new insights and then, hopefully, to have new skills that you can apply in those moments of pain and suffering,” said Spiegel. “Buddhist monks spend 10,000 hours, actually in some cases 30,000 hours, learning how to meditate. If you take MRI scans of the brain of people undergoing VR, it looks a lot like a Buddhist monk.”

“The breathing techniques helped me to relax my body and put it into a state that allows me to heal,” said Clarke. “My pain would be at an eight or nine when I woke up every morning and my whole day was focused around managing my pain. That was my life for three to four years. Now I wake up and I'm pain free.”

Clarke said these days, he’s only using his headset once or twice a week for about 30 minutes. “Now because my yoga and meditation practice is so important, I don't need it as much,” said Clarke. 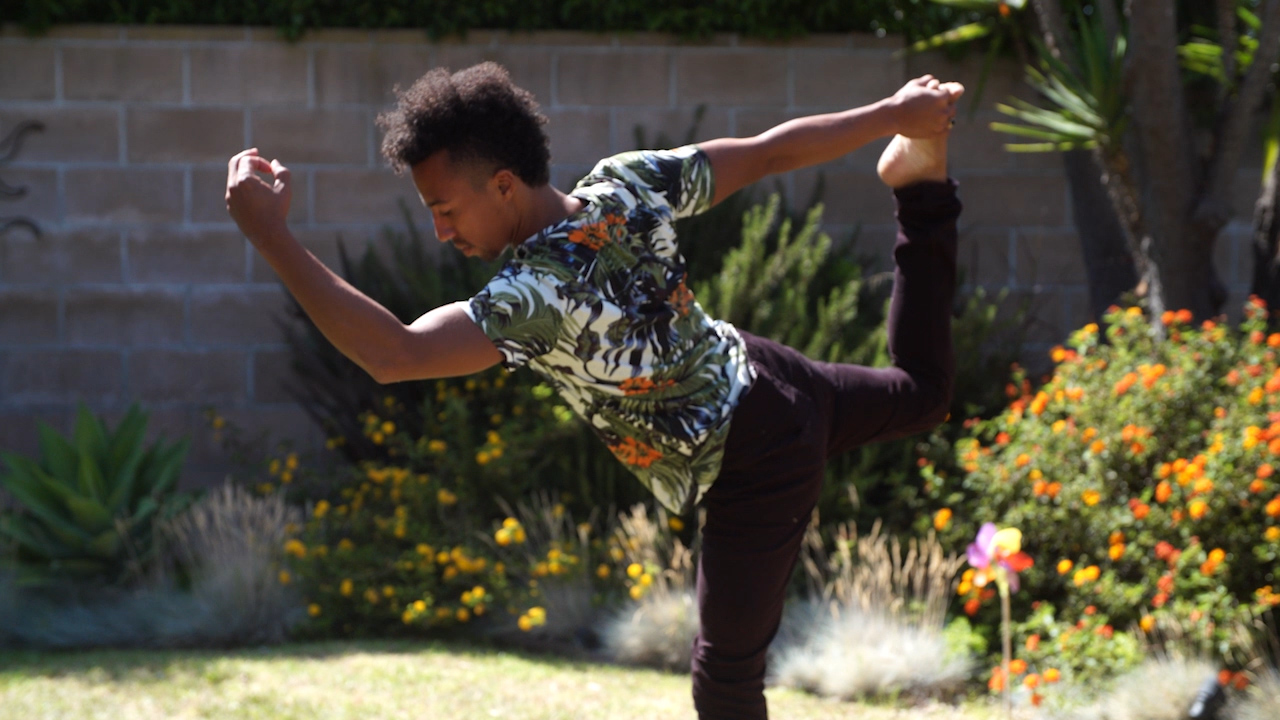 It will take some time before there is hard data on whether VR works for chronic, ongoing pain management. What we do know is that it did work for Harmon and even for Tom Norris, who has struggled with chronic pain for nearly three decades.

“I can ignore pain. I think that's a difference for me. I know it's there. But it's like it's over here as opposed to right here,” said Norris. “Like right now the pain in my lower spine is spiked so I take that and I visualize it and I box it in. And when I'm really good I can take that box, and to use an old Star Trek term I can teleport, I can throw it out of here.”

Norris cautions that VR hasn’t been a curative treatment and he has no expectations that it will be. “I don't know anybody who can offer you a cure for chronic pain. I mean, I use the VR on a day-to-day basis. I do epidurals say once, four months or six months, depending on where it is.”

It has though, helped to improve his quality of life. “Long-term, it's gonna be all the tools I have, including VR, faith and the love of my wife that keeps me going. And my attitude.”

Attitude is key, and points to the power mindfulness can have over pain. “We do have the ability to change our perception of reality. VR is just a training tool, a vehicle to teach you how to do that,” said Spiegel. “We don't want people to live in VR forever. We want people to learn skills in the VR that they can then take with them out into the real world.”

Some people and researchers, are skipping the tech all together and heading straight to age-old practices like yoga and meditation. In part three - we delve into the mind body connection.