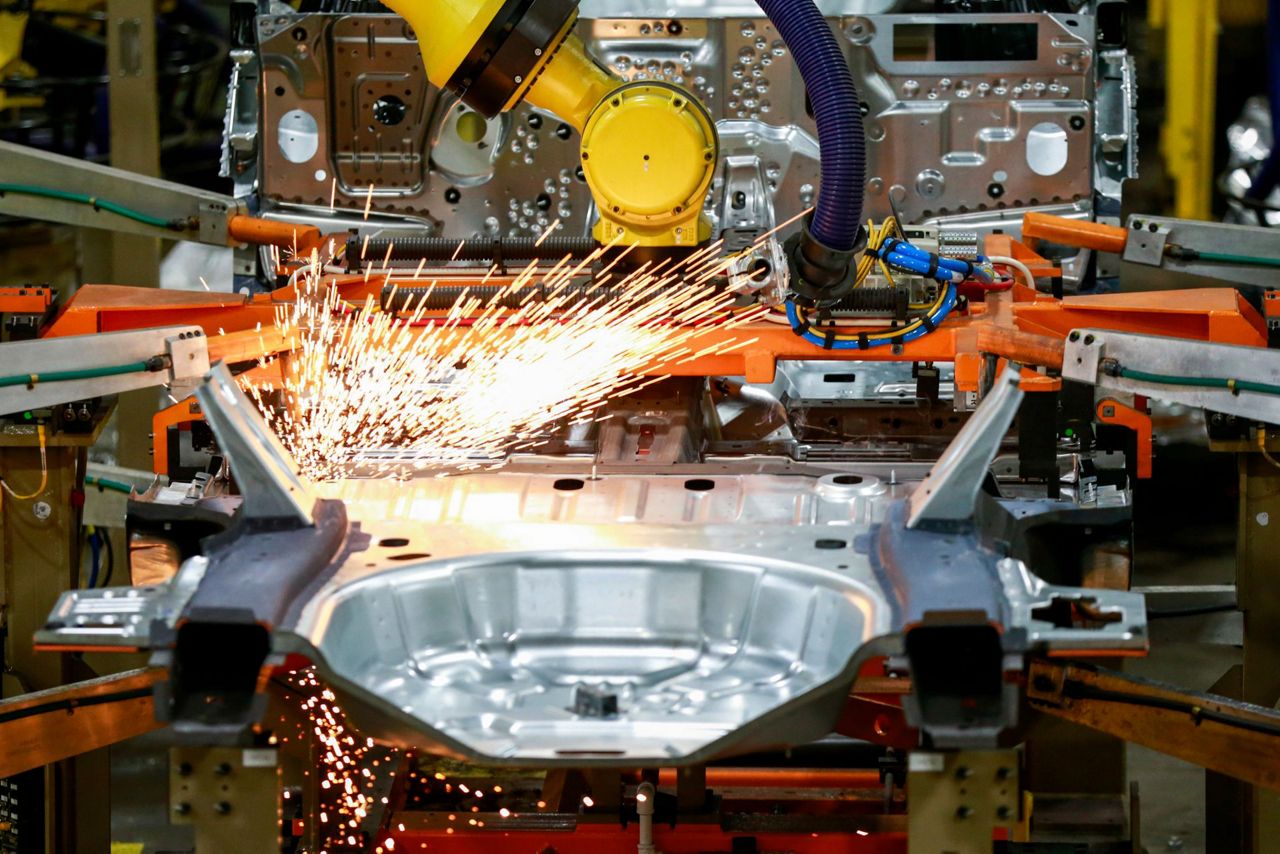 FILE - In this June 24, 2019, file photo machines work on a Ford vehicle assembly line at Ford's Chicago Assembly Plant in Chicago. American factories expanded at a faster pace last month, continuing a rebound from the coronavirus recession. The Institute for Supply Management, an association of purchasing managers, reported Tuesday, Sept. 1, 2020, that its manufacturing index climbed to 56 in August from 54.2 in July. (AP Photo/Amr Alfiky, File)

US manufacturing activity jumps to 3-year high in February

WASHINGTON (AP) — U.S. manufacturing expanded in February at the fastest pace three years with the arrival of a surge in new orders.

The Institute for Supply Management reported Monday that its gauge of manufacturing activity rose to a reading of 60.8% last month, 2.1 percentage-points above the January level of 58.7%.

It was the strongest performance since February 2018. Any reading above 50 indicates expansion in the manufacturing sector. The 60.8% reading last month matched a similar reading in February 2018 and the level in those months was the highest since a reading of 61.4% in May 2004.

The survey found optimism increasing with five positive comments for every cautious comment, up from a 3-to-1 ratio in the January survey.

Timothy Fiore, chair of the ISM manufacturing survey panel, said the survey shows that a recovery is ongoing as manufacturers find ways to deal with supply-chain shortages and lingering pandemic issues such as short-term shutdowns at some plants to sanitize facilities.

Manufacturers are also benefiting from a shift in spending, with Americans spending money on homes and other projects rather than going out to restaurants or risking shopping indoors, Fiore said.

“They are buying all kinds of items that the manufacturing economy builds,” he said. “As long as parts of the services sector are shut down, Americans are spending on hard goods.

However, manufacturers are having to wrestle with lengthening delivery times for components at many factories. Michael Pearce, a senior economist at Capital Economics, said that reflected in part “increasing global shortages of electronics and in particular semiconductors.” He said these shortages could hold back the recovery in manufacturing output in coming months.

A widening global shortage of semiconductors for auto parts is forcing major auto companies to halt or slow vehicle production just as they were recovering from pandemic-related factory shutdowns.

“The comments in the report also make it crystal clear that these shortages go well beyond just semiconductors with firms in every sector reporting shortages and problems with suppliers keeping up with demand,” Pearce said.

Other analysts said they believed manufacturing would be able to overcome the supply chain issues.